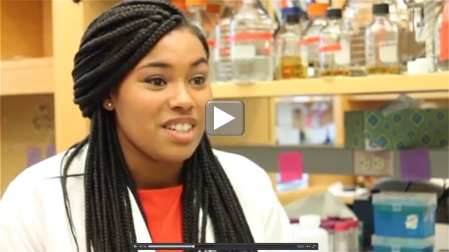 As long as she can remember, Ashley Matthew wanted to be a medical doctor. She took every opportunity to pursue her dream, including shadowing physicians to learn more about what a career in health care is really like. But, as Matthew explains in today’s LabTV video, she also became attracted to the idea of doing research because of her affinity for solving problems and “figuring things out.”
So, Matthew decided to give biomedical research a try, landing a spot in an undergraduate summer program sponsored by the University of Massachusetts. Ten weeks later, she was convinced that her future in medicine just had to include a research component. That’s why Matthew is now well on her way as an M.D./Ph.D. student at the University of Massachusetts Medical School, Worcester, where she works in the lab of Celia Schiffer.
The Schiffer lab takes a multidisciplinary approach to drug resistance—a major and costly problem for modern medicine that affects millions of patients. Matthew works specifically on drug resistance in people infected with the hepatitis C virus. New drugs have made it possible for many patients to be cured of this infection, but sometimes the drugs stop working. She wants to understand why and to use the information to design new drugs to treat patients more effectively.
Growing up in Boston, Matthew saw very few people of color working as physicians or scientists. As she pursues this path, Matthew has made it a priority to advocate for other minorities and “show them that they too can reach their desired goals.”
Matthew has been fortunate to have the support of her parents and six siblings, including a twin sister who, remarkably enough, is pursuing an M.D./Ph.D. at UMass right alongside her! Matthew found additional support through the Student National Medical Association (SNMA), a Washington, D.C.-based organization committed to supporting underrepresented minority medical students and addressing the needs of underserved communities.
Her SNMA mentors have helped her “grow as a person,” she says. “I hope to do the same for others.”
Links:
LabTV
Schiffer Lab (University of Massachusetts Medical School, Worcester)
Student National Medical Association (Washington, D.C.)
Science Careers (National Institute of General Medical Sciences/NIH)
Careers Blog (Office of Intramural Training/NIH)
Scientific Careers at NIH