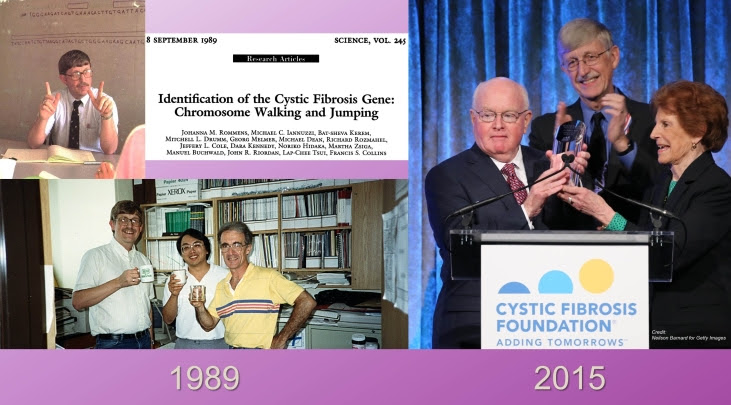 It’s been more than a quarter-century since my colleagues and I were able to identify the gene responsible for cystic fibrosis (CF), a life-shortening inherited disease that mainly affects the lungs and pancreas [1]. And, at a recent event in New York, I had an opportunity to celebrate how far we’ve come since then in […]

Caption: Lower left, me, Lap-Chee Tsui, and John Riordan celebrating our discovery of the cystic fibrosis gene. Right, Robert J. Beall, me, and Doris Tulcin at a November Cystic Fibrosis Foundation event honoring Dr. Beall.
It’s been more than a quarter-century since my colleagues and I were able to identify the gene responsible for cystic fibrosis (CF), a life-shortening inherited disease that mainly affects the lungs and pancreas [1]. And, at a recent event in New York, I had an opportunity to celebrate how far we’ve come since then in treating CF, as well as to honor a major force behind that progress, Dr. Bob Beall, who has just retired as president and chief executive officer of the Cystic Fibrosis Foundation.
Thanks to the tireless efforts of Bob and many others in the public and private sectors to support basic, translational, and clinical research, we today have two therapies from Vertex Pharmaceuticals that are targeted specifically at CF’s underlying molecular cause: ivacaftor (Kalydeco™), approved by the Food and Drug Administration (FDA) in 2012 for people with an uncommon mutation in the CF gene; and the combination ivacaftor-lumacaftor (Orkambi™), approved by the FDA in July for the roughly 50 percent of CF patients with two copies of the most common mutation. Yet more remains to be done before we can truly declare victory. Not only are new therapies needed for people with other CF mutations, but also for those with the common mutation who don’t respond well to Orkambi™. So, the work needs to go on, and I’m encouraged by new findings that suggest a different strategy for helping folks with the most common CF mutation.
In a recent study in the journal Nature [2], an NIH-funded team at The Scripps Research Institute, La Jolla, CA, reports that the most common CF-causing mutation, which results in the deletion of just one amino acid out of 1480, dramatically reshapes the ways in which that protein interacts with other proteins within the cell—its “interactome”. Consequently, drugs that take aim at key components of this interactome might offer new opportunities for CF treatment.
As a quick refresher, the cystic fibrosis transmembrane conductance regulator (CFTR) gene that we identified in 1989 encodes a gated channel for chloride ions, which normally serves to maintain the balance of salt and water in the lungs and other organs. CF patients with the most common CFTRmutation, called F508del, produce a form of the CFTR protein that is misfolded and degrades prematurely. As a result, the protein fails to reach its proper destination at the cell membrane, resulting in an accumulation of thick, sticky mucus in the respiratory tract that can lead to chronic lung infections and eventual respiratory failure.
Orkambi™ targets the CFTR protein in ways that help to restore the form and function of ion channels in many—but not all—patients with two copies of the F508del mutation. This situation prompted the Scripps team, which included Sandra Pankow, Casimir Bamberger, and John Yates III, to wonder if there might be other ways to rescue those ion channels. To learn more, the researchers devised a system, which used bronchial epithelial cell lines grown in lab dishes, to chart the interactomes of normal CFTR and F508del CFTR proteins.
The result was a surprisingly long list of 638 proteins. While the majority of the proteins interacted with both normal and F508del CFTR, more than 200 significant differences were found. Most notably, the interactome of F508del CFTR was remodeled in ways that caused it to interact with many proteins that its normal counterpart did not—sort of the biological equivalent of falling into the wrong crowd!
Next, the researchers used short snippets of RNA to block, one by one, more than 50 of the proteins on that list of 638. The goal was to find out whether interfering with certain protein interactions might keep the cells from degrading the F508del CFTR channels and help to restore their function. Those experiments revealed that the activity of the mutant channels in human cells was partially restored by blocking CFTR’s interaction with seven of those proteins. The results suggest drugs that block those interactions in a similar manner might have the ability to rescue F508del CFTR, and researchers are now looking for compounds that might hold such promise.
Even more fundamental, this work has opened the door to a comprehensive, interactome-based approach for further exploring the molecular mechanisms of CF, as well as other diseases that arise when a protein loses its normal shape. In fact, the researchers note that many of the proteins found to interact exclusively with F508del CFTR (as opposed to normal CFTR) have been implicated in other diseases, including Alzheimer’s disease and other neurodegenerative disorders, in which proteins are misfolded or aggregate incorrectly. This frequently happens in biomedical research: study of one disease unexpectedly reveals important information about other totally different conditions.
References:
[1] Identification of the cystic fibrosis gene: chromosome walking and jumping. Rommens JM, Iannuzzi MC, Kerem B, Drumm ML, Melmer G, Dean M, Rozmahel R, Cole JL, Kennedy D, Hidaka N, Zsiga M, Buchwald M, Riordan JR, Tsui LC, Collins, FC. Science.1989 Sep 8;245(4922):1059-65.
[2] ΔF508 CFTR interactome remodeling promotes rescue of cystic fibrosis. Pankow S, Bamberger C, Martinez-Bartolome S, Lavallee-Adam M, Balch WE, Yates JR. Nature. 2015 November 30. [Epub ahead of publication]
Links:
What Is Cystic Fibrosis? (National Heart, Lung, and Blood Institute/NIH)
Genetics Home Reference: Cystic fibrosis (National Library of Medicine/NIH)
Yates Lab (The Scripps Research Institute, La Jolla, CA)
NIH Support: National Heart, Lung, and Blood Institute; National Institute of General Medical Sciences; National Institute on Aging; National Institute of Diabetes and Digestive and Kidney Diseases