Water is the foundation for life. Learn more about the vital role safe water plays in our lives and what CDC is doing to address challenges to our water supply.
People use water every day to meet their domestic, industrial, agricultural, medical, and recreational needs. Access to public water sources that are safe and reliable is crucial for the health and prosperity of a society.
May 4-10, 2014 is Drinking Water Week. This observance is sponsored each year by the American Water Works Association (AWWA) and a number of other organizations and agencies. Following the theme "What do you know about H2O?" Drinking Water Week provides an opportunity for the public to recognize the essential role drinking water plays in our daily lives, with special attention on the ways in which all water consumers can get to know their H2O (1). 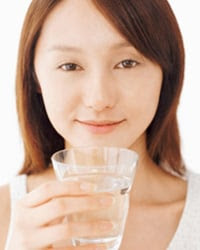 Tap water not only provides Americans with water for daily activities (like drinking, bathing, and cooking), but also is used to deliver fluoride to reduce the potential for tooth decay.
During the past century, many improvements in the health, prosperity, and longevity of the U.S. population can be attributed to improvements in water quality. Water treatment and disinfection have made U.S. tap water one of the safest and healthiest drinking water supplies in the world (2).
In 1908, Jersey City, New Jersey, was the first city in the United States to begin routine disinfection of a municipal drinking water supply (3). Over the next decade, thousands of cities and towns across the United States began disinfecting their drinking water. This disinfection led to a dramatic decrease in cases of waterborne illness (diseases spread through water) and death (4).

As a result of environmental regulations, such as the Clean Water Act (passed in 1972), many sources of water pollution—particularly sewage—have been reduced over the years. However, treating water to remove or kill disease-causing contaminants is still critical. Contamination of drinking water sources can occur at multiple points, including in the source water, through inadequate water treatment, in storage tanks, and in drinking water distribution systems (the pipes that carry water to homes, businesses, schools, and other buildings).
consumer confidence report (CCR). This report gives information on local drinking water quality, including the water's source, the levels of contaminants found in the water, problems with the water treatment system which may have occurred, and how customers can get involved in protecting their drinking water.

EPA regulations that protect public drinking water systems do not typically apply to privately owned wells (although some states do regulate private wells). As a result, millions of Americans who get their water from private wells are responsible for ensuring that their water is safe from contaminants. A local health department or well water system professional can provide assistance on well maintenance, new well construction, and water quality testing. For more information on well maintenance and testing, visit CDC's Private Ground Water Well page.

The Future of Tap Water

Although the United States has one of the safest drinking water supplies in the world, new challenges require us to continue to work to protect our water supply. A primary concern is the fact that our drinking water infrastructure, which includes the pipes that bring water to our homes, is aging (up to 100 years old in some cases!) and needs to be upgraded or replaced. Cracked pipes, water main breaks, and other age-related infrastructure issues increase the risk for water contamination and can lead to boil water advisories. Other challenges include climate change impacts on water availability and quality, chemical and toxin contamination of water sources, and the emergence of new ways to obtain and use water.

CDC works to address these drinking water challenges through its water-related research, prevention, and policy activities and programs, including:

How to protect and improve well water quality

Other drinking water and health-related resources