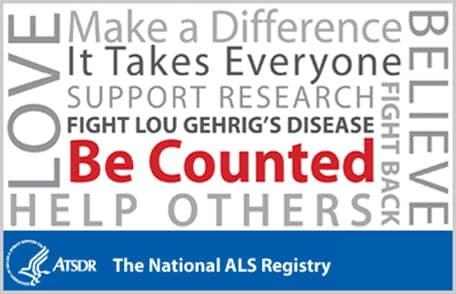 May is ALS Awareness Month. Far too little is known about ALS (Lou Gehrig's disease). Learn more about how the National ALS Registry is changing that.
Many people know amyotrophic lateral sclerosis (ALS) as Lou Gehrig's disease, named after the famous baseball player who retired in 1939 because of it. But far too little is known about what causes this disease.
The National ALS Registry is a ground-breaking step in the fight against ALS. The Registry collects and analyzes data about people with ALS. It gathers data about who has the disease and where it occurs. Researchers can use Registry data to detect disease pattern changes over time and identify whether there are common risk factors among ALS patients who are listed in the Registry. Patients and their families can turn to the Registry for updated links for resources such as ALS clinical trials. 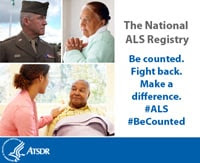 The goal of the Registry is to gather information that can be used to
Since the Registry's launch in late 2010, thousands of ALS cases have been identified and enrollees from all 50 states have taken part. ATSDR expects to make the first Registry report available by spring 2014 and will release subsequent reports annually.
In addition to enrolling persons with ALS, additional features have been added to enhance the Registry for both patients and researchers.
No accurate picture exists showing who has ALS. But the more people living with ALS participate in this Registry, the more accurate the picture will become.
Learn more about the National ALS Registry today!
Publicado por salud equitativa en 4:29