Prevent the Spread of Norovirus

Millions of people get sick from norovirus each year. It causes sudden vomiting and diarrhea, and spreads quickly and easily to other people. If you think you have norovirus, stay hydrated and take steps to keep it from spreading.
Norovirus is very contagious. When you are sick with norovirus, you can shed billions of virus particles in your vomit and poop. It only takes a few of these particles to make someone sick.
You are most contagious
However, you may still be able to spread norovirus for two weeks or more after you feel better.

You Can Spread Norovirus in Many Ways

If you are sick with norovirus, you can spread it to other people by having close contact, such as by caring for, preparing food, or sharing food or eating utensils with them. You can also spread norovirus to others by contaminating surfaces.

If you are sick with norovirus, do not prepare food for others while you have symptoms and for at least 2 days after symptoms go away. 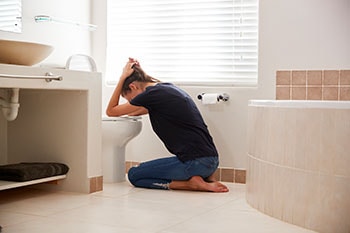 Most people who get sick from norovirus will have these symptoms:
Some people may also have a fever, headache, or body aches.
Norovirus can be more serious for young children, the elderly, and people with other health conditions. It can lead to severe dehydration, hospitalization and even death. To learn how to stay hydrated see norovirus treatment.
Most people sick with norovirus get better in 1 to 3 days.

19 to 21 million people get sick with norovirus each year in the United States. A person will get norovirus about 5 times during their lifetime. People of all ages can get norovirus.
You can get norovirus any time of the year, it is most common from November to April when outbreaks occur. Learn more about U.S. Trends and Outbreaks.