Leading the fight against HIV/AIDS in Cambodia: Q and A with Dr Vonthanak Saphonn - Fogarty International Center @ NIH

Leading the fight against HIV/AIDS in Cambodia: Q and A with Dr Vonthanak Saphonn - Fogarty International Center @ NIH

Leading the fight against HIV/AIDS in Cambodia: Q and A with Dr Vonthanak Saphonn 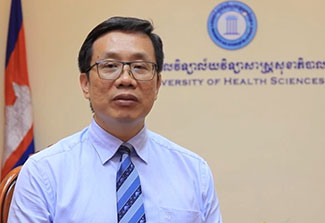 Vonthanak Saphonn, M.D., M.SC., PH.D.
Dr. Vonthanak Saphonn earned his medical degree in Cambodia at a time when the country, still recovering from war and genocide, was hit by HIV/AIDS. After working on an HIV surveillance program in Cambodia, he trained at the University of California, Los Angeles (UCLA) from 1999-2003 under a Fogarty program, becoming the first Cambodian to earn a Ph.D. in epidemiology. Returning home, he was named head of research at the National Center for HIV/AIDS, Dermatology and STIs and in 2007 founded the School of Public Health , which he led until his appointment as rector of the University of Health Sciences.

How has Fogarty affected your career?
Fogarty completely changed my career plan. After earning my medical degree, my dream was to become a pediatrician. But then I met Professor Roger Detels of UCLA in 1997 at a regional workshop he ran in Southeast Asia and became interested in epidemiology. In Cambodia prior to 2000, public health and research were very new and anyone who needed training had to go abroad. It’s a big switch from clinical practice to public health, but Fogarty allowed me to study in the U.S. and successfully make the transition.
What are some of your career milestones?
I was inspired by the UCLA/Fogarty program to return to Cambodia and nurture the next generation of researchers. So after becoming the first Cambodian to earn a Ph.D. in epidemiology through the Fogarty program at UCLA, I returned home with big ambitions: I wanted to establish a school of public health in Cambodia. With the support of my mentors at UCLA and the network they connected me with, my mission was accomplished in 2007 when Cambodia’s School of Public Health was opened, offering a master’s of public health and a master's of science in epidemiology. As of today, we’ve trained more than 200 students.
I was dean at the School of Public Health until 2011, when I was transferred to the University of Health Sciences, where the Ministry of Health named me rector in 2012.
What skills did your Fogarty training give you?
My Fogarty training equipped me with leadership, critical thinking, and team-based problem-solving skills that prepared me to meet public health challenges. I also learned how to network and was exposed to research, and through the teaching assistantships I had at UCLA, I gained experience of working in an academic setting.
How important is reciprocity to your programs?
Reciprocity is very important, regardless of whether a country is low- or high-income. Graduate students from the U.S. who want to go into global health come to Cambodia to study the large cohorts of patient populations with HIV, TB or malaria that we have here, and learn from our successes and challenges. For Cambodians, on the other hand, studying in the U.S. expands our horizons and minds. There are now three U.S.-trained Ph.D.s working at the School of Public Health in Cambodia, two of whom trained under the Fogarty program at UCLA.
What is your proudest achievement?
Fifteen years ago, Cambodia was ‘famous’ for having the highest HIV prevalence in the region. We had a lot of new infections, a lot of patients and no treatment. Today, Cambodia is ‘famous’ among Southeast Asian countries for a different reason - we’ve succeeded in significantly reducing the number of new HIV cases and, in 2017, UNAIDS recognized us for achieving the 90-90-90 target. This means 90 percent of Cambodians living with HIV know their HIV status, 90 percent of infected people are on antiretroviral therapy, and 90 percent of people on therapy have viral suppression. We are the only resource-limited country in Southeast Asia and one of just a handful of countries globally to achieve that goal. I am proud that the data on new and existing cases of HIV in Cambodia that my surveillance and research teams produced and analyzed were used by policymakers to plan and develop strategies to successfully combat HIV there.
How did Cambodia reach the 90-90-90 goal?
A lot of stakeholders got involved, including the government and international partners. But without a visible, functioning public health institution, it would have been very difficult to get a commitment from the Cambodian government to be part of the fight. It’s because we have such an institution and it had proven itself over the years that we were able to reach a challenging target like 90-90-90.