By Keynote ContributorDr. Matthew BlakeleyProf. Derek LoganInstitut Laue-Langevin (ILL)Lund University
Written by Dr. Matthew Blakeley, LADI-III beamline scientist at Institut Laue-Langevin (ILL) and Prof. Derek Logan, associate professor in structural biology at Lund University.
Galectins are sugar-binding proteins, characterised by their binding to a specific carbohydrate, galactoside, on the surface of other structures, and from which galectins derive their name. Many physiological functions essential to life rely on galectins including the regulation of inflammation, immune response, and cell-to-cell communication. On the other hand, they have been linked through their dysfunction to a number of serious diseases, including heart disease and cancer. 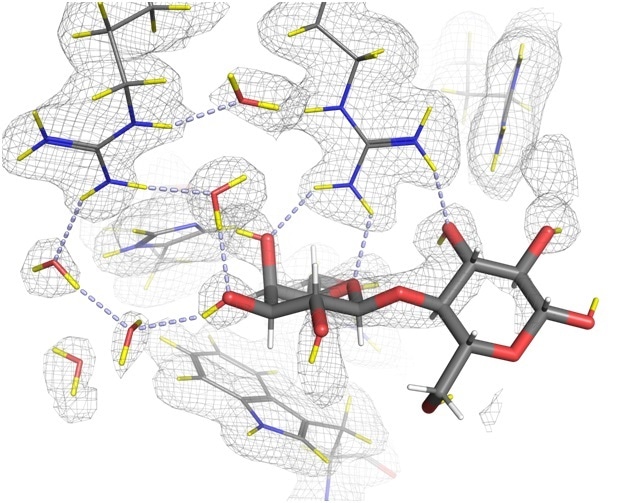 Research into the Effects of Galectins

Despite their importance, we still have much to learn about how these proteins work. For one, it is a mystery to researchers how such a small family, of only 15 different proteins as members, can have such a powerful and widespread effect in the body. They are distributed almost everywhere, throughout cells and tissues, from the intestines to the eye. Science is looking to ever-more powerful techniques in order to understand their structure and influence, recently harnessing the power of neutrons to investigate them.
As a family, galectins have the ability to bind to a massive range of proteins and cell types via sugars on their surface, and have many different functions. Their subsequent implication in such a large range of diseases has inspired the search for galectin specific inhibitors: drugs that disrupt the binding process, and prevent them from partaking in disease progression.
One member of the family is of particular interest to researchers: galectin-3. Galectin-3 has been associated with heart disease and breast cancer – the most common cancer in women worldwide, with 1.7 million new cases diagnosed in 2012 alone.
Its expression is increased in a variety of tumours, a factor thought to be linked to its role in cell-to-cell adhesion. It can enhance the adherence of cancerous cells to other cells in the body, including the extracellular matrix that connects many tissues in the body. This suggests it may also have a role in metastasis, the process by which cancer spreads throughout the body.
The development of a drug that blocks galectin-3’s role in the progression of cancer could have significant and widespread therapeutic effects. Yet until now, the exact mechanisms of galectin-3 binding have been based upon structures determined with X-rays, which even at high-resolution, do not reveal the positions of all the hydrogen atoms, which are known to play a key role in the binding.

In a collaborative effort, experts in neutron and X-ray crystallography from across the world came together to characterise the hydrogen bonding networks that are crucial in the role of galectin-3. Much of the research took place here at the world’s flagship neutron science facility, the Institut Laue-Langevin (ILL), where we house some of the most powerful instruments for investigating atomic structure.
Neutron crystallography, which involves an intense beam of neutrons fired at a sample, is particularly useful in examining biological macromolecules like the galectin proteins. Unlike X-rays, neutrons are a non-destructive probe, which do not damage the samples. As such, neutron diffraction experiments can be performed at room-temperature, close to physiological temperatures.
Using the LADI-III beamline at the ILL to collect neutron diffraction data, combined with data from X-ray crystallography, we managed to determine the exact positions of hydrogen atoms in the binding process, and gain a better understanding of the intricacies of the galectin-3 structure.
This may open the doors for future drug design that is able to accurately target and inhibit the binding process. By preventing the adhesion of galectins, new inhibitors may be able to stop tumour formation or disease progression.

The widespread regulatory effects of galectins demonstrate what a fascinating and important group of proteins they are. However, the diversity of their roles results in more areas where further research is essential to understand their part in disease. The development of cancer, and other chronic diseases including cardiovascular and autoimmune conditions, are complex processes, often involving the dysfunction of very ordinary cellular processes.
The multitude of roles played by each member of the galectin family in normal bodily processes equates to a huge selection of routes where they could have a minor negative influence. This can snowball into systems or processes that dysfunction entirely, leading to systematic illness and disease.
Consequently, it is essential to gain an in-depth understanding of the complexities of normal molecular processes, so that it becomes easier to pinpoint where things start to go wrong. By employing powerful analytical tools like neutron crystallography, we are able to obtain an unrivalled picture of the atomic structure.
This allows us to not only characterise processes with immense detail, but also identify potential targets for drugs with the greatest accuracy. Facilities like ours at the ILL, and other locations round the globe that provide such techniques, allow researchers to compile more information than ever before about the individual components of the body. This helps us understand structures such as galectins that are of the tiniest scale, but which have significant influence. 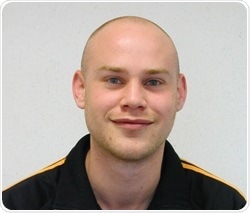 Matthew Blakeley is a research scientist at the Institut Laue-Langevin (ILL) in Grenoble. Graduating from Manchester University in 1999, Matthew completed his PhD in neutron crystallography in 2003, before undertaking postdoctoral research at the EMBL.
Since 2007, Matthew has been responsible for the LADI-III beamline at the ILL. Email: blakeleym@ill.fr 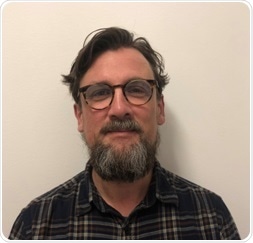 Derek Logan, associate professor in structural biology at Lund University
Derek Logan is a senior lecturer in structural biology at Lund University, Sweden. He graduated in Chemistry from Glasgow University in 1988 and obtained his PhD in virus crystallography from Oxford University in 1992. After postdoctoral work in Strasbourg and Stockholm, he has been at Lund University since 2001.
Until 2015 he was a part-time beamline scientist at the former MAX-lab synchrotron and started the structural biology CRO SARomics Biostructures in 2006. Email: derek.logan@biochemistry.lu.se
Disclaimer: This article has not been subjected to peer review and is presented as the personal views of a qualified expert in the subject in accordance with the general terms and condition of use of the News-Medical.Net website.
Publicado por salud equitativa en 9:52