We analyzed the highly pathogenic avian influenza (HPAI) H5 epizootic of 2016–17 in Europe by epidemiologic and genetic characteristics and compared it with 2 previous epizootics caused by the same H5 Guangdong lineage. The 2016–17 epizootic was the largest in Europe by number of countries and farms affected and greatest diversity of wild birds infected. We observed significant differences among the 3 epizootics regarding region affected, epidemic curve, seasonality, and outbreak duration, making it difficult to predict future HPAI epizootics. However, we know that in 2005–06 and 2016–17 the initial peak of wild bird detections preceded the peak of poultry outbreaks within Europe. Phylogenetic analysis of 2016–17 viruses indicates 2 main pathways into Europe. Our findings highlight the need for global surveillance of viral changes to inform disease preparedness, detection, and control.
Highly pathogenic avian influenza (HPAI) is a zoonotic notifiable disease that can cause high mortality rates in most domestic poultry and in some wild bird species. Since 2003, HPAI H5 viruses have been circulating in poultry in many countries (1). Periodically these poultry HPAI viruses have been reintroduced into the wild migratory bird population, representing a key risk pathway for its subsequent global spread (1–3). However, the effect of HPAI infection in both wild and domestic birds is variable and often strain-specific. Wild birds, particularly of the orders Anseriformes and Charadriiformes, are natural hosts of low pathogenicity avian influenza (4).
A passive surveillance system of testing wild birds found dead or sick for avian influenza has been in place in European Union (EU) member states since 2005 (Commission Decision 2005/94/EC, replaced with 2010/367/EU), with the objective of timely detection of HPAI subtype H5N1. Laboratory confirmation of HPAI infection following the development of clinical signs (passive surveillance) is the primary method of poultry surveillance in the EU member states, complemented by a serologic active surveillance program (5).
During epidemiologic year 2005–06 (epidemiologic years run from October to September of the next year), HPAI H5N1 clade 2.2 virus of the Guangdong H5 lineage spread to a number of countries in Europe, infecting poultry and wild bird populations (3). In 2014–15, another virus of the same lineage, HPAI H5N8 clade 2.3.4.4, was introduced into Europe and associated with variable disease severity, including subclinical infection in wild birds and domestic waterfowl (6). This H5N8 virus showed unprecedented intercontinental spread to the United States and Canada and was associated with both wild bird infection and, subsequent to local genetic reassortment, large HPAI H5N2 outbreaks in poultry (7).
In October 2016, a novel HPAI H5 clade 2.3.4.4 virus of the Guangdong lineage was detected in Hungary and was subsequently reported in other countries in Europe, infecting many poultry farms and causing both large-scale and sporadic deaths in wild bird populations. The hemagglutinin (HA) gene of this virus was considered phylogenetically distinct from the previous 2014 clade 2.3.4.4 viruses and was nominally suffixed by A (the 2016 clade) or B (the 2014 clade (8) but this subclade definition requires verification by the World Health Organization H5 nomenclature group. We describe the epidemiology and genetic characteristics of the 3 major wild-bird mediated epizootics in Europe associated with the Guangdong HPAI H5 lineage.

We collected data from the 3 major HPAI H5 epizootics in Europe: HPAI H5N1 in epidemiologic year 2005–06 (2); HPAI H5N8 in 2014–15; and HPAI H5 in 2016–17. For 2016–17, we collected data through July 31, 2017. We obtained epidemiologic data from the Animal Disease Notification System and the Directorate-General for Health and Food Safety, managed by the European Commission, and from country notifications sent to the EU Reference Laboratory for avian influenza (Animal and Plant Health Agency, Weybridge, UK).
We conducted analyses to describe each epizootic, examined the geographic and temporal spread (epidemic curves), and assessed differences in clinical illness and death rates. For spatial analysis, we grouped countries into 4 regions (North, South-West, South-East, and Central Europe) on the basis of the broad migration patterns of the major migratory water bird species affected by HPAI (Technical Appendix Figure 1) (9–14). A full description of the methods used is presented in the Technical Appendix.

We obtained virus HA gene sequence data from countries’ submissions to the EU Reference Laboratory and from GISAID (http://platform.gisaid.org.) We performed phylogenetic analyses on HA sequence data from each epizootic separately. We used IQ-TREE version 1.5.5 software (15) to infer maximum-likelihood trees with approximate likelihood ratio test (1,000 replicates) and bootstrap (100 replicates) support values for branches. We down-sampled each dataset using Cluster Database at High Identity with Tolerance to remove sequences with >99.9% sequence identity (16). We performed root-to-tip regression analyses using Tempest version 1.5 on the downsampled datasets (17). Then, we inferred Bayesian phylogenetic trees from each downsampled dataset using BEAST version 1.8.4 to determine the mean substitution rate and TMRCA (time to most recent common ancestor) (18). We annotated the final trees using FigTree version 1.4.3 (http://tree.bio.ed.ac.uk/software/figtree/). Details of criteria and priors used in the analyses are provided in the Technical Appendix.
Top

Figure 1. Morbidity (A) and mortality (B) rates as percentages of populations reported in infected poultry farms during 3 highly pathogenic avian influenza epizootics in Europe, 2005–06, 2014–15, and 2016–17. Years given are...
Ducks, geese, turkeys, and broiler chickens on average had higher illness rates in 2005–06 than in the other epizootics (Figure 1). In 2016–17, average mortality rate was lowest in ducks (7%) and turkeys (6%); few farms (<5%) reported a >25% mortality rate. In contrast, 32% of affected broiler farms and 27% of affected layer farms reported mortality rates >25%. In 2005–06, more than half of broiler farms reported mortality rates >25%. When comparing overall estimates, we found the observed poultry illness and death rates to be substantially higher in 2005–06 than in 2016–17. 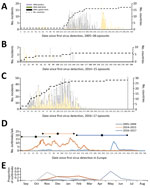 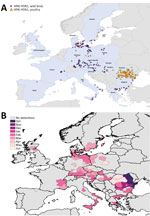 Figure 3. Geographic and temporal spread of the 2005–06 HPAI H5N1 epizootic. A) Location of each incident reported. Blue shading indicates countries where cases were reported. B) Month of first report of an... 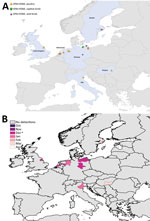 Figure 4. Geographic and temporal spread of the 2014–15 HPAI H5N8 epizootic. A) Location of each incident reported. Blue shading indicates countries where cases were reported. B) Month of first report of an... 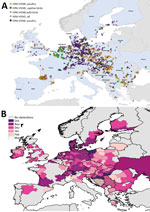 Figure 5. Geographic and temporal spread of the 2016–17 HPAI H5N8 epizootic. A) Location of each incident reported. Blue shading indicates countries where cases were reported. B) Month of first report of an...
We mapped a temporal-spatial analysis of the 3 epizootics (Figures 3,4,5). The data shown in Figure 5, panel B, suggest that, in the first 2 months of the 2016–17 epizootic, 2 different viral incursions may have occurred: one spreading through Hungary, Croatia, Switzerland, and southern Germany, and another spreading in northern Europe (Poland, Denmark, northern Germany, Sweden, and the Netherlands). The 2005–06 epizootic indicated a similar progression pattern, initiating in Romania and spreading up to northern Europe and down to southeastern Europe (Figure 3).
Comparison by region of Europe according to wild bird migratory patterns indicates poultry outbreaks were mostly observed in the South-East and South-West regions in 2005–06 and 2016–17 but in the North in 2014–15 (Technical Appendix Figure 4). Most wild bird detections were reported in the North and Central regions. Poultry detections by region were significantly different for the 3 epizootics (p<0.001 by Pearson χ2 test), whereas wild bird detections by region were only significantly different (p<0.001 by Pearson χ2 test) between 2005–06 and 2016–17. 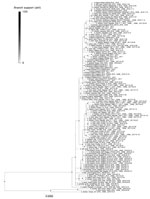 Figure 6. Maximum-likelihood tree from viral sequences of the 2016–17 highly pathogenic avian influenza H5 epizootic in Europe. Circles represent node support values, filled according to approximate likelihood ratio test values 0–100. Light...
Genetic analysis of the HA gene for the 2014–15 and 2016–17 epizootics shows the involvement of H5 clade 2.3.4.4 in all cases where data were available (Figure 6). Patterns found in maximum-likelihood trees are largely in agreement with the Bayesian analysis; however, a greater proportion of the clades remain unresolved in the maximum-likelihood trees (Figure 6; Technical Appendix Figure 8). The 2016–17 viruses form a distinct clade and can be clearly differentiated from the clade 2.3.4.4 viruses present in Europe in 2014–15. In agreement with the geospatial results, analysis of the HA gene of the viruses from the 2016–17 epizootic shows that most originate from a common progenitor (time to most recent common ancestor estimated May 2014–August 2015) (Technical Appendix Figure 8). However, these viruses differ in their evolutionary pathway thereafter, evolving in 2 co-circulating subclades without clear geographic restriction (time to most recent common ancestor March 2015–August 2016 [0.9 posterior probability] and November 2014–October 2015 [0.82 posterior probability]). This finding potentially indicates 2 major incursion pathways via wild birds.
We also found smaller clusters and singleton sequences including sequences from European viruses; viruses from 2014–15 form 1 subclade, estimated to have emerged in January–February 2014 (Figure 6; Technical Appendix Figure 8). The 2005–06 data show viruses in several subclades, but the branching pattern in this dataset is generally less distinct and many sequences remain unresolved.
BEAST analyses (http://tree.bio.ed.ac.uk/software/beast/) also revealed that the 2014–15 epizootic viruses show the highest mean substitution rate (measured per site per year), followed by 2016–17 and then by the 2005–06 epizootic, which is significantly lower (one-way analysis of variance p <0.001) (Technical Appendix Figure 6). These data are in agreement with the results of the root-to-tip regression analysis (Technical Appendix Figure 7), which show a much steeper slope for the 2014–15 epizootic compared with the others. However, the spread of the data is high for the 2016–17 epizootic, where the SD of rates is an order of magnitude higher than that for the 2014–15 epizootic and 2 orders greater than for the 2005–06 outbreak. The nucleotide diversity for each epizootic (Technical Appendix Figure 9) shows that per-site diversity (average pairwise nucleotide differences in a population) is lowest in the 2005–06 epizootic (0.0038), consistent with the lower substitution rate inferred from BEAST. The 2014–15 epizootic has the highest diversity (0.0086); the rate for 2016–17, calculated from viruses collected through June 2017, is 0.0063.
Top