By P Surat, PhD
Post-translational modification (PTM) of proteins refers to the chemical changes that occur after a protein has been produced. It can impact the structure, electrophilicity and interactions of proteins. 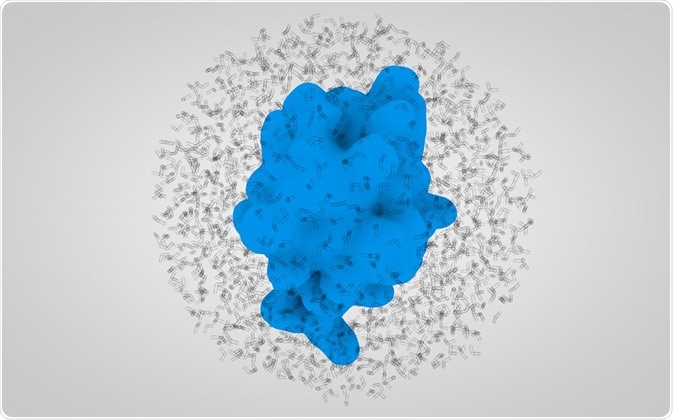 Phosphorylation
Reversible phosphorylation of proteins involves addition of a phosphate group on serine, threonine, or tyrosine residues and is one of the important and extensively studied PTM in both prokaryotes and eukaryotes.
Several enzymes or signaling proteins are switched ‘on’ or ‘off’ by phosphorylation or dephosphorylation. Phosphorylation is performed by enzymes called ‘kinases’, while dephosphorylation is performed by ‘phosphatases’.
Addition of a phosphate group can convert a previously uncharged pocket of protein into a negatively charged and hydrophilic protein thereby inducing conformational changes in the protein.
Phosphorylation has implications in several cellular processes, including cell cycle, growth, apoptosis and signal transduction pathways. One example is the activation of p53, a tumor suppressor protein. p53 is used in cancer therapeutics and is activated by phosphorylation of its N-terminal by several kinases.
Acetylation
Acetylation refers to addition of acetyl group in a protein. It is involved in several biological functions, including protein stability, location, synthesis; apoptosis; cancer; DNA stability. Acetylation and deacetylation of histone form a critical part of gene regulation.
Acetylation of histones reduces the positive charge on histone, reducing its interaction with the negatively charged phosphate groups of DNA, making it less tightly wound to DNA and accessible to gene transcription. Acetylation of p53, a tumor suppressor gene, is crucial for its growth suppressing properties.
Hydroxylation
This process adds a hydroxyl group (-OH) to the proteins. It is catalyzed by enzymes termed as ‘hydroxylases’ and aids in converting hydrophobic or lipophilic compounds into hydrophilic compounds.

Glycosylation
Glycosylation involves addition of an oligosaccharide termed ‘glycan’ to either a nitrogen atom (N-linked glycosylation) or an oxygen atom (O-linked glycosylation). N-linked glycosylation occurs in the amide nitrogen of asparagine, while the O-linked glycosylation occurs on the oxygen atom of serine or threonine.
Carbohydrates present in the form of N-linked or O-linked oligosaccharides are present on the surface of cells and secrete proteins. They have critical roles in protein sorting, immune recognition, receptor binding, inflammation, and pathogenicity. For example, N-linked glycans on an immune cell can dictate how it migrates to specific sites. Similarly, it can also determine how a cell recognizes ‘self’ and ‘non-self’.
AMPylation
AMPylation refers to reversible addition of AMP to a protein. It involves formation of a phosphodiester bond between the hydroxyl group of the protein and the phosphate group of AMP.
Lipidation
The covalent binding of a lipid group to a protein is called lipidation. Lipidation can be further subdivided into prenylation, N-myristoylation, palmitoylation, and glycosylphosphatidylinositol (GPI)-anchor addition.
Prenylation involves the addition of isoprenoid moiety to a cysteine residue of a substrate protein. It is critical in controlling the localization and activity of several proteins that have crucial functions in biological regulation.
Myristoylation involves the addition of myristoyl group to a glycine residue by an amide bond. It has functions in membrane association and apoptosis. In palmitoylation, a palmitoyl group is added to a cysteine residue of a protein.
In GPI-anchor addition, the carboxyl-terminal signal peptide of the protein is split and replaced by a GPI anchor. Recent research in human genetics has revealed that GPI anchors are important for human health. Any defects in the assembling, attachment or remodeling of GPI anchors lead to genetic diseases known as inherited GPI deficiency.

Proteolysis
Proteolysis refers to breakdown of proteins into smaller polypeptides or amino acids. For example, removal of N-terminal methionine, a signal peptide, after translation leads to conversion of an inactive or non-functional protein to an active one.