New findings reported in Human Reproduction, suggest that getting pregnant takes longer for women who consume too much junk food and not enough fruit, as well as having a decreased chance of conceiving within a year. 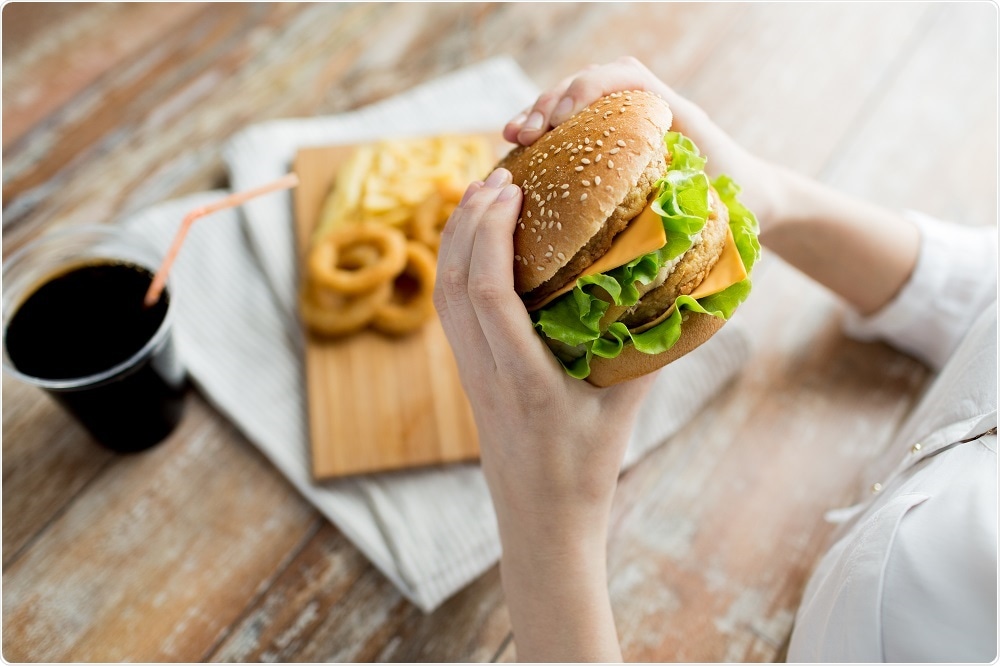 Credit: Syda Productions/Shutterstock.com
Researchers at the University of Adelaide's Robinson Research Institute interviewed 5590 women in the UK, Ireland, New Zealand and Australia about their eating habits. Midwives asked these questions during their initial antenatal visit for those who had not given birth before.
Professor Claire Roberts, Lloyd Cox Professorial Research Fellow, from the University's Robinson Research Institute, who led the study, said: "The findings show that eating a good quality diet that includes fruit and minimising fast food consumption improves fertility and reduces the time it takes to get pregnant."
Women who consumed fruit no more than one to three times in a month took 2 weeks longer to get pregnant than those who consumed fruit upwards of three times a day during the month prior to conception.
It was also found that those who ate fast food four or more times a week took almost a month longer to conceive. 2204 of the couples that took part in the study became pregnant within a month, while 2204 were deemed infertile, due to taking in excess of a year to conceive.
The likeliness of becoming infertile rose from 8% to 16% for women who consumed junk food four or more times a week, and 8%-12% for those who neglected their fruit intake.

We recommend that women who want to become pregnant should align their dietary intakes towards national dietary recommendations for pregnancy. Our data shows that frequent consumption of fast foods delays time to pregnancy."
Dr Jessica Grieger, The University of Adelaide

Research into  the effects of the maternal diet prior to conception has been hitherto lacking, as past studies have been more concerned with the impact that diet can have on women undergoing treatment for or classed as infertile.
The study presented here was conducted at the between 2004 and 2011 at the multi-centre Screening for Pregnancy Endpoints (SCOPE). 340 of the 5598 participants had received fertility treatments prior to conception, though the bulk of the women (5258) had received none.

Midwives obtained information regarding the participants diet and how long it took them to get pregnant as part of their initial antenatal visit at approximately 14-16 weeks’ gestation.
They wanted to establish details such as how often they ate fish, fruit, junk food and so on. Junk food consumed that originated from supermarkets was omitted from the analysis, which is considered an oversight in the study.
If couples were being treated on account of the male partner’s infertility, they were removed from the study. Importantly, most of the women in the study did not suffer from a history of infertility and the risk relationships were adjusted for BMI, maternal age, smoking and alcohol intake.
There were restrictions to this study, such as the researchers having to depend on women’s recollections of diets past, as opposed to using information that was fresh in the mind of participants.
Other factors, such as the fathers’ food intake, were not taken into consideration, so these cannot be dismissed nor confirmed as having an effect. Furthermore, the food range was not comprehensive. The most notable feature of this study was the size.
The team continue to pursue this area of interest, and intend to establish specific patterns in diets that can be linked to conception times, as opposed to separate food groups.

For any dietary intake assessment, one needs to use some caution regarding whether participant recall is an accurate reflection of dietary intake. However, given that many women do not change their diet from pre-pregnancy to during pregnancy, we believe that the women's recall of their diet one month prior to pregnancy is likely to be reasonably accurate."
Dr Jessica Grieger, The University of Adelaide