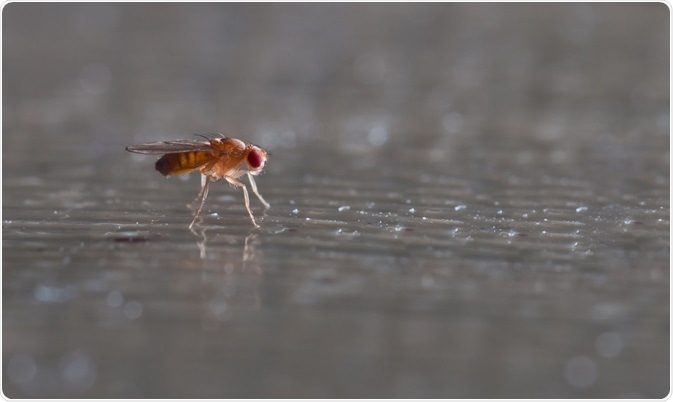 Image Credit: Roblan/Shutterstock.com
A wide variety of animals have previously been used for animal testing including mice, flies, and monkeys. A particularly useful model organism is Drosophila melanogaster (D. melanogaster), a type of fruit fly. This fly has become the main invertebrate model used to study developmental genetics. It has now been used for over a century.

Why are Drosophila such good model organisms?

Many different characteristics of D. melanogaster make it an ideal model organism. The major benefit of using Drosophila is that there are also no ethical issues surrounding their use, which is common for mammal models such as monkeys.
Short lifespan
One of the main advantages is its short life cycle, allowing fora large quantity of flies to be produced within a short period.
An embryo emerges within 24 hours of egg fertilization. This embryo then goes through three different larval stages eventually maturing into an adult Drosophila. Development of an adult fly only takes 10 days from fertilization.
The female fly can produce up to 1500 eggs in its lifetime thereby providing a constant supply of new Drosophila for genetic studies.
Minimal culturing requirements
Another advantage of Drosophila is that they are very small and thus, very easy to maintain. Due to their small size and minimal requirements, many Drosophila can be raised and tested within a small laboratory which does not have access time, space or funding.
Genetic manipulation
Genetic factors also make this fly an ideal model organism. D.melanogaster only has four pairs of chromosomes compared to 23 pairs in humans. This simplicity was one of the reasons why they were first used in genetic studies; Drosophila genes could be mapped easily to investigate genetic transmission.
The entire genome of Drosophila has been sequenced and annotated as the human genome. Comparatively, the fly’s genome is much smaller at 5% of its size.
However, when comparing the number of genes present in the genomes, 15,500 genes are present in the flies as compared to 2, 200 genes in humans. About 60% of the Drosophila genes are the same, as they originate from a common ancestor. Many of these shared genes are associated with cancer and other diseases, enabling investigation into qualities such as inheritance.
Anatomical features
Drosophila has anatomical features (such as wings and eyes) which allow for easy characterization. These genetic markers can be easily identified under a microscope.
Behaviors such as eating, mating, and sleeping that are observed in humans are also seen in Drosophila. Therefore, the possible effect of genetics upon human behavior can also be assessed.

Disadvantages of using Drosophila in geneticcs

Despite the advantages of using Drosophila to investigate human diseases, there are also several disadvantages. Firstly, the anatomy of the brain and other major organs within the fly are very different from humans.
Other issues include lack of methods to measure behavioral tendencies, lack of in-depth cognitive abilities, lack of an adaptive immune system and dramatically different drug effects when compared to human studies.

An example of a condition that has been studied in Drosophila is Fragile X syndrome. This condition is the most common form of inherited mental retardation with significant physical and mental impairments.
Studies have demonstrated that this condition is due to mutations within the Fragile X mental retardation 1 (FMR1) gene that is located on the X chromosome.
Genetic studies on Drosophila have revealed that mutations with the fly’s version of the FMR1 gene (known as dFMR in Drosophila) leads to a reduction in locomotor activity and increase in developmental milestones.
Changes within the neuronal structure have also been noted in these mutants. This example highlights how the use of this fly can help in providing value information on a particular genetic disorder.
Overall, D.melanogaster are very good model organisms for a number of reasons, but they also have their disadvantages. These flies have provided invaluable insights into disease which would not be possible within human models and have aided the search for suitable treatments.
Reviewed by Deepthi Sathyajith, MPharm