By Catherine Shaffer, M.Sc.
Ras genes encode proteins that can cause cancer (or become oncogenic) when mutated. All Ras proteins are GTPases which act as molecular switches in the cell, regulating signaling pathways and other interactions. 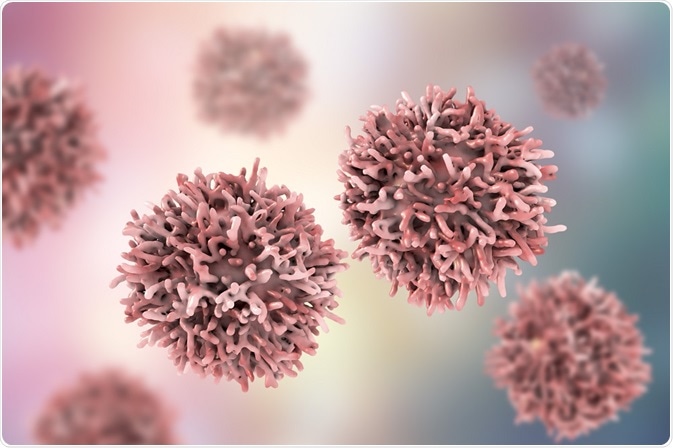 Image Credit: Kateryna Kon/Shutterstock.com
There are three Ras proteins, which are ubiquitously expressed in the body. These genes are; H-ras, K-ras, and N-ras. These genes participate in the Ras-Raf-MAPK pathway that is involved in critical life processes of cells.
Ras proteins are normally tightly regulated by factors that switch off the GTPase activity. Ras GTPase family proteins have a role in a number of processes including cell cycle progression, growth, migration, cytoskeletal changes, apoptosis, and senescence.

When Ras function is not properly regulated, hyper-proliferation can occur resulting in developmental disorders and cancer. Specific mutations at codons 12, 13, or 61 in the Ras genes is associated with tumors.
Those mutations favor constitutive activation of Ras, meaning that the gene is always “turned on,” and there is overproduction of the protein. The mutation also increases GTP binding, leading to overactivity.
Certain germline mutations in Ras and other members of the Ras-MAPK pathway lead to constitutive activation of the pathway, but to a lesser extent than that found in tumors. These types of mutations are linked to some developmental syndromes.
The neurofibromatosis 1 (NF1) gene codes for a Ras GTPase activating protein that causes neurofibromatosis type 1. Other members of the Ras pathway have been connected to syndromes like Noonan, Costello, cardiofaciocutaneous, Legius, and Leopard syndromes. Ras activation can also contribute to other diseases like non-obese diabetes and diabetic retinopathy.