By Amrita Roy, MSc
Heat shock proteins (HSPs) are a type of intracellular protein which are abundant in the cells of the human body. 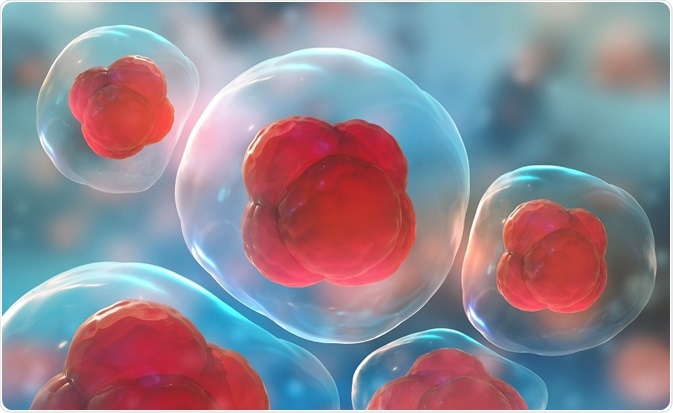 Image Credit: Yurchanka Siarhei/Shutterstock.com
HSPs are expressed in the organism to overcome stress. Certain heat shock proteins are called chaperones. Under physiological and stressed conditions, chaperones play a crucial role in energy-dependent protein folding process.
When nucleotides bind to ATP-dependent chaperones, it changes their conformation and affinity towards substrate proteins from low to high.
The Italian scientist Ferruccio Ritossa first studied the heat shock response in 1962 in Drosophila (fruit fly) where synthesis of these proteins increased in response to heat shock and hence he named as ‘heat shock proteins’.

Heat shock proteins are categorized into five major families based on their molecular weight, structure, and function. These are HSP100, 90, 70, 60, and the small HSP (sHSP)/a-crystallins. Heat shock proteins or chaperones have major role in the following processes:

Protein unfolding, misfolding, or aggregation occurs in stressed conditions and this stimulates the stress response resulting in the initiation of transcription of proteins. Interaction between heat shock factor (HSF1) with heat shock elements in the HSP gene promoter regions results in HSP gene transcription.
HSF1 in unstressed state remains in the cytoplasm. In stressed conditions, it becomes hyper-phosphorylated. Once the HSF1 is converted to phosphorylated trimers, it binds DNA and translocates to the nucleus from cytoplasm. The protein homeostasis is negatively influenced by the HSPs. HSPs can also downregulate the activity of HSF trimers.

HSPs are considered as emerging therapeutic targets for both humans and veterinary medicine. HSP90 is thought to be a potential contender in the diagnosis, prognosis, and treatment of cancer. Moreover, HSP70, HSP60, and the small HSPs are also potential targets to manage  neurodegenerative disease, ischemia, cell death, and autoimmunity.
HSP in neurodegenerative diseases
Due to limited therapeutic options, neurodegenerative diseases are challenging to the healthcare. Studies report that HSPs, HSP70 and HSP27 can protect the neurons from multiple adverse conditions.
Previous studies have also reported that overexpression of HSP70 can delay the progression of Parkinson disease and Alzheimer disease. Hence, HSP70 could be a potential therapeutic target for neuro-degenerative diseases.
HSP in cancer
HSP90 and other co-chaperones are responsible in the folding of 200 proteins involved in various signalling pathways and they also play a role in refolding of denatured proteins after stress.
Several kinases including certain key members of malignant transformation are stabilized upon interaction with HSP90. Thus, HSP90 proteins play a major role in the development, proliferation, and survival of different types of cancer and potential anti-cancer effects are observed upon  inhibiting HSP90.
HSP in reproduction
During germ cell development, HSP production is increased and they are considered the first proteins produced at the time of embryo growth. Various aspects of reproduction are influenced due to the presence or absence of HSP in many species. According to the several studies, HSPs are expressed continuously and play significant role through all stages of spermatogenesis.
HSP in transplantation
HSPs are involved in allograft rejection and autoimmunity. Various HSPs including HSP27, HSP60, and HSP70 are expressed in renal allografts. Studies report that increased expression of HSP70 gene and protein are associated with rejection of cardiac allografts.
Reviewed by P Surat