By Catherine Shaffer, M.Sc.
Bioprinting is a method for constructing living tissues through three-dimensional (3D) printing of cells. 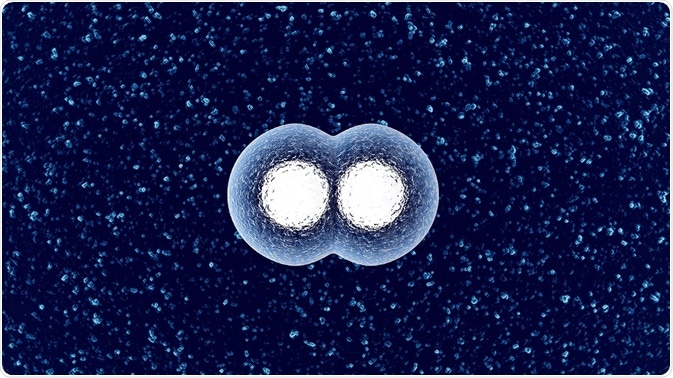 Credit: Spectral-Design/Shutterstock.com
Bioprinters produce tissues layer-by-layer, as a 3D printer does for plastic and metal materials, with a printhead head moving in all directions to place cells where they are needed.
One of the earliest bioprinters was developed by Makoto Nakamura. He noticed that standard inkjet printers output droplets of ink which are roughly the same size as human cells.
Makoto adapted inkjet technology to create a functioning bioprinter in 2008 that printed an artificial blood vessel. He used an alginate hydrogel with a nozzle from a commercial inkjet printer mixed with a substrate made from a calcium chloride solution.
Although modeled on conventional 3D printing, bioprinting is vastly more complex. Recreating tissues and organs also requires the recreation of structures and functions within the tissue, including signaling networks, cellular interactions, multiple cell types, and physiological activity.
Conventional tissue engineering approaches typically use some sort of fabricated 3D scaffold to build up the 3D cell structure. However, those approaches are not able to reproduce complex inner structures of the tissues.
Bioprinting has an advantage in that its additive approach allows reproduction of fine 3D structures within the tissue with precise control of the positioning of cells.

3D printers have typically used non-biocompatible inks, often containing toxic organic solvents or made under harsh environmental conditions. Development of biocompatible inks has been one of the first challenges to overcome in bioprinting. A four-level classification system has been proposed for 3D printer inks. The categories are as follows:

An ideal bioink for organ fabrication should have two main qualities. First, it should have optimal physicochemical properties. Second, it should be cytocompatible and able to reciprocate cell-mediated matrix remodeling during growth, maturation, and regeneration of tissue.
Other qualities that should be considered in a bioink include viscosity, viscoelasticity, gelation kinetics, hydration, and biodegradation. Real raw materials such as extracellular matrix, biomolecules, and live cells are optimal for bioprinting.

A number of different technologies have been developed to enable bioprinting.
Jetting-based bioprinting
This type of bioprinting resembles an inkjet printer. Structures are created through layering of bioink droplets on a substrate. Droplets can be generated through a thermal technique, by a piezoelectric actuator, through the use of a laser, or by pneumatic pressure.
Jetting-based bioprinting techniques have good resolution, but can be slow. It is also not a good technique to use with high viscosity materials, since they would not form the necessary picoliter volumen droplets.
Extrusion-based bioprinting
In an extrusion-based system, continuous filaments of a hydrogel mixture are dispensed to fabricate the structure. This method can accommodate a wider variety of materials than jetting-based bioprinting.
Integrated bioprinting
Some hybrid bioprinting technologies combine a synthetic biopolymer with a cell-containing hydrogel to create tissue constructs with higher mechanical strength. The synthetic portion of the material lends support to 3D structures.