Imagine if scientists could zap a single cell (or group of cells) with a pulse of light that makes the cell move, or even turns on or off the cell’s vital functions.
Scientists are working toward this goal using a technology called optogenetics. This tool draws on the power of light-sensitive molecules, called opsins and cryptochromes, which are naturally occurring molecules found in the cell membranes of a wide variety of species, from microscopic bacteria and algae to plants and humans. These light-reacting molecules change their shape or activity when they sense light, so they can be used to trigger cellular activity, such as turning on or off ion flow into the cell and other regulatory pathways. The ability to induce changes in cells has a broad range of practical applications, from enabling scientists to see how cells function to providing the basis for potential therapeutic applications for blindness, cancer, and epilepsy.
Opsins first gained a foothold in research about a decade ago when scientists began using them to study specific electrical networks in the brain. This research relied on channelrhodopsins, opsins that could be used to control the flow of charged ions into and out of the cell. Normally, when a neuron reaches a certain ion concentration, it is triggered to fire, but neuron firing can be changed by inserting opsins in the membrane. Neuroscientists figured out how to incorporate light-sensitive opsin proteins by inserting the opsin gene into the host’s DNA. The genetically encoded opsin proteins in the neuronal membranes could be turned on or off by shining light into the brain itself, using optical fibers or micro-LEDs, to switch on or off the flow of ions and neuron firing.
Since those early studies in the brain, the optogenetics field has come a long way. But the leap from brain cells to other cells has been challenging. Scientists first needed to find a way to deliver light into tissues deep in the body. And, unlike stationary brain cells, they needed a way to target cells that are on the move (such as immune cells). They also needed to develop a way to study not only cell networks but also individual cells and cell parts. The NIGMS-funded researchers highlighted below are among the scientists working to overcome these obstacles and are using optogenetics in new and inventive ways. 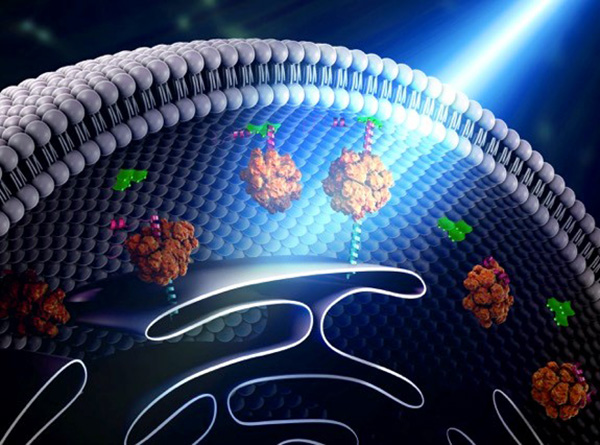 Illustration shows how “bridges” can be built within a cell through the use of light-reacting molecules. The light triggers proteins to line up within the cell, making it easier to shuttle molecules between the membranes of two subcellular organelles. This optogenetic strategy is helping scientists to control cell function with a simple beam of light. Illustration courtesy of Yubin Zhou.
Building Bridges
Yubin Zhou

of Texas A&M is using optogenetics to control the way cells communicate and to study immune cell function. In one line of research, Zhou is using light to make it easier for calcium ions to enter cells. The ions carry instructions for the cell and also help tether small cellular structures (called organelles). Those inter-membrane tethers allow for the movement of  proteins and lipids back and forth across the cell, and are critical for sending chemical messengers to communicate information (see illustration). When this process is disrupted, it can lead to extreme changes in cell function and even cell death. Using this technology to “switch on” normal pathways enables the scientists to better understand how such processes can be disrupted.
Going Wireless
In another line of research, Zhou and his collaborator Gang Han

at the University of Massachusetts Medical School are combining optogenetics with nanotechnology to establish a way of remotely controlling immune cells. This technology helps to overcome a key obstacle in optogenetics by allowing the scientists to reach deep within tissues using tiny light-switchable particles (called nanoparticles).
This wireless technology is made possible because the nanomaterials can absorb near-infrared light far away from outside the tissue and then convert it into visible light locally. Because nanoparticles can move within the body, they can be targeted to specific cell types or tissues in the living body to provide the light needed to activate optogenetic proteins.
As noted by Zhou, “The potential impact of this wireless nano-optogenetic technology is likely to be broad and profound.” He further added that one tangible therapeutic application of this technology may be combining it with immunotherapy to fight cancer. Using this technology, the particles could be dispatched to activate T-cells—the immune system’s prominent tumor attackers—at a desired time and location.
Tracking Movement
Over time, additional light-reacting proteins have joined channelrhodopsins as scientists look to expand the uses for optogenetics. For example, cryptochromes, which are important in sleep and wake cycles, have helped usher in a distinctly different type of optogenetics that researchers are using to control processes at the subcellular level and to study individual cell behavior.
Researchers are now applying subcellular optogenetics to better understand how cells move as well as how they divide and multiply. Narasimhan Gautam

and colleagues from Washington University-St. Louis are using optogenetic strategies to control cell communication (signaling activity) and the mechanical forces at play when cells invade surrounding tissues. Specifically, Gautam’s group is examining whether cells move from the front by crawling forward, or move from the back, like rolling up a toothpaste tube. They activated molecules either in the front or back by selectively focusing light. By simultaneously monitoring the molecular and cellular activity using live cell imaging methods, the researchers can see how this migration occurs and can even direct migration at will.

Example of a macrophage cell undergoing optogenetically driven cell migration. Credit: O’Neill et al., Mol Bio Cell, 2016.
Said Gautam, “We anticipate this approach will help us to identify how dynamic interactions between signaling activity, cytoskeletal changes, and plasma membrane mechanics govern cell migration and, in the long term, help us to apply this knowledge to inhibit pathological migration [seen in cancer].”
Expanding the Optogenetic Tool Kit
Today’s optogenetic research is effective but also hampered by the limited numbers of proteins available for use in these studies. Researchers now are looking for ways to generate synthetic light-regulated proteins. Michael Lin

and colleagues at Stanford University are developing FLIPs (or fluorescent light-inducible proteins) that they can use in place of any protein.  According to the researchers, FLIPs offer advantages over traditional optogenetic methods; they’re generalizable, meaning they can work in place of a variety of protein targets without needing to be modified. The proteins are 100 percent genetically encoded, so they don’t require help from enzymes (or cofactors) to activate them. They also feature built-in “reporters” that enable scientists to easily track them and to see their activity throughout the body. Finally, these new proteins are useful at lower levels of light, making them a good choice for deep tissue locations.
Chandra Tucker