By Sally Robertson, BScMarch 27, 2018
Scientists at the Wyss Institute for Biologically Inspired Engineering have achieved the first step in eliminating cells with deleterious point mutations. The team converted the CRISPR/Cas9 gene editing tool into a genome surveillance tool, in an effort to develop a more effective way of fighting disease. 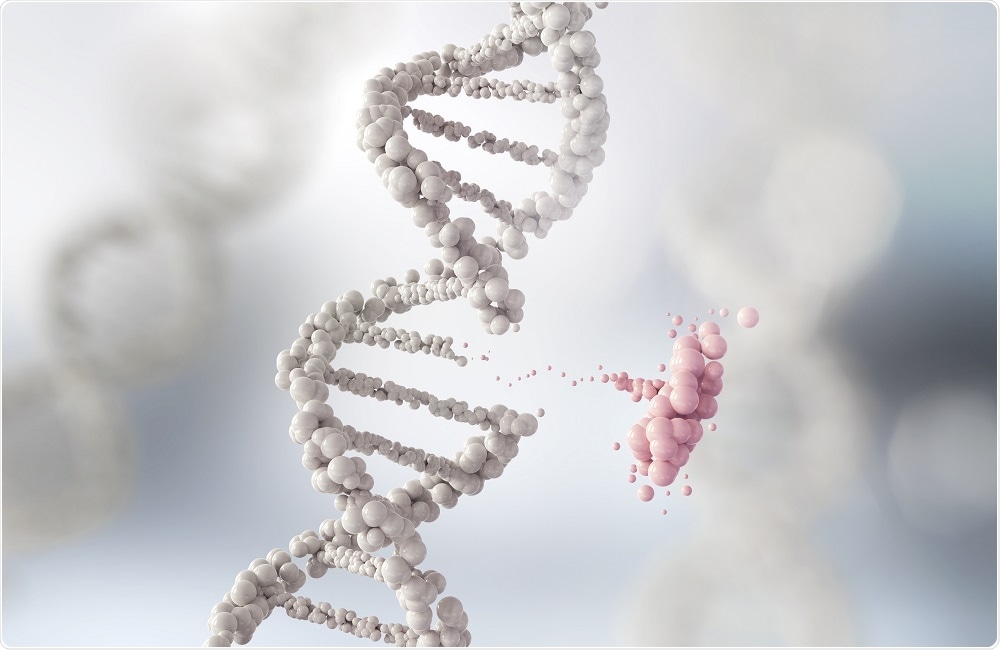 Credit: Anusorn Nakdee/Shutterstock.com
Point mutations are changes to single nucleotides in the genetic DNA code that cause many life-threatening diseases. They can turn a single cell into a cancerous cell that then grows uncontrollably, or cause life-threatening infections by making bacteria resistant to antibiotics.

As reported in the Proceedings of the National Academy of Sciences, the researchers developed an in vivo mutation prevention method that uses the CRISPR/Cas9 genome engineering system as a genome surveillance tool.
The technique uses the DNA-cleaving Cas9 enzyme to distinguish between genomic target sites that differ by a single nucleotide and cut out the unwanted one. In proof-of concept studies led by Wyss Institute Core Faculty members George Church and James Collins, the technique prevented the survival of antibiotic resistant variants of bacterial E.coli.
"The mutation prevention system maintained antibiotic sensitivity not only in E. coli strains cultured in standard laboratory conditions but also in bacteria that were used to colonize the gastrointestinal tract of gnotobiotic mice,” says co-first author Benjamin Pruitt.
“These multi-day mouse experiments involved sustained antibiotic dosing and demonstrated that the system is robust even when subjected to potentially significant environmental pressures.”
Aside from the potential the method holds for preventing disease, the team also believe that the tool could be used more immediately in the biotech industry to prevent large-scale cultures from acquiring mutations that cause them to be unproductive or susceptible to contamination, and to study microbial evolution.
Wyss Institute Founding Director, Donald Ingber, says the research has resulted in an entirely new innovation in the CRISPR/Cas9 field that could lead to new ways of preventing and treating a broad range of diseases.

We are now able to prevent often occurring mutations that confer antibiotic resistance and ask which other genetic changes could lead to the same result. This may improve our understanding of resistance mechanisms and potentially offer new therapeutic entry points."
James Collins, The Wyss Institute for Biologically Inspired Engineering