By Hannah Simmons, BSc
The TP53 is a gene that instructs the cell to produce tumor protein (p53) ; a vital transcription factor and tumor suppressor. P53 is known as the “guardian of the genome” as it helps in regulating the cell cycle and acts as a tumor suppressor. 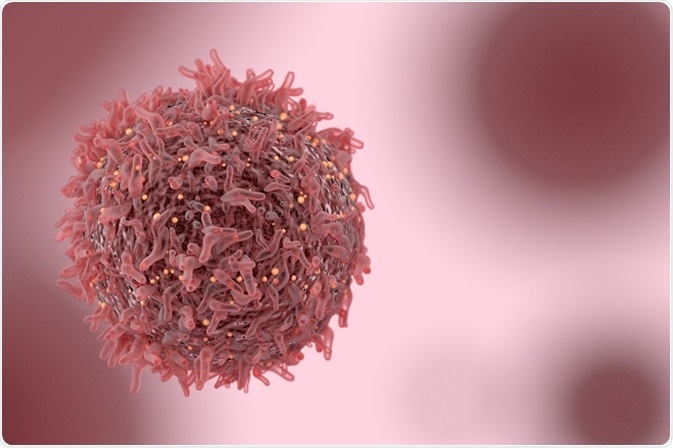 Credit: CI Photos/Shutterstock.com
The human TP53 gene is located on the 17th chromosome and was identified by Arnold Levine, William Old and David Lane in 1979. The first suggestion that p53 existed was due to an investigation made into Simian Virus 40 (SV40). The SV40  virus was infected into mice, targeted an unknown protein and gave rise to cancerous cells. The protein in question was eventually identified as p53.
The name p53 was originally given to this protein as it was observed to weigh 53 kilo Dalton (kDa) when analyzed through a technique called SDS-PAGE. However, it has since been shown that it is only 43.7 kDa and the higher weight observed in the SDS-PAGE technique was due to proline residues which impeded the migration of the protein.

TP53 and the cell cycle

Recent studies have shown that p53 is involved in cell cycle control, induction of apoptosis, and protecting cells from harmful mutations. When DNA is mutated by mutagens such as ultraviolet (UV) radiation, p53 binds and stimulates the production of p21. The p21 protein further binds to cell division-stimulating protein (cdk2), preventing the cell from proceeding to the next stage of cell division.
Once the cell cycle is halted, p53 can activate the transcription of other genes responsible for DNA repair. If the damaged DNA can be repaired, then proteins involved in DNA repair will be transcribed and once repaired, the cell will continue to progress in the cell cycle. However, if the DNA is too damaged, then programmed cell death will be induced. Some of the target gene involved in cell growth, repair and death are Bax, Apaf-1, Gadd45 and 14-3-3σ.
Apart from cell cycle control p53 has been suggested to be involved in biological aging of cell, immunity, destruction of cells, and development of new blood vessels.

The p53 is highly controlled as, excessive levels can lead to premature aging by increased cell death. In normal cells, MDM2 binds to p53 to prevent it from binding to DNA and thus preventing degradation of DNA. Alternately, in stressed cells, kinases phosphorylate the p53 and prevents it from binding with MDM2, allowing a dramatic increase in p53 levels. This overall leads to increased DNA binding and activation of downstream target genes.

P53 as a tumor suppressor in cancer

Inherited or somatic mutations in TP53 can result in loss of cell cycle control. In cells where P53 has been lost, the cell cycle cannot be halted. These cells are said to be “immortal”, as they grow uncontrollably and often develop into cancerous tumors.
Approximately, 40% of breast cancers have somatic TP53 mutations. Individuals with this mutation often have a more aggressive form of cancer which reoccurs frequently and has poor prognosis. Somatic mutations in TP53 have also been found in other cancer types, such as bladder cancer, lung cancer and ovarian cancers.
Inherited TP53 gene mutations are also responsible for certain types of cancers. Individuals who only inherit one functional copy of p53 have a condition called Li-Fraumeni syndrome, in which numerous tumors are seen at a relatively young age. Over 140 different types of inherited mutations have been identified for the TP53 gene in these individuals, with many of them located in the DNA binding domain of p53. These mutations prevent p53 from binding to mutated DNA, which further stops the p21 production and the cell cycle is continued.
Certain types of pathogen can also affect the p53 protein. The Human papillomavirus (HPV) encoded protein (E6) binds and inactivates p53, preventing cell cycle control and leading to cancer.

As loss-of-function of p53 by mutation is seen in various cancers ,the introduction of functioning p53 may help in preventing further uncontrolled cell division. Vectors such as, non-replicating viruses and nanoparticles are currently being investigated to find a suitable DNA-delivery vehicle to allow the introduction of p53 back into these cells. This will allow control of the cell cycle and prevention of further tumor growth.
In conclusion, TP53 is a crucial gene encoding the  p53 protein. The protein is essential for the control of the cell cycle. The loss of function of the protein can lead to various types of cancers. However, the introduction of p53 may serve to be a promising therapeutic option for individuals with loss of p53 function by mutations.
Reviewed by Yukti Singh, M. Pharm