By Hannah Simmons, BSc
CRISPR-Cas13 is an RNA editing technique that can alter protein sequences without modifying the genome in a cell. Recent advances in CRISPR-Cas13 technology mean that it can now be used to locate and even reduce cancer associated gene expression. 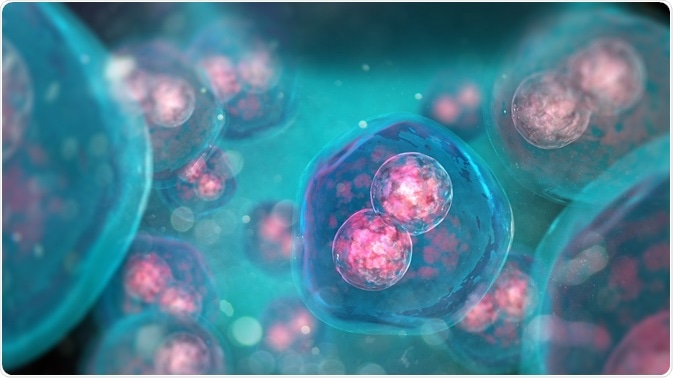 Credit: Andrii Vodolazhskyi/Shutterstock.com
Deoxyribonucleic acid (DNA) contains all the genetic information of an cell. When a protein needs to be synthesized, relevant genes are transcribed into ribonucleic acid (RNA), which is further processed and transported out of the nucleus. Translation of RNA forms a specific sequence of nucleic acids which leads to production of a specific protein.
Manipulation of nucleic acid sequences can serve as a promising and valuable treatment option for a range of genetic diseases. By altering the disease associated sequences to code for functional protein product, diseases could be treated or even cured.
One of the methods used to alter nucleic acid sequence is  clustered regularly interspaced short palindromic repeats (CRISPR)-Cas technology, which can be precisely programmed to alter nucleic acids. These “molecular scissors” not only provide potential cures for genetic diseases, but also provide further insights into single gene diseases, such as cystic fibrosis.

The CRISPR family originates from a bacterium, where it acts as an immune response to viral threats. Palindromic sequences are found to be interspaced between regions of viral DNA from previous bacteriophage infections. CRISPR associated system (Cas) genes are also located nearby, coding for endonucleases and helicases.
Attacking bacteriophage inject their DNA into the cytoplasm and take over the cell to replicate. With the CRISPR-Cas system, viral DNA is cut into fragments which are stored at a CRISPR locus. These loci can be transcribed and resulting RNAs can be used to detect future bacteriophage DNA, thereby acting as an acquired immune response.

The traditional CRISPR-Cas system is the Cas-9 system, first identified in Streptococcus Thermophilus. Once cas-9 is introduced into the cells, special designed guide RNA is used to direct the Cas9 endonuclease to cut the DNA in a highly specific manner. Once  fragmented, the cell can repair the broken DNA using DNA repair mechanisms including non-homologous end joining (NHEJ) and homology directed repair (HDR).This leads to alterations  in the sequence of DNA. This alteration further leads to permanent changes in nucleic acid sequence and can be used to cure genetic conditions. However, permanently changing the genome possess several risks and unknown side effects.

Recent advances have led to the development of CRISPR-Cas13 system, which knocks down messenger RNA. Since RNA codes for the sequence of nucleic acids produced, editing the sequence of RNA can therefore temporarily edit gene expression without the serious risks associated with permanent changes to the genome.
This could be used in the treatment of acute diseases and temporary reduction in inflammation during organ transplantation. In addition to the possible therapeutic roles, the CRISPR-cas13 system can also provide insights into RNA processing in disease, for example RNA editing and alternative splicing.
Since the changes to gene levels are only transient, this allows scientists to investigate the possible gene knock outs which could cure disease. The RNA levels can be returned to normal once the CRISPR-cas13 system is removed from the cell.. Due to this the changes would not be passed onto the offsprings. Some diseases are also caused due to abnormally high levels of RNA from a specific gene. Therefore, this system could be used to treat these diseases without permanently effecting the genome which could lead to disastrous side effects.
A recent study by Zhang et al has shown that one member of the cas 13 family, CRISPR-Cas13a, can be used to reduce cancer-assocaited gene expression. The researchers also managed to design a fluorescently tagged version of this endonuclease that does not cleave the target RNA, but instead binds and allows localization analysis.

One of the major future challenges for the use of CRISPR-cas13 technology as a treatment option is suitable method of delivery into human tissues. Additionally, major ethical issues involved in editing the DNA, including worries over genome editing and genetic enhancement in embryos. However, this technology could enable a new and revolutionary approach for both treating and curing genetic diseases.
Reviewed by Yukti Singh, M. Pharm