CDC Vital Signs March 2018 Release: Opioid Overdoses Treated in Emergency Department: The new CDC Vital Signs reports on the increasing number of emergency department (ED) visits for opioid overdoses across the United States between July 2016 and September 2017. Data from CDC’s National Syndromic Surveillance Program (NSSP) BioSense platform in 52 jurisdictions in 45 states showed opioid overdose rates increased 30%.
MMWR: Overdose Deaths Involving Opioids, Cocaine, and Psychostimulants — 31 U.S. States and the District of Columbia, 2015–2016
Opioids were involved in more than 42,000 overdose deaths in America in 2016, two-thirds of all of drug overdose deaths. This reflects a 28% increase in the opioid-involved death rate since 2015. This increase appears to be driven by the doubling of the rate of synthetic opioid overdose deaths (other than methadone), likely resulting from use of illicitly manufactured fentanyl (IMF). There were also increases in overdose deaths from prescription opioids and heroin as well the other drug categories examined.
This report examines demographic and geographic characteristics of deaths involving opioids for prescription opioids, heroin, and synthetic opioids (other than methadone). This study also examined deaths from cocaine and psychostimulants with abuse potential. Overdose death rates were examined from 2015–2016 by age, sex, racial/ethnic group, and urbanization level in the US overall, and for specific states.


Announcements
Upcoming 2018 RxSummit – Next Week
The National Rx Drug Abuse & Heroin Summit is the annual gathering for stakeholders to discuss what is working in prevention and treatment. The Rx Summit starts this Monday, April 2nd and ends April 5th. Be a part of the international discussion on addressing the opioid crisis.
Research Grants for the Primary or Secondary Prevention of Opioid Overdose (RFA-CE-18-006) 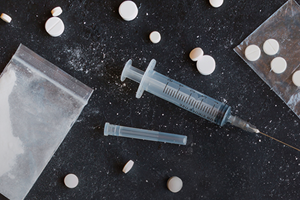 CDC’s Injury Center intends to commit up to a total of $15,750,000 over a 3-year project period for up to 7 awards; each award with a maximum of $750,000 per award per year, for a total of $2,250,000 per award over the project period. This funding will support research that expands and advances our understanding about what works to prevent opioid overdose. Specifically, the research will either develop and pilot, or rigorously evaluate, novel primary or secondary preventive interventions that address fatal and nonfatal overdose from prescription opioids, illicit opioids, or both. For more information about funding intent and possible strategies for considerations visit grants.gov.
Important Dates: Letter of Intent Due: 04/12/2018 and Application Due: 05/15/2018
White House Opioid Initiative
President Trump announced a new Initiative to address the ongoing opioid crisis. The Opioid Initiative will address factors fueling the epidemic, including drug supplies, over-prescription, and insufficient access to evidence-based treatment, primary prevention, and recovery support services. In addition to the new Opioid Initiative, the Crisis Next Door website was launched where Americans can share their personal stories about opioid addiction and recovery.
Publicado por salud equitativa en 6:41