Advice for healthy older adults: Get the new shingles vaccine 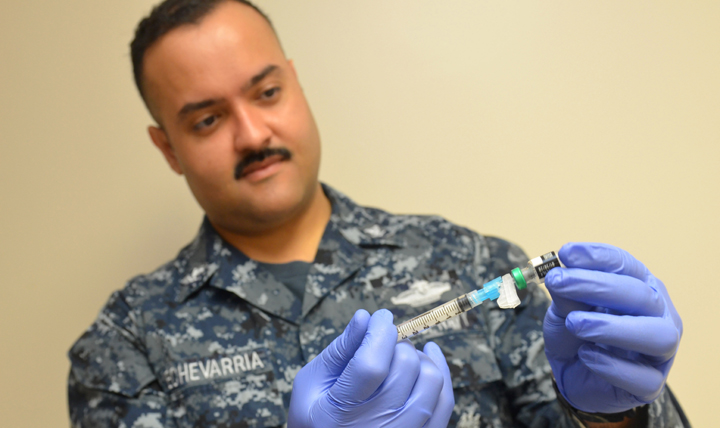 
FALLS CHURCH, Va. — A new shingles vaccine is rolling out across the Military Health System, and health care experts say it’s a game changer. The vaccine, Shingrix, is recommended for healthy adults 50 and older to prevent shingles, a painful skin rash that can have debilitating long-term effects for older people.
“Who’s at risk for getting shingles? Anyone who’s had the chickenpox,” said retired Air Force Col. David Hrncir, an allergist-immunologist at Lackland Air Force Base in San Antonio.
According to medical literature, Hrncir said, “Anywhere from 90 to 99 percent of people now over the age of 40 had chickenpox, before there was a chickenpox vaccine. About one-third will get shingles at some point in their lives, if they’re not protected.”
An earlier shingles vaccine was introduced in 2006, said Hrncir, who’s also director of the Defense Health Agency Immunization Healthcare Branch Regional Vaccine Safety Hub. But that vaccine was for people 60 and older when it first came out, and only about 70 percent effective in offering full protection against the virus.
“People who had the old vaccine will benefit from getting the new one,” Hrncir said. “Also, shingles can recur. So even if you’ve already had shingles, get the new vaccine.”
The Centers for Disease Control and Prevention offers recommendations about those who should not get the new vaccine.
A virus called varicella zoster causes shingles. It’s the same virus that causes chickenpox. After chickenpox clears, the virus stays dormant in the body. Health care experts don’t know why, but the virus may erupt many years later as shingles.
Shingles usually develops as a stripe across one side of the body or face, according to the Centers for Disease Control and Prevention. People may feel pain, itching, or tingling in the area where the rash occurs a few days before it actually appears, the CDC said. Other symptoms may include fever, headaches, and chills.
A few days after the rash appears, it turns into fluid-filled blisters, Hrncir said. They usually scab over after a week or 10 days, and then the scabs clear up a couple of weeks after that, he said.
But the pain may persist even after the rash clears. Some people develop postherpetic neuralgia, or PHN, Hrncir said.
“The older you are when you get shingles, the more likely it is you’ll develop PHN and have longer-lasting and severe pain,” Hrncir said. “And it’s pain that’s not easily treated. So you’re left with this constant pain that can significantly affect quality of life.”
Soon-Ja Boyette of Stafford, Virginia, understands that all too well. More than five months after getting shingles, the 75-year-old Army widow still experiences shooting pain from underneath her left breast to the top of her backbone, the path of her shingles rash.
“I’m getting better,” said Boyette, who goes to Fort Belvoir Community Hospital in Virginia. “The pain isn’t nearly as bad as it used to be. Every day, I’m praying, praying, praying that it’s finished.”
Hrncir said the new vaccine is a two-dose series, with the second dose administered anywhere from two to six months after the first. A majority of patients have reported side effects for two or three days after vaccination, he said. They include headaches, fatigue, and nausea. The CDC recommends patients talk with their providers about possible side effects.
“Frankly, if that’s the extent of it, I’m willing to go through it and get the vaccine so I can avoid shingles later on,” said John Acton, a retired Coast Guard rear admiral. Acton said he’s planning to talk with his provider at Walter Reed National Military Medical Center in Bethesda, Maryland, about getting vaccinated, even though he had the original shingles vaccine several years ago.
“I’m aware of how challenging it can be to have shingles,” Acton said. His parish priest had a disfiguring facial shingles rash, Acton said, and his mother had shingles when she was in her early 70s. “It was very difficult for her,” he said, “and very painful.”
Hrncir said Lackland began Shingrix vaccinations in February. Current availability at other military treatment facilities may vary because it’s a new vaccine, said Air Force Lt. Col. Heather Halvorson, deputy chief of the Defense Health Agency Immunization Health Care Branch. Patients should contact their local MTF to verify the vaccine is available, she said.
Learn more about TRICARE coverage of the shingles vaccine.
Publicado por salud equitativa en 7:34