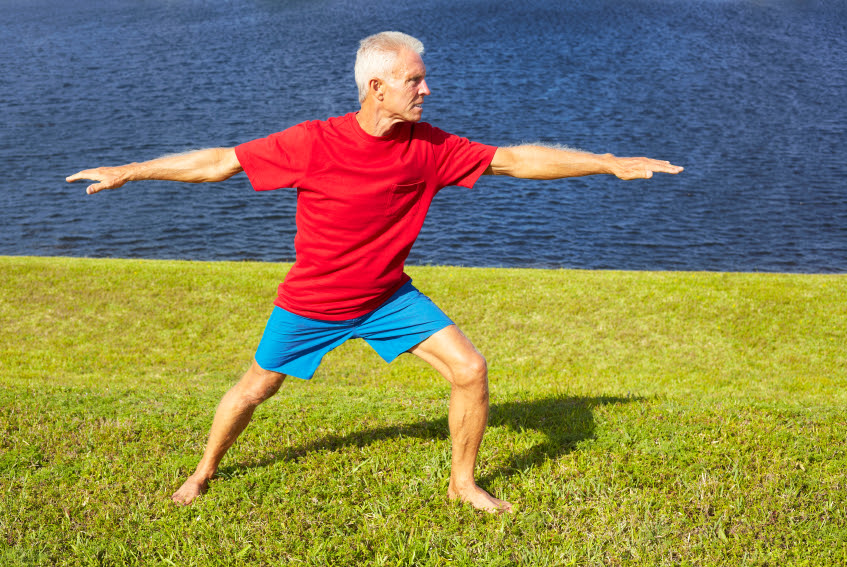 Decades of research show that yoga can reduce the emotional and physical fatigue brought on by cancer treatment. In 2017, scientists reported for the first time that this is also true specifically for men undergoing treatment for prostate cancer. Men who took a yoga class twice a week during prostate cancer radiation treatment reported less fatigue, fewer sexual side effects, and better urinary functioning than men who did not.
The research team enrolled 50 men ages 53 to 85 who were diagnosed with early or advanced nonmetastatic prostate cancer. Of them, 22 were assigned to yoga classes and the rest did not participate in yoga. All the men received scheduled radiation treatments; 29 of them were also on hormonal therapy, and 19 had been treated previously with surgery. The yoga and control groups were evenly balanced with respect to various cancer treatments as well as treatments for side effects.
The type of yoga assessed in the study, called Eischens yoga, focuses on holding and maintaining poses, and is accessible for all body types and experience levels. The sessions lasted 75 minutes each. Before, during, and after the nine-week study, men were asked to rate their fatigue, as well as sexual and urinary symptoms.
Men in the yoga group reported improving or stabilizing symptom scores over time, whereas men in the non-yoga group reported worsening symptoms. The authors speculated that yoga improves erectile and urinary function by strengthening core muscles and improving blood flow. They urged men to keep an open mind and to look for a yoga group and instructor with whom they feel comfortable.
To learn more about the latest studies and treatment options for men dealing with prostate issues, read the 2018 Annual Report on Prostate Disease from Harvard Medical School