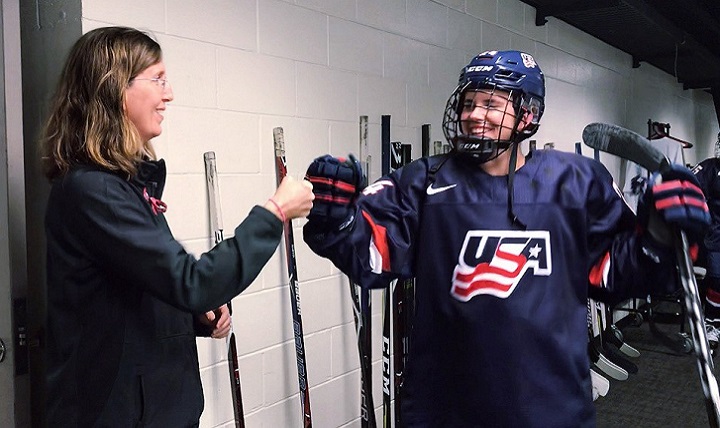 
BETHESDA, Md. — Dreams were realized, records were shattered, and memories were made this month in Pyeongchang, South Korea, by the 244 members of the U.S. Olympic Team who competed in 15 disciplines across seven sports ranging from snowboarding to ice dancing to curling.
But there was another select U.S. team in Pyeongchang, working out of the spotlight and not going for the gold. This team was charged with caring for the blisters, pulled or strained muscles, cold-related and other illnesses, broken bones, and all of the other potential health care needs of our nation’s most elite athletes – and a Uniformed Services University of the Health Sciences sports medicine fellowship alumna was among them.
Dr. Allyson Howe served as the head physician of the U.S. Olympic women’s ice hockey team, which won the goal medal against Canada in this year’s games. This was Howe’s second trip to the Olympics; she supported the 2014 Winter Olympics in Sochi, Russia, where she served as a general physician for U.S. Olympic Committee staff, family members and former Olympians.

Although Howe was the only USU program graduate to provide support to the international athletic competition this year, she’s not alone in her support for the Olympic Games. Retired Army Col. (Dr.) Kevin DeWeber, Army Col. (Dr.) James Lynch, Army Col. (Dr.) David Haight – all alumni of the Primary Care Sports Medicine Fellowship at USU – worked behind the scenes to care for those competing for medals during the 2016 Summer Olympics in Rio de Janeiro. Haight and fellow alum Army Lt. Col. (Dr.) Peter Muench supported the 2014 Sochi games with Howe.
2005 Fellowship
Howe, a former Air Force physician, was selected for the National Capital Consortium's Military Primary Care Sports Medicine Fellowship based at USU in 2005. She went on to teach family and sports medicine in the Air Force at Andrews Air Force Base, Maryland, and later at the Maine Medical Center in Portland, Maine, after leaving the Air Force in 2008. She joined the Air Force Reserve, and later the Air National Guard, retiring with 20 years of combined military service.
Howe also worked as a team physician for American University, the U.S. Naval Academy, the University of Southern Maine, St. Joseph’s College of Maine, and for the Portland Pirates of the American Hockey League. In 2010, Howe started working with Team USA as a team physician for the International Ice Hockey Federation Under-18 Women’s World Championship, and has since worked with the U.S. Women’s National Team. In 2014, she transitioned to her current position as the head team physician for the women’s program.

“I wanted to be a hockey player when I was 10. I tried to get my dad to let me, but it didn’t fit in our family plan,” Howe recently told the Portland Press Herald. Instead, her path ultimately led her to Sochi, and now, South Korea. “This is a very special trip,” said Howe. “It’s a dream come true to work with such dedicated and high quality athletes and people. It’s been quite inspiring to see how the team and staff have prepared every day over the past four years to reach the ultimate goal.”
Disclaimer: Re-published content may have been edited for length and clarity. Read more from the original post.
Publicado por salud equitativa en 9:22