According to a new study published online in the American Thoracic Society's American Journal of Respiratory and Critical Care Medicine, females who frequently use cleaning sprays or other cleaning products at home, or are employed as cleaners are more prone to the risks of deteriorated lung function than women who do not clean. 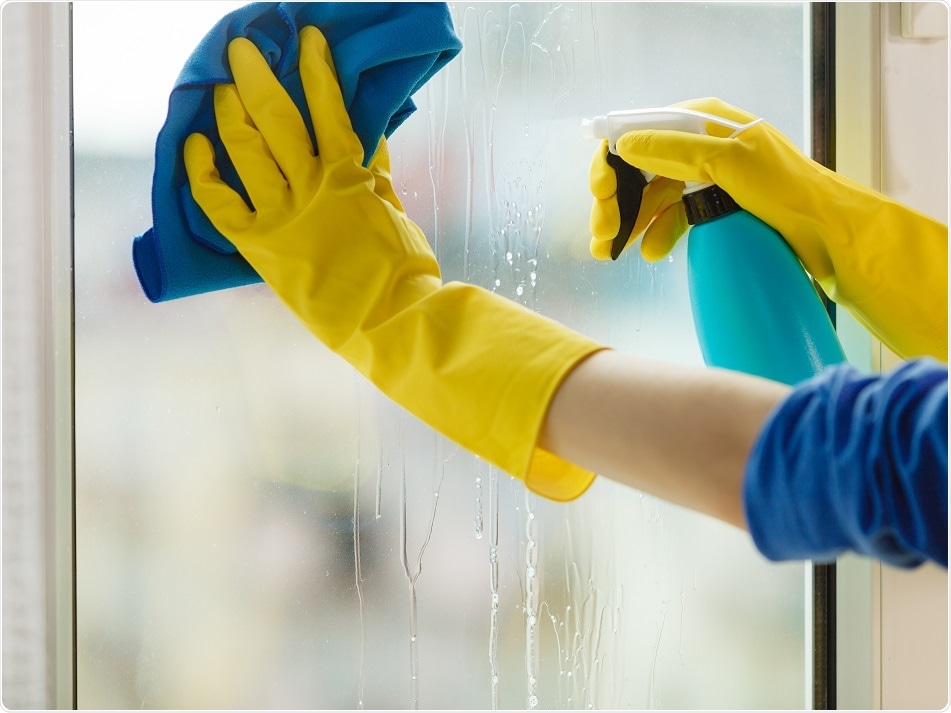 Credit: CI Photos/ Shutterstock.com
In the current study, investigators at the University of Bergen in Norway assessed the data obtained from 6,235 participants in the European Community Respiratory Health Survey. The average age of participants was 34 at the beginning of the study and the participants were followed for about 20 years.

While the short-term effects of cleaning chemicals on asthma are becoming increasingly well documented, we lack knowledge of the long-term impact. We feared that such chemicals, by steadily causing a little damage to the airways day after day, year after year, might accelerate the rate of lung function decline that occurs with age."
Dr. Cecile Svanes, University of Bergen

According to the authors, impaired lung function is caused by the irritation that most cleaning chemicals cause on the mucous membranes lining the airways, which results in persistent changes in the airways and airway remodeling in the long run.
The study did not find that the ratio of FEV1 to FVC deteriorated more rapidly in women who cleaned. The metric is used when diagnosing and monitoring patients with chronic obstructive pulmonary disease, or COPD.
However, the study found that asthma was a more frequent condition among women who cleaned at home (by 12.3%) and at work (by 13.7%), compared to those who did not clean (9.6%). The study also failed to find whether men who cleaned, either at home or at work, suffered a greater decline in FEV1 or FVC than men who did not.
The researchers also considered the factors that might have biased the findings, including body mass index, smoking history, and education.
The drawbacks of the study were that the study population included very few women who did not clean at home or work; the number of men who worked as occupational cleaners was also small, and the cleaning agents to which they were exposed was likely different from that of women working as cleaning professionals.
Oistein Svanes said: "The take home message of this study is that in the long run cleaning chemicals very likely cause rather substantial damage to your lungs. These chemicals are usually unnecessary; microfiber cloths and water are more than enough for most purposes."
He recommended that public health officials regulate cleaning products and encourage manufacturers to produce cleaning agents that cannot be inhaled.
Source:
https://www.eurekalert.org/pub_releases/2018-02/ats-wwc021318.php
Publicado por salud equitativa en 10:38