Editor at BMC
Natalie joined BioMed Central in October 2007 after having completed an MSc in Environmental Health at the Cyprus International Institute in Association with the Harvard School of Public Health. She is the training co-ordinator for the BMC series editorial team and the Editor of BMC Public Health and BMC International Health and Human Rights. 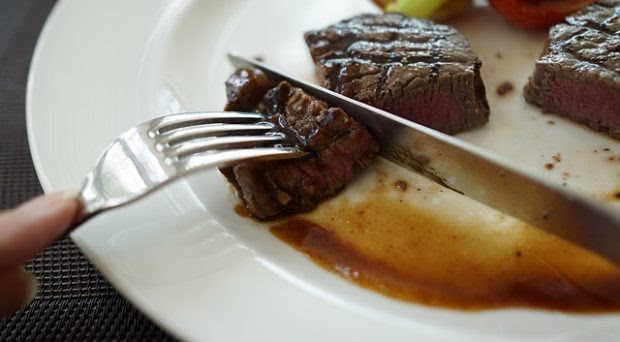 Pixabay
The global food system, from fertilizer manufacture to food storage and packaging, is responsible for up to a staggering one-third of all human-caused GHG emissions. Although there is a need to make food systems more efficient and sustainable, this in itself is not adequate to bring GHG emissions down to acceptable levels; changes also need to be made to our diets.
But what changes are required? Elisabeth Temme and colleagues at The National Institute for Public Health and the Environment (RIVM) set out to answer this question by looking at food consumption in the Netherlands, where the intake of fruits and vegetables is very low and where the intake of saturated fatty acids and sodium is very high.
Consumption data was obtained from the most recent food consumption survey in the Netherlands, the Dutch National Food Consumption Survey (DNFCS) 2007-2010. All consumptions were labelled as one of seven food consumption occasions, distinguishing between the three main meals (breakfast, lunch, dinner) and all moments in between meals (before breakfast, in between breakfast and lunch, in between lunch and dinner, after dinner). Socio-demographic and lifestyle data such as physical activity and educational level was also obtained.
In order to estimate GHG emissions associated with different foods, life cycle assessments were performed; these look at the entire life cycle of a product from primary production, processing, use of packaging and transport to storage as well as the preparation of the food. The GHG emissions associated with the preparation of foods in the consumer phase was based on the average cooking time for each product . Food waste was also included by using food group specific percentages for avoidable and unavoidable food losses throughout the food chain, including the consumer phase.
The researchers found that, in the Dutch diet, the GHG emission varies per consumption occasion. In the highest tertile of dietary GHG emission, dinner was associated with the highest GHG emissions, and consumptions in between meals were associated with the second-to-highest emissions. Meat consumption contributed most to the GHG emission of dinner, while beverages contributed most to the GHG emission of consumptions in between meals. Dairy (including cheese) was an important contributor to total daily dietary GHG emission throughout the day.
The authors also developed various scenarios to lower GHG emissions of people in the highest tertile of dietary GHG emission: 1) reduce red and processed meat consumed during dinner by 50% and 75%, 2) replace 50% and 100% of alcoholic and soft drinks (including fruit and vegetable juice and mineral water) by tap water, 3) replace cheese consumed in between meals by plant-based alternatives and 4) two combinations of these scenarios. Effects on GHG emission as well as nutrient content of the diet were assessed.
The most effective single dietary change was to reduce the consumption of meat, with a 75% reduction in red and/or processed meat during dinner resulting in a 24% reduction in GHG emissions for men and a 22% reduction for women. Furthermore, replacing the consumption of all alcoholic drinks and soft drinks (including mineral water and fruit and vegetable juices) with tap water was also successful in reducing dietary GHG emissions.
The dietary changes are also beneficial for health as they are more in line with dietary guidelines and reduce saturated fatty acids and sugar intake. For those who may not meet energy or iron requirements with these changes in diet, low GHG emission and nutritious replacement foods might be needed.
Although the scenarios in this study were focused on people in the highest tertile of GHG emissions, it is expected that the dietary changes proposed here will also lead to reductions in GHG emissions for people in the lowest or intermediate tertiles. However, further research is required to determine whether this is indeed the case.
Publicado por salud equitativa en 7:06