Bowen’s disease (BD) is neither a genetically transferable disease, nor one caused by direct contact through skin, but can occur anywhere in the body and is usually seen on the lower legs. Red scaly patches, warts, or spots on the epidermis are the general symptoms of this disease. 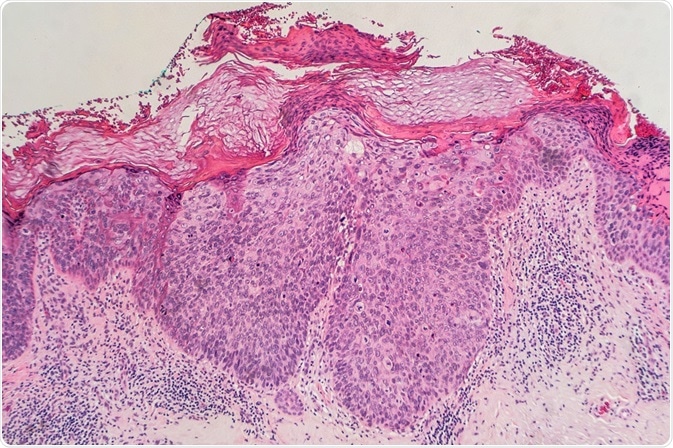 Credit: David Litman/ Shutterstock.com
Often, the skin becomes sore, itchy, and sometimes bleeds and forms scab due to scratches. This disease is precancerous, in which lesions grow visibly on the upper layer of the skin. It does not cause any serious damage to the vascular bundle and endodermis.
The risk of getting Bowen’s disease is greater only when patients have already had exposure to radiotherapy treatment in the affected area. Very less possibilities are there when exposed to arsenic elements, as the lesions are seen over the skin with single or multiple patches.
The patches seem red-brown in color with a mild inflammation. They resemble sclerosis and a thin form of psoriasis, dermatophyte infection, or dermatitis.

Due to intradermal carcinoma,  persistent and non-elevated patched red scaly plaques occur, with a possibly cancerous outcome. These proliferate to atypical squamous cells, which resemble fish scales.
The patched lesions can appear anywhere on mucosal surfaces or on the surface of the skin. In general, arsenic compounds are found to be the component of mild BD occurrence. As a result, the lesions found are single patched in half the BD affected cases.

Signs of BD based on location affected

The effect of SCC in situ varies with the locations. Usually it occurs on skin when exposed directly to sun rays, affecting the scalp, top layer of lips, and back of ears. Possibilities are there to occur anywhere on the body, including inside buccal cavity and in the genital areas. BD presents in the skin as a slow growing, well-demarcated plaque with uneven borders and scaled skin layers or crusted layer.

It affects any age group and is not a gender-specific disease, but very rarely affects those who are below the age of 30. Additionally,, patients are mostly above 60-years old, and it rarely affects the soles or palms. BD affected people are mostly women (around 75–80% cases are women) and about three-fourths are affected with lesions on the lower leg (60–85% cases are due to direct exposure to sunlight).
However, men who are highly exposed to UV rays at work also show BD symptoms. Women are more prone to BD in genital areas, i.e., three times as likely than men. It also frequently affects those who take immunity suppressing drugs.
Though with proper medications and treatment, SCC in situ can be cured, evaluating at every quarter after treatment is needed. Strategies like freezing, cauterization, and diathermy coagulation are highly effective treatments for Bowen's disease being prescribed nowadays. In addition, before any problems persist further, regular checkups and continuous monitoring of patches results in proper healing of the skin.
Reviewed by Afsaneh Khetrapal Bsc (Hons)