By Jeyashree Sundaram, MBA
The human skin, which is made up of multiple cells, is one of the most complex organs in the human body. The various skin cells complement each other by working in coordination and performing effective functions like skin homeostasis; the skin also acts as a barrier for protecting the internal organs from harmful ultraviolet radiation. 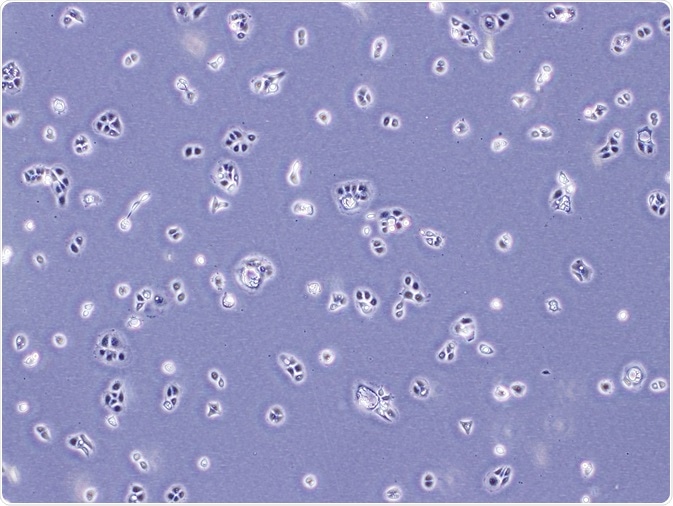 Credit: Chedped Studio/ Shutterstock.com
Each skin cell has functional roles that are carried out in their particular region of existence. The basal cell layer is the innermost layer of the epidermis, comprising the keratinocytes and melanocytes. Keratinocytes play an important role in providing skin structure and in functioning of the immune system. Melanin is a pigment produced by melanocytes, and is responsible for providing the skin color.

Basal cells are small round-shaped cells found in the basal cell layer. Skin cells are first produced in this region by continuous division, giving rise to new skin cells. These new cells continuously force the older cells toward the uppermost layer of the skin, where they are finally shed. The basal layer is otherwise called the stratum germinativum, as the cells produce new cells continuously.
These cells are composed of basophilic cytoplasm and a chromatin-rich nucleus in an elliptical shape. Basal cells contain gap junctions for cell communication, desmosomes for cell-to-cell attachment, hemidesmosomes for connecting with the basal membrane, and an extracellular matrix.

Stem cells of keratinocytes are found in the epidermal basal layer, which is the innermost layer of stratified epithelia. Separation of these cells leads to transient amplifying cells which additionally divide and distinguish as they move toward the epidermal layer.
Keratins are the major proteins identified in keratinocytes. These proteins help in the formation of keratinocytes cytoskeleton, and keratin expression modifies as transient amplifying cells that differentiate and move upward to the stratum corneum, developing as hair and nails. Any defect in keratin expression will result in epidermal diseases that also occur in the nails and hair.

Role of keratinocytes in immune system

Keratinocytes function as immunomodulators and produce inhibitory cytokines when there is no cut or injury, triggering inflammation; finally, in response to injury, the Langerhans cells are activated by keratinocytes. When the skin is infected, Langerhans cells perform like antigen-presenting cells, which are the first cells to act upon microbial antigens that enter into the body from ruptured skin.

Melanocytes are identified at the epidermal–dermal junction of the basement membrane. Melanin pigments which are synthesized provide different skin colors and also protect the skin from ultraviolet radiation. Sunlight exposure makes melanocytes to increase production of melanin, and thereby darken the skin for protection.
Thus, the skin gets a suntan. After synthetization of melanin, they are stored inside the melanosomes and then transferred to the top layer of suprabasal keratinocytes with the help of extended dendrites. Melanin functions as a natural sunscreen for the body.
Melanins are classified as:
The human skin has about 1000—2000 melanocytes per square millimeter. The basal cell layer consists of about 5%–10% of melanocytes cells. Although every person possesses a unique skin color, the melanocyte density is similar in all types of skin. The important components of the basement membrane are collagen VII, collagen type IV, and the laminins.
Existence of the basement membrane is required for alignment of melanocytes, whereas in the event of nonexistence of the basement membrane, the melanocytes cells are moved to the uppermost layer of the keratinocytes and endure spontaneous pigmentation.
Reviewed by Afsaneh Khetrapal Bsc (Hons)