By Liji Thomas, MD
Small intestinal bacterial overgrowth (SIBO) is a condition in which there are an excessive number of bacteria in the small intestine. It is important as the cause of much gastrointestinal symptomatology, albeit non-specific, as well as systemic features, such as nutritional deficiencies, osteoporosis and significant asthenia. Diarrhea and malabsorption are frequently at the root of these complaints. 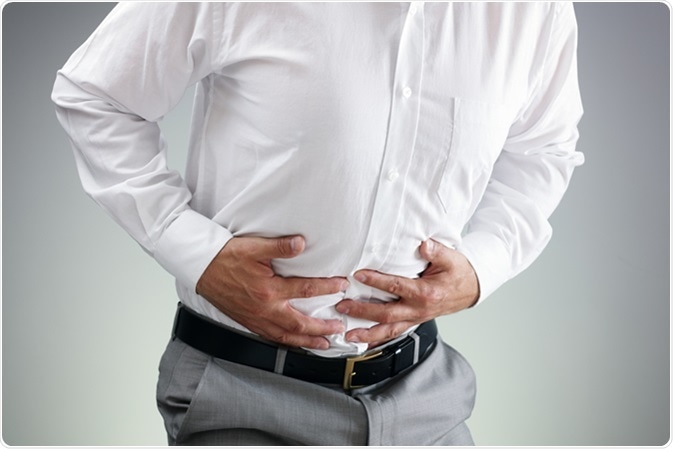 SIBO causes symptoms that are common to many gastrointestinal disorders. These include:
The classical picture of SIBO comprises steatorrhea, abdominal bloating, and weight loss. However, this is rarely the case, and therefore most diagnoses are based on the overall clinical findings.
The severity and frequency of these symptoms are likely to be related to the intensity of bacterial overgrowth and resulting mucosal inflammation.

In a few very severe cases the vitamin A deficiency may cause night blindness, while that of vitamin D may result in osteomalacia or tetany.
The former presents with a softening of the bones, while the latter has muscle spasms that occur intermittently.
Vitamin K reduction may prolong bleeding times. However, this is very rare as the vitamin K level is rarely reduced, because it is synthesized by luminal bacteria.
In prolonged multi-nutrient deficiency, neuropathies, retinopathies, and T-cell defects are observed. Iron deficiency can also occur, which may result in macrocytic or microcytic anemia. This may account for pallor and fatigability in patients with SIBO.

Malabsorption of carbohydrates can result from sugars being digested in the gut lumen by bacteria, along with secondary disaccharidase deficiency, because of damage to the brush border. Protein malabsorption also occurs due to consumption by bacteria, but in some cases, flattening of the brush border leads to protein-losing enteropathy.
Atrophic gastritis may be a risk factor in precipitating cobalamin deficiency, which can lead to severe polyneuropathies, because of competitive absorption of cobalamin by bacteria in the upper intestine.

The nonspecific nature of most signs and symptoms means that many alternative diagnoses have to be kept in mind, and testing is typically required to make a diagnosis with confidence. Many physicians resort to prescribing antibiotics on an empirical basis in these patients, but this may often be counterproductive. For one thing, a response could be due to a reduction in pathogenic colonic flora as well as overgrown small intestinal bacteria. Secondly, the lack of response does not rule out the diagnosis, but may give rise to adverse effects without any benefit. The widespread use of antibiotics for such nonspecific findings may cause unnecessary antibiotic resistance to emerge, as well as predisposing to Clostridium difficile colitis. Thus, empirical antibiotic therapy is not an ideal test for SIBO despite hitting the jackpot, figuratively speaking, in a few cases.
Reviewed by Jonas Wilson, Ing. Med.