By Liji Thomas, MD
Small intestinal bacterial overgrowth (SIBO) is a pathological overgrowth of gut bacteria upwards or rather in a retrograde fashion, into the upper gastrointestinal tract. This has many consequences, which reflect upon both intestinal and extraintestinal homeostasis. 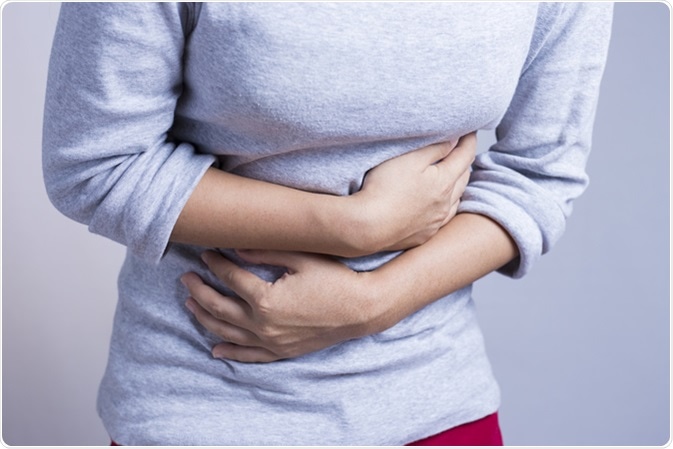 The occurrence of SIBO shows that normal regulatory mechanisms that keep bacterial populations in the small and large intestines have been disturbed in some way.
The most common ways in which this happens seems to be hypchlorhydria and dysmotility of the small bowel. However, some other risk factors are known, including anatomic abnormalities of the small or large intestine, and disrupted gut immune function.
Once bacteria from the colon grow into the small intestine and colonize it, this may result in mucosal inflammation usually on a microscopic scale. This in turn leads to atrophy of the intestinal villi, with infiltration by lymphocytes.
Under normal health conditions, the high acidity of the stomach ensures a more or less zero bacterial count in the stomach, and prevents significant bacterial growth in the upper small intestine, all the way until the terminal ileum. This is despite the fact that significant amounts of bacteria enter with each swallow from the oropharynx.
The second powerful force is the propulsive force of the smooth muscle in the small intestine wall, especially the migrating motor complexes, which shift food downward in a series of contractions. By physically moving bacteria onward with the food stream, it makes it impossible for most of them to colonize this part of the gut.
Other ways in which the normal small intestine acts to prevent bacterial growth is:

Once colonic bacteria overgrow in the proximal small bowel, fermentable carbohydrates are acted upon by proliferating coliforms or oral bacteria to form excessive gas in the intestine. This in turn causes the typical symptoms such as bloating, flatulence, abdominal cramps and altered bowel movements. This is actually a type of dysbiosis.

The severity and frequency of the symptoms in SIBO are linked to the presence of large numbers of bacteria as well as related complications. Of these, the most important are mucosal inflammation. Inflammation of the mucosa of the small bowel leads to loss of the brush border, which in turn reduces the absorptive area in the small intestine.

Bacterial deconjugation of bile acids is another important feature in SIBO. This leads to the formation of free bile acids, which further damage the intestinal lumen and also reduce micelle formation, being absorbed in the jejunum rather than the ileum. Lack of micellar formation causes fat malabsorption, accompanied by the resulting lack of fat-soluble nutrients such as vitamins A, D and E. This leads to vitamin deficiencies including neuropathy due to low levels of cobalamin.

Malabsorption due to mucosal inflammation also causes more fermentable carbohydrates to pass down into the large bowel with a rise in gas production. Patients with SIBO often have a relative deficiency of disaccharidases as the brush border is damaged. This reduces the absorption of lactulose, sucrose and sorbitol in the small intestine.

The presence of excessive lactulose and other simple sugars as substrates for fermentation, produce short-chain fatty acids that are crucial for colonic health, but toxic to the small bowel. These fatty acids inhibit proper absorption; it slows down jejunal movements via the secretion of peptide YY, and other peptides. This dysmotility is exacerbated by metabolites of Gram-negative bacteria, lipopolysaccharides, endotoxins and ethanol, besides certain neurotransmitters.
Ammonia overproduction occurs as the intraluminal proteins are also digested. Other toxic compounds induce mucosal inflammation and worsen small intestinal mucosal permeability.
Finally, SIBO is more toxic in patients programmed to produce less IL-1 receptor antagonist genes, but higher proinflammatory cytokines, such as IL-6 or tumor necrosis factor-alpha.
Reviewed by Jonas Wilson, Ing. Med.