Usutu virus (USUV) is an emerging mosquitoborne flavivirus with an increasing number of reports from several countries in Europe, where USUV infection has caused high avian mortality rates. However, 20 years after the first observed outbreak of USUV in Europe, there is still no reliable assessment of the large-scale impact of USUV outbreaks on bird populations. In this study, we identified the areas suitable for USUV circulation in Germany and analyzed the effects of USUV on breeding bird populations. We calculated the USUV-associated additional decline of common blackbird (Turdus merula) populations as 15.7% inside USUV-suitable areas but found no significant effect for the other 14 common bird species investigated. Our results show that the emergence of USUV is a further threat for birds in Europe and that the large-scale impact on population levels, at least for common blackbirds, must be considered.
Usutu virus (USUV) is a mosquito-borne flavivirus that, together with West Nile virus (WNV), belongs to the Japanese encephalitis antigenic complex (1). Both viruses share a similar enzootic transmission cycle, with birds as amplifying hosts and ornithophilic mosquitoes as vectors (2). Mammals, including bats, horses, and humans, are considered incidental or dead-end hosts (3–6).
The clinical picture of human USUV infection includes fever, rash, jaundice, headache, nuchal rigidity, hand tremor, and hyperreflexia (7). It has been generally assumed that the incidence of human USUV infections is very low compared with the incidence of WNV infections. However, this assumption is probably strongly biased by the comparatively low capacity to correctly identify USUV infection in humans (2,8). Recent data from Italy indicate that human USUV infections may not be a sporadic event and can even be more frequent than WNV infections in areas where both viruses co-circulate (9).
The most common recent ancestor of the USUV strains circulating in Europe emerged in Africa at least 500 years ago (10). In 1996, the first recognized USUV outbreak outside Africa caused a massive die-off among common blackbirds (Turdus merula) in the Tuscany region of Italy (11). During the next 2 decades, USUV was observed in several countries in Europe as responsible for periodic small epizootic outbreaks affecting birds (2,12). In Germany, the earliest observation of USUV was in 2010 in mosquitoes (13) and resulted in mass deaths of common blackbirds (12,14) and at least 2 human USUV infections (4,6).
Mosquitoborne pathogens such as WNV (15) or avian malaria (16) could have substantial negative effects on bird populations, such as the size of affected populations (15) or composition of species communities (16). Several bird taxa of different taxonomic orders were found to be susceptible to USUV infections (2); during the USUV outbreaks in Europe, common blackbirds accounted for the largest proportion of observed dead birds (2). The effect of USUV on the populations of this species is discussed in different studies, which gave different estimates for population declines. Savini et al. (17) estimated l,000 deaths for blackbirds in Veneto, Italy, in 2008–2009. During the USUV outbreak in Vienna, Austria, and surrounding areas in 2003–2005, Steiner and Holzer (18) observed a population decline of ≈90%. Furthermore, Rubel et al. (19) estimated that only 0.2% of all dead blackbirds were detected by the national USUV monitoring program in Austria (20), and therefore, ≈50,000 birds died during the outbreak. Using the same method of estimation, ≈40,000 common blackbirds died in the earliest known outbreak (2011–2012) in Germany (21). Further studies in Germany estimated 220,000–420,000 dead common blackbirds (22) and a local population reduction of >50% (23).
The existing studies lack 2 conditions: an explicit spatial distinction between areas in which USUV circulates and those in which it does not; and the analysis of long-term bird population data, which are necessary to test the hypotheses that USUV caused substantial population declines in birds. Therefore, 20 years after the first observed outbreak of USUV in Europe (11), a reliable assessment of the large-scale impact of USUV outbreaks on bird populations is missing. Identifying the population-level effects of the disease is challenging, because they must be distinguished from natural population fluctuations driven by environmental factors such as climate (15) or land use change (24). Thus, the analyses require long-term bird abundance data that extend before and after the emergence of the disease and that cover areas with and without circulation of the pathogen. Hence, the aims of this study were the identification of areas suitable for USUV circulation in Germany using a distribution modeling approach based on dead bird surveillance data and the comparative analysis of USUV effects on the breeding bird populations in USUV-suitable areas.

The USUV data in Germany were collected as part of a dead bird surveillance program (12,14,25,26). After the description of a USUV outbreak in wild birds in Germany in 2011, we requested, by press releases and media dissemination, that citizens send dead birds for USUV screening at national reference laboratories. We necropsied the bird specimens and screened them for USUV-specific RNA. During August 2011–November 2015, a total of 230 specimens of 15 species (85.7% common blackbirds) from 132 different sites tested positive for USUV. We used European Land Surface Temperature (EuroLST) dataset maps with 9 bioclimatic variables at 250-m resolution as explanatory variables for the distribution modeling of USUV (27). Bioclimatic variables are derived from monthly temperature and rainfall values. These biologically meaningful variables represent annual trends, seasonality, and extreme or limiting environmental factors.

We applied an ensemble boosted regression tree (BRT) approach using R software (https://www.r-project.org) with the packages raster, dismo, and ecospat and visualized with ggplot2, which was successfully applied to other mosquitoborne viruses in the past (e.g., Zika virus) (28). We calibrated BRT models with presence-only data and 10,000 random background points selected from the entire area of Germany. To account for the biased bird collection due to the unsystematic dead bird surveillance program and to increase the robustness of model predictions and quantify model uncertainty, we selected 300 random subsamples of the presence data with replacement. Due to locality uncertainties in the presence data (e.g., mobility of the birds and imprecise reporting by the volunteer senders), we applied a random point selection within the corresponding German postal code areas (0.31–891.68 km2, mean size 32.00 km2) for all presence points (i.e., sites with birds testing positive for USUV) in each subsample. In addition, we selected a new set of 10,000 random background points for each model. We weighted background points and occurrence points equally in each of the 300 BRT models, which we averaged for the final USUV distribution map. We converted the continuous distribution map for USUV to a binary map with areas that are suitable or unsuitable for USUV. Following Pigott et al. (29), we selected a threshold that included 90% of the USUV occurrence points. We chose a threshold cutoff of 90% instead of 100% to account for potential spatial inaccuracies of the occurrence point dataset.
We validated the models with a 10-fold cross-validation approach. We produced a total of 300 random split sampling datasets with 10 subsets for training datasets (comprising 10% of the presence and background observations) and 10 subsets for test datasets (comprising 90% of the presence and background observations) each. We used the training datasets to assess the ability of the models to predict the test dataset with the area under the curve (AUC) statistic. We averaged the AUC values of the models across the 10 models of each split sampling dataset and finally across the 300 average AUC values. Furthermore, we applied a pairwise distance sampling procedure to avoid AUC inflation due to spatial sorting bias, which is considered to give a more realistic quantification of the model performance especially regarding its transferability (30).

We applied a generalized additive model approach to analyze the population development of each of the 15 bird species. This statistical approach was first developed by Fewster et al. (31) to describe population trends in breeding birds and later successfully used to model bird and bat populations (32,33). We used the GAM framework to fit a single smoothed curve to the trend of the number of bird specimens in the USUV-positive areas and USUV-negative areas per year. In addition, to allow for differences in relative abundances between sites, we included a site term in the models. Following the suggestion by Fewster et al. (31), we set the selection of the degree of smoothing in the GAM to 0.3 times the number of years of the survey data (df = 3).
We avoided the problems of temporal autocorrelation within the abundance data (31) and overdispersion (34) by using a bootstrap approach. We produced CIs around the smoothed trends with a total of 300 bootstrap samples by resampling with replacement observations from the original dataset for each bird species. We classified each sampling site of the bird population data to be located in the USUV-positive or USUV-negative area on the basis of site coordinates and the USUV binary map. Spatial information of the bird observation sites was available only at the level of postal code regions; therefore, for each bootstrap sample, we took the mean of observed specimens per species within each region and then randomly assigned it within its postal code region to classify it as within the USUV-suitable or USUV-unsuitable area.
We set 2011 as the baseline year (index = 100); this year was the last time bird abundance data were collected before the first epizootic outbreak of USUV in Germany (14). Nonoverlapping 95% bootstrap CIs with index = 100 and nonoverlapping 95% bootstrap CIs between the USUV-suitable areas and USUV-unsuitable areas in 2016 were interpreted as a statistically significant difference (p<0.05). 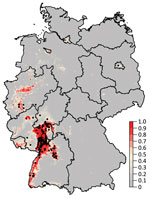 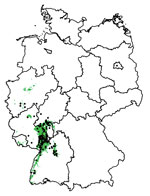 Figure 2. Areas suitable (green) and unsuitable (white) for Usutu virus (USUV) in Germany derived from 300 boosted regression tree models. Black dots denote sites with dead birds detected positive for USUV.
The mean of the ensemble of 300 BRTs indicated the highest probability for USUV circulation in southwestern Germany (Figures 1,2; Technical Appendix[PDF - 556 KB - 3 pages] Figure 1). Environmentally suitable areas extended from southwestern Germany at the border with France along the valley of the Upper Rhine toward western Germany. The area represented 9,510 km2 of the country (2.7%). The EuroLST bioclimatic variable with the strongest influence on USUV risk was the annual mean temperature, contributing 71.4% to the variation in the ensemble of models. The next most influential variables were mean temperature of the coldest quarter of the year (8.9%), temperature seasonality (7.2%), and minimum temperature of the coldest month (5.2%). The other 5 variables had <5.0% effect each on USUV risk: mean temperature of the warmest quarter (2.8%), mean diurnal range (1.6%), temperature annual range (1.3%), maximum temperature of the warmest month (1.2%), and isothermality (0.4%) (Technical Appendix[PDF - 556 KB - 3 pages] Figure 2). With an AUC value of 0.89 (±0.08 SD), 10-fold cross-validation indicated high predictive power of the BRT ensemble map.

We thank Heike Baum and Alexandra Bialonski for assistance in the laboratory work.
This work was financially supported by the German Federal Ministry of Food and Agriculture (BMEL) through the Federal Office for Agriculture and Food (BLE), grant no. 2819104315.