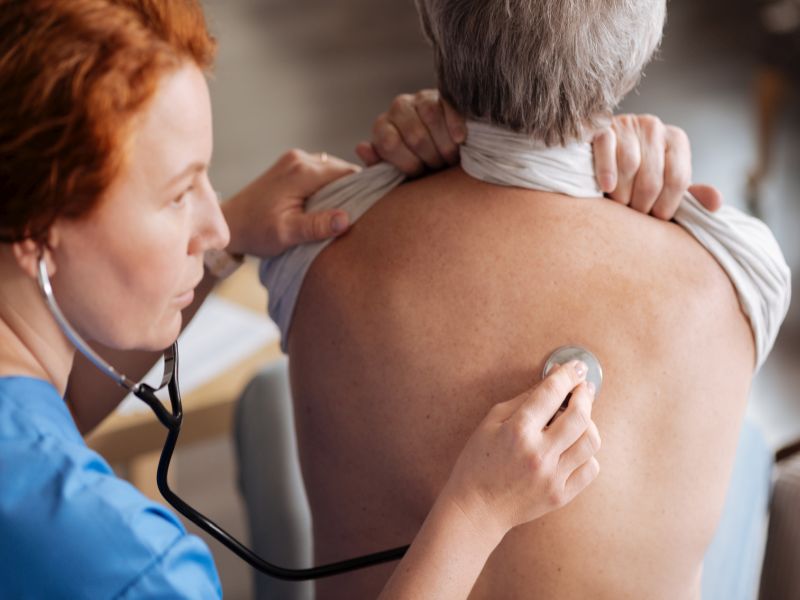 FRIDAY, Sept. 29, 2017 (HealthDay News) -- The number of Americans who die from chronic respiratory diseases has skyrocketed over the past 35 years, led in large part by deaths from COPD, a new report indicates.
From 1980 through 2014, more than 4.6 million Americans died from a range of chronic respiratory illnesses, the researchers reported. While the risk was pegged at 41 deaths for every 100,000 people back in 1980, it rose to nearly 53 out of every 100,000 by 2014, representing a nearly 31 percent spike over 35 years.
And the dismal news continued in the new report.
Eighty-five percent of the deaths -- 3.9 million people -- were from chronic obstructive pulmonary disease (COPD), which moved up in that period of time to become the third leading cause of death, ahead of stroke, in the United States.
Other chronic respiratory illnesses that saw dramatic increases included: particle-inhalation diseases, such as pneumoconiosis and interstitial lung disease; asthma; and pulmonary sarcoidosis (a disease of inflammation and abnormal mass growth).
Lead investigator Laura Dwyer-Lindgren could not pinpoint the reasons for the dramatic rise, but noted, "both mortality rates, and changes in mortality rates over time, differed considerably among counties for all different types of chronic respiratory diseases."
Dwyer-Lindgren is a researcher with the University of Washington's Institute for Health Metrics and Evaluation.
The study team noted that, as of 2015, nearly 7 percent of all deaths in the United States are due to chronic respiratory illness.
To track risk trends by counties, the investigators analyzed death records and population figures that had been collected by the U.S. National Center for Health Statistics, the U.S. Census Bureau, and the Human Mortality Database.
Residents of central Appalachia were found to face the highest risk of death from COPD and pneumoconiosis. Interstitial lung disease-related death risk was highest across the Southwest, northern Great Plains, New England and South Atlantic. Asthma posed the biggest risk in Georgia, South Carolina, and across the southern half of the Mississippi River. And death risk from all other chronic respiratory illnesses was greatest in the South, across states from Mississippi to South Carolina.
But not all the news was bad.
The mortality rate for the respiratory illnesses actually peaked at more than 55 out of 100,000 in 2002, and then declined to nearly 53 by 2014. Dwyer-Lindgren said that may be due to the relatively recent -- and ongoing -- drop in smoking rates.
"Tobacco smoking is a major contributor to chronic respiratory disease mortality," she said. "But there is often a substantial lag between initiating smoking and experiencing negative health outcomes, so the increase and peak in smoking prevalence that occurred decades ago were reflected in the increase and peak in chronic respiratory disease mortality more recently," Dwyer-Lindgren explained.
"Continued efforts to reduce smoking by preventing initiation and promoting cessation are important to continue this trend," she added. "This is particularly true in regions where smoking prevalence remains high."
Dwyer-Lindgren and her colleagues reported their findings Sept. 26 in the Journal of the American Medical Association.
Dr. David Mannino, co-author of an editorial accompanying the report in the journal, suggested that the current risk trend likely "reflects a number of factors, including historical and current smoking patterns, poverty, dietary factors, occupational exposures and other potential factors."
But, he added, "I think the good news is that, over the last 30 years or so, we have made great advances in understanding, preventing and treating chronic respiratory diseases. We have had some great successes. But [we] still have challenges that remain, and will need to be addressed going forward."
Mannino is director of the pulmonary epidemiology research laboratory with the department of preventive medicine and environmental health at the University of Kentucky College of Public Health.
SOURCES: Laura Dwyer-Lindgren, MPH, researcher, Institute for Health Metrics and Evaluation, University of Washington, Seattle; David M. Mannino, M.D., director, pulmonary epidemiology research laboratory, department of preventive medicine and environmental health, University of Kentucky College of Public Health, Lexington, Ky.; Sept. 26, 2017, Journal of the American Medical Association
HealthDay
Copyright (c) 2017 HealthDay. All rights reserved.
News stories are written and provided by HealthDay and do not reflect federal policy, the views of MedlinePlus, the National Library of Medicine, the National Institutes of Health, or the U.S. Department of Health and Human Services.