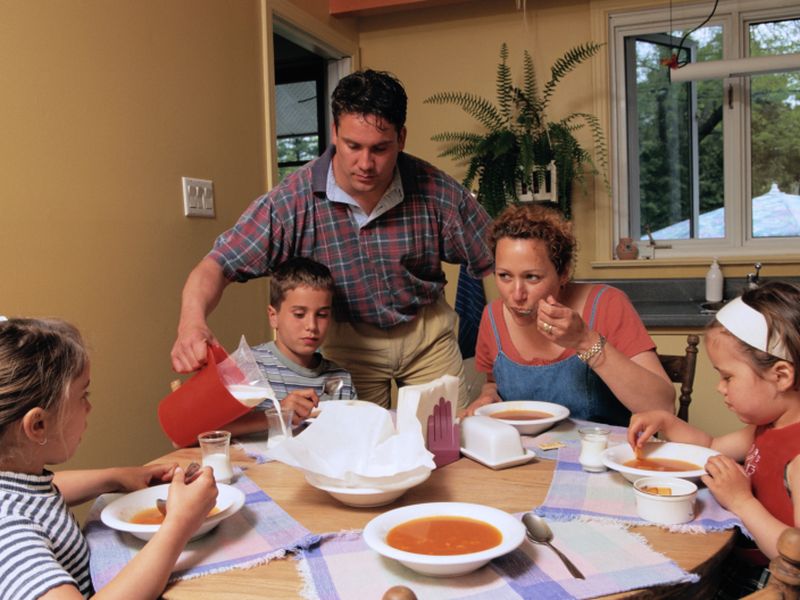 THURSDAY, Oct. 12, 2017 (HealthDay News) -- Parents who struggle to get their children to follow a healthy diet may want to make dinnertime a pleasant experience, new research suggests.
The study found a happier emotional atmosphere during meals allows preschoolers to make healthier food choices.
"Having more positive mealtimes, where people are enjoying themselves, where there's mutual warmth and engagement, makes it a little bit easier for children to approach healthy foods," said lead author Jaclyn Saltzman, a doctoral candidate in the department of human development and family studies at the University of Illinois.
And that's especially important in young kids, she noted.
"The eating behaviors you have early in childhood can track later on," Saltzman said in a university news release.
"Preschoolers are unique because they are on solid foods with a diet similar to adults, but their food choices are still mostly under the control of their parents. We really want to see what effect parents are having, and this gives us that window of opportunity to see that," she added.
For the study, 74 parents of preschoolers between 3 and 5 years old answered two questionnaires about mealtimes over the course of about two years.
During this time, researchers conducted a home visit to observe the family during mealtime. They tracked the positive and negative emotions expressed by both the mothers and their children.
After watching how mothers and their kids interacted, the researchers found that a more pleasant or happy meal had a positive effect on what the children consumed.
Overall, children ate, on average, about one serving more of fruit, vegetables or a soy-protein product during more positive mealtimes, the study revealed.
"When you have a negative family mealtime, you don't want to sit there and try a new thing, enjoy a new texture, or cajole your child into trying something new. You just want to get through it," Saltzman explained.
"We were happy to see that families who are more positive at their mealtimes have kids who seem to be eating a little more healthy food," she said.
The researchers also considered how to help parents, who may not always be feeling very happy, create a more positive mood during mealtimes.
They found that including children in grocery shopping as well as meal planning and preparation help generate more positive emotions during meals.
"First of all, I wouldn't tell parents to just be more positive, to just slap a smile on your face, because in the face of a picky-eating preschooler or any other mealtime challenge, that's just not going to work," Saltzman said. "But there are several things parents can do."
Here are her suggestions:
The study was published in the Journal of Pediatric Psychology.
SOURCE: University of Illinois, news release, Oct. 4, 2017
HealthDay
Copyright (c) 2017 HealthDay. All rights reserved.
News stories are written and provided by HealthDay and do not reflect federal policy, the views of MedlinePlus, the National Library of Medicine, the National Institutes of Health, or the U.S. Department of Health and Human Services.