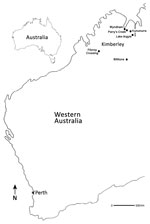 Nucleotide sequences for the complete polyproteins representing 44 mosquitoborne and tickborne flaviviruses, as well as those that are insect specific or have no known vector, were retrieved from GenBank. Alignments with FRV were performed by using MUSCLE in Geneious version 7.1.5, and a maximum-likelihood phylogenetic tree was constructed by using the general time reversible plus gamma distribution site model of nucleotide substitution with 500 bootstrap replicates (MEGA version 7.0.16) (17). Tamana bat virus was used as the outgroup. For alignments of cleavage recognition sequences from members of the YFV group, previously established sites were identified and aligned (18,19). To assess whether FRV was a recombinant virus, we analyzed polyprotein sequence alignments (as described above) by using default parameters for RDP, GENECONV, BootScan, MaxChi, Chimaera, SisScan, 3SEQ, and Phylpro methods available in the RDP4 program suite (20).

Virus replication was assessed in mosquito (C6/36), mammalian (Vero and BSR), and avian (DF-1) cells (21) by using a multiplicity of infection of 0.1 in 2% fetal bovine serum in M199 (C6/36 cells) or DMEM (Vero, BSR, and DF-1 cells). After 1 hour of incubation at 28°C (C6/36 cells) or 37°C (Vero, BSR, and DF-1 cells), the inoculum was removed and monolayers were washed before addition of 1 mL of media. Plates were incubated; monolayers examined for cytopathic effect (CPE); and samples removed in triplicate at 0, 1, 2, 3, 4, and 7 days postinoculation (dpi) and stored at −80°C. The 50% tissue culture infectious dose in each sample was determined by serial dilutions and titration in BSR cells in 96-well tissue culture plates, and titers were calculated (22).

Determination of Virulence in Mice

All procedures using animals were approved by The University of Queensland Animal Ethics Committee. Groups of 10 mice (18–19 day weanling CD1 mice, equal numbers of each sex) were challenged by intraperitoneal injection of 50 μL or intracranial injection of 20 μL of either 100 or 1,000 50% tissue culture dose infectious units (IU) of FRV. Groups of 3 mice were mock challenged intraperitoneally or intracranially. Veterinarians monitored the mice twice daily for 19 days and then daily through 21 dpi (23,24). At 21 dpi, all mice were deeply anesthetized, bled by cardiac puncture, and killed by cervical dislocation. No animals required euthanasia during the experiment. FRV-specific antibodies were detected by fixed-cell ELISA (25), and the brains of mice with mild clinical signs were fixed in 10% neutral-buffered formaldehyde and processed for histopathologic and immunohistochemical examination (23,24).

Human serologic studies were performed with approval from The University of Western Australia Human Ethics Committee. We used human serum samples that were submitted to PathWest Laboratory Medicine WA (Nedlands, Western Australia, Australia) for arbovirus serologic testing and that were positive by flavivirus hemagglutination inhibition assay. We also used serum samples that were submitted for alphavirus testing only (RRV and BFV) and that were serologically negative. Deidentified information about patient age, sex, ZIP code, and test results were provided. Samples from residents of regions in northern Western Australia where FRV had been detected in mosquitoes or where Aedes normanensis mosquitoes are abundant were targeted for this survey. Samples were tested in a flavivirus epitope blocking ELISA that used mAb 3H6 (26). Serum containing flavivirus antibodies in ELISA were subsequently tested by serum cross-neutralization assay for antibodies to FRV, MVEV, KUNV, Alfuy virus, KOKV, Stratford virus, and EHV as described previously (27). As controls, we used polyclonal rabbit or mouse serum previously raised to these viruses.
Animal serologic studies were approved by The Charles Darwin University Animal Ethics Committee. Animal serum (sentinel cattle, horses, chickens, and wallabies) from the Northern Territory of Australia was tested for antibodies to FRV by neutralization tests (28) without prior testing by flavivirus epitope blocking ELISA. Cross-neutralizations with SEPV were conducted on a subset of positive samples to confirm antibody specificity.

We saw little or no visual evidence of infection of C6/36 cell monolayers during the isolation of FRV, and it grew slowly in Vero cells. Cytopathic evidence of infection was most marked in PSEK and BSR cells. Isolates were initially typed by their mAb binding profile against a panel of flavivirus- and alphavirus-reactive mAbs in fixed-cell ELISA. All isolates of FRV reacted with the flavivirus-reactive mAb 4G2 but failed to react with other flavivirus- and alphavirus-reactive mAbs (data not shown). Preliminary analyses of the nucleotide sequence of the NS5–3′ UTR showed 75%–80% identity to SEPV and WESSV, the viruses most closely related to YFV (15,19,29,30). Identity between all FRV isolates in the NS5–3′ UTR was 98.9%–100%. The mAb binding profile differed from EHV and SEPV, and positive reactions to FRV were detected with mAbs 4G2 and 4G4 only (Table 1).

Unbiased high-throughput sequencing results provided >99% of the FRV genome with only partial UTRs not obtained. The completed full-genome length of FRV was 10,807 nt with a single 10,218-nt open reading frame flanked by a 117-nt 5′ UTR and a 472-nt 3′ UTR (Table 2; Technical Appendix[PDF - 381 KB - 4 pages]Figure, panel A) and has been deposited in GenBank under accession no. KM 361634. At the amino acid level, FRV was more similar to SEPV than to WESSV in most regions, with the exception of the short 2k peptide (70% vs. 91% aa homology), NS4a (87% vs. 92% aa homology), and NS5 (88% vs. 89% aa homology). Because there was a sharp change in amino acid homology between FRV and SEPV across the 2k peptide (70%) and NS4b (94%), we assessed aligned polyprotein sequences for recombination breakpoints by using 8 algorithms in the RDP4 suite, but we found no evidence suggesting that recombination had occurred (data not shown).
FRV was highly similar to SEPV across the structural viral proteins, including the membrane (96%) and envelope (96%) proteins. Over the full genome, FRV displayed the highest nucleotide identity to SEPV (79%), WESSV (77%), and YFV (62%). These lower nucleotide identities are in contrast to the polyprotein amino acid homologies (SEPV 91%, WESSV 89%, YFV 61%), indicating that a large proportion of nucleotide differences between FRV and SEPV or WESSV were synonymous. The level of nucleotide identity was higher in the 5′ and 3′ UTRs (94% and 86%, respectively) than in structural proteins (up to 81%) for FRV and SEPV, reflecting the functional importance of the UTRs for virus replication. Closer analysis of several conserved features of flavivirus UTRs is shown in the Technical Appendix[PDF - 381 KB - 4 pages]Figure. Although comparisons of the cyclization sequences (Technical Appendix[PDF - 381 KB - 4 pages]Figure, panel C) indicate a high level of conservation among all members of the YFV group, alignments of the upstream AUG region (Technical Appendix[PDF - 381 KB - 4 pages] Figure, panel D) highlight a clear separation of FRV, SEPV, and WESSV from YFV. When we assessed the string of tandem repeats in the 3′ UTR, some differences between FRV, SEPV, and WESSV emerged. We identified 3 highly conserved repeats in the 3′ UTR of FRV (RFR1, RFR2, and RFR3; Technical Appendix[PDF - 381 KB - 4 pages] Figure, panel B), which are most similar to the previously described sequences identified in YFV (RYF1, RYF2, and RYF3). Strikingly, WESSV (69.7%–90.6%) and FRV (72.7%–90.6%) retained homologous sequences to RYF1, RYF2, and RYF3, and SEPV retained only a vestigial repeat sequence (RSEP3) that is highly divergent from all other members of the YFV group, including FRV.

Mosquitoes yielding isolates of FRV were collected at Fitzroy Crossing in the West Kimberley region in 2011 (Table 3); FRV was isolated from 2 pools of Ae. normanensis and 1 pool of Anopheles amictus mosquitoes. In 2012, a similar level of sampling in the same geographic area (data not shown) showed a shift of activity away from Fitzroy Crossing to a broader area in the eastern and southern Kimberley region, encompassing Billiluna, Kununurra, and Wyndham (Table 3). Sixteen isolates were obtained, most (81.2%) from Ae. normanensismosquitoes (Table 3) and all from female mosquitoes. Additional virus was isolated from An. amictus, Culex annulirostris, and a pool of damaged and unidentifiable Aedes spp. mosquitoes. The minimum infection rate was greatest at Billiluna (2.5 FRV-infected mosquitoes/1,000 mosquitoes; Table 4). Other arboviruses detected during these seasons included MVEV, KUNV, KOKV, RRV, and Sindbis virus (Table 3).

FRV replicated in all 4 cell lines tested. At all time points, the FRV titer grew higher in BSR than in other cell lines, with the exception of Vero cells on day 7; the difference was usually significant (Table 5). Mild CPE was not apparent until day 4 in BSR cells and day 7 in Vero and DF-1 cells; no CPE was evident in C6/36 cells.

Figure 3. Photomicrographs of Fitzroy River virus (FRV)–induced meningoencephalitis in weanling mice inoculated with 1,000 infectious units of FRV. Panels show multifocal mild to severe perivascular and neuropil infiltration of lymphocytes and monocytes...
For the 3 mice in which subtle clinical signs developed, we processed the heads for histopathology. We found histopathologic signs of meningoencephalitis in all 3 (Figure 3, panels A–D). The lesions were most notable in the 1,000 IU intracerebrally inoculated group, corroborating the mild clinical signs observed. The least severe lesions were seen in the mouse from the 100 IU intracerebrally inoculated group; however, the lesions were unilateral in the hemisphere not inoculated. In the other 2 mice, the trend was toward greater severity in the inoculated hemisphere; however, in the other hemisphere and distant from the inoculation site, we found leukocyte infiltration, gliosis, and neuronal degeneration. No viral antigen was detected in the affected brains by immunohistochemistry, suggesting that FRV was cleared at the time of euthanasia (21 dpi).

Antibodies in Humans and Animals

A total of 366 serum samples from humans from northern Western Australia, submitted to PathWest Laboratory Medicine WA for alphavirus or flavivirus serologic testing from March through May in 2014 and 2015, were tested for antibodies to FRV (Technical Appendix[PDF - 381 KB - 4 pages] Table). Overall, the prevalence of antibodies to flaviviruses in the ELISA was 33.6%, of which initial screening showed an FRV neutralization titer >10 in 9 samples. For 3 of these samples, cross-neutralization titers showed FRV antibody titers >40 and at least a 4-fold difference between antibody titer to FRV and other flaviviruses from Australia (Table 6), yielding an FRV positivity rate of 0.8% (3/336) of all samples tested and 2.4% (3/123) of samples with evidence of a flavivirus infection by ELISA. All 3 FRV antibody–positive samples were from the West Kimberley (Broome) region.
Serum from 227 sentinel cattle, 87 horses, and 178 sentinel chickens from the Northern Territory sampled from 2009/10 through 2014/15 were tested for antibodies to FRV. Neutralizing antibodies to FRV were detected in horses (12.6%) and cattle (6.6%). FRV and SEPV cross-neutralization tests on a subsample of FRV antibody–positive serum samples indicated that the FRV infections were not the result of serologic cross-infection with closely related SEPV (data not shown), which occurs in neighboring Papua New Guinea. One sentinel chicken had a low FRV antibody titer. Most FRV infections in domestic animals (n = 24; 77%) were from 2012/13. We also tested serum from 25 wallabies, 1 wallaroo, and 1 bandicoot from the Northern Territory, collected from 2006/07 through 2013/14. Low levels of FRV antibodies were found in 1 wallaby from the Darwin region in January 2007. We found no association between infection and clinical disease in any cattle, horses, chickens, or marsupials tested.

We thank Michael Lindsay, Peter Neville, and Susan Harrington for assistance with mosquito collections. The assistance of Sarah Power, Margaret Wallace, and Michael Burley with mosquito identification and virus detection is gratefully acknowledged. Technical staff at PathWest provided assistance with PCR and sequencing, and Stephen Davis kindly performed the neutralization assays on animal serum from the Northern Territory. Willy Suen, Caitlin O’Brien, and Agathe Colmant assisted with animal experiments. We also thank John Mackenzie for helpful discussion and the Medical Entomology Branch of the WA Department of Health for funding.
Additional financial support was provided by the Department of Health through the Funding Initiative for Mosquito Management in Western Australia. S.H.W. and W.I.L. were supported by the National Institutes of Health (grant no. AI109761, Center for Research and Diagnostics and Discovery, Center for Excellence in Translational Research). D.T.W. was funded by the Australian Government Department of Agriculture and Water Resources.