We investigated the epidemiology of Lyme borreliosis (LB) in Finland for the period 1995–2014 by using data from 3 different healthcare registers. We reviewed data on disseminated LB cases from the National Infectious Diseases Register (21,051 cases) and the National Hospital Discharge Register (10,402 cases) and data on primary LB (erythema migrans) cases from the Register for Primary Health Care Visits (11,793 cases). Incidence of microbiologically confirmed disseminated LB cases increased from 7/100,000 population in 1995 to 31/100,000 in 2014. Incidence of primary LB cases increased from 44/100,000 in 2011 to 61/100,000 in 2014. Overall, cases occurred predominantly in women, and we observed a bimodal age distribution in all 3 registers. Our results clearly demonstrate that the geographic distribution of LB has expanded in Finland and underscore the importance of LB as an increasing public health concern in Finland and in northern Europe in general.
Lyme borreliosis (LB) is an infectious disease caused by the spirochete Borrelia burgdorferi sensu lato and transmitted by the Ixodes spp. ticks. It is characterized by multiple signs and symptoms, varying from the early phase erythema migrans (EM) to neurologic manifestations, arthritis, and acrodermatitis chronica atrophicans and less often to cardiac conduction disorders (1). In the United States, ≈30,000 new LB cases are reported annually to the Centers for Disease Control and Prevention, although current estimates suggest the total number of cases to be 10-fold higher (2–4). In Europe, the annual number of LB cases exceeds 85,000, according to estimates by the World Health Organization (4), and high incidences have been reported from several countries and regions (5–10). The incidence of LB has increased over the past decades in several countries in Europe, the United States, and Canada (4,5,8,11–14). This change might reflect the increased abundance and expanded geographic distribution of Ixodes ticks to new habitats (15–17) but also increased awareness of the infection among healthcare providers and the general population.
LB is a notifiable infectious disease in only some countries in Europe, and the reporting practices and surveillance methods and definitions vary widely. Because of absent or inadequate national surveillance systems for LB observations (8), most epidemiologic data are derived from studies performed on populations with increased risk or in LB-endemic regions (6,18,19). In Finland, the epidemiology of LB was previously investigated in 1988 (20), but increased abundance and northward distribution of Ixodes spp. ticks in northern Europe (including Finland) have been more recently reported (15,21,22).
Finland has well-established health registers in place, maintained by the National Institute for Health and Welfare (NIHW), facilitating population-based epidemiologic analyses of infectious diseases. Research results based on the register data of Finland are likely to reflect the epidemiologic situation of LB in northern Europe. In this study, we investigated the incidence and geographic distribution of clinically diagnosed LB (i.e., erythema migrans [EM]) for the period 2011–2014 and those of microbiologically confirmed LB for the period 1995–2014, covering the whole of Finland.

To analyze the demographic characteristics, seasonality, and geographic distribution of LB, we reviewed data from the National Infectious Diseases Register (NIDR), National Hospital Discharge Register (Hilmo), and the Register for Primary Health Care Visits (Avohilmo). All 3 registers are maintained by NIHW.

Routine surveillance of LB in Finland is laboratory based. Since 1995, microbiologic laboratories performing LB diagnostics in Finland notify NIDR electronically of any positive findings (i.e., serologic or molecular confirmation). Each notification includes the following information: specimen date, each patient’s unique national identity code, date of birth, sex, and place of residence. For this study, we extracted all microbiologically confirmed LB cases primarily representing disseminated LB infections from NIDR that were reported during 1995–2014. Multiple notifications for the same LB case received within a 3-month period were combined as 1 case.

Avohilmo and Hilmo Registers for Outpatient and Inpatient Healthcare Visits

According to national guidelines in Finland, when a typical EM is observed after a possible tick exposure, it is diagnosed clinically without any laboratory testing by general practitioners in the primary healthcare setting. Since 2011, these outpatient healthcare visits from the primary healthcare units (municipal health centers and health center wards) have been registered under Avohilmo. These cases are not reported to NIDR because the laboratory diagnosis is missing. Notifications in Avohilmo include the patient’s national identity code, age, sex, place of healthcare service, information concerning healthcare admission, investigations, treatment, and discharge diagnoses according to the International Classification of Diseases, 10th Revision (ICD-10). LB cases in Avohilmo were defined as illnesses diagnosed with the ICD-10 code A69.2 (“Lyme borreliosis”). Only the first discharge of each patient was included to avoid recurrent visits with the same diagnosis code being analyzed multiple times in the study. We used Avohilmo data to estimate the number of clinically diagnosed LB cases and simultaneously improve the estimate of the total number of LB cases in Finland during 2011–2014.
Another register, Hilmo, contains nationwide linkable data on all inpatient hospital discharges during 1996–2014 and is comparable to Avohilmo by the notification information; however, LB cases registered under Hilmo for the most part represent disseminated disease. We used Hilmo data to determine the proportions of different clinical manifestations of disseminated LB cases. We have provided detailed descriptions of LB case definitions, diagnostic practices, and laboratory methods used in routine diagnostics (online Technical Appendix Methods).

We calculated the crude estimation of the total number and incidence of LB in Finland by summing clinically diagnosed (Avohilmo) and microbiologically confirmed cases (NIDR) together on the basis of 2 assumptions. First, the number of cases of EM diagnosed clinically in the primary healthcare setting does not substantially overlap with the microbiologically confirmed cases representing disseminated LB cases, as validated by individual-level register-linkage studies (J. Sane, unpub. data). Second, on average, 70% of all LB diagnoses are appropriately coded with the ICD-10 code A69.2 in Avohilmo by the general practitioners (M. Virtanen, unpub. data).
In the time trend analysis by HDs, we considered microbiologically confirmed LB cases in NIDR and outpatient LB cases in Avohilmo. We used Poisson regression for the trend analyses, and statistical significance was defined as p<0.01. We performed the analyses with Stata version 14.0 (StataCorp LLP, College Station, TX, USA). We calculated the average annual incidences of the microbiologically confirmed LB cases over 4 different periods: 1995–1999, 2000–2004, 2005–2009, and 2010–2014. We used data from the National Population Information System as denominators to calculate annual incidence rates and to calculate age- and sex-specific average annualized incidence rates. 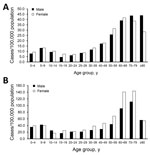 Figure 2. Incidence rates of microbiologically confirmed Lyme borreliosis cases reported in the National Infectious Diseases Register during 1995–2014 (A) and clinically diagnosed cases reported in the Register for Primary Health Care Visits...
Most (54.0%) microbiologically confirmed cases occurred in women (n = 11,373). We observed a bimodal age distribution, with high incidence rates occurring in the age group of 5–9 years in both sexes, after which incidence again increased from the age of 40 years, peaking in the age group of 60–69 years among women and >70 years in men (Figure 2, panel A). We did not observe any other significant sex-specific differences in incidences across age groups.
Out of the clinically diagnosed cases, 59.7% occurred in women (n = 7,042). Again the age distribution was bimodal, but the second peak occurring in the age groups 60–79 years was notably discernble (Figure 2, panel B). In these age groups, LB incidence was distinctively higher among women than among men (on average 142/100,000 among women and 111/100,000 among men). Case-patients were predominantly female across the age groups except in children 5–14 years of age and persons >80 years of age.
Regarding hospital discharges, we identified a total of 10,402 cases with an LB diagnosis (56.2% of case-patients were female); incidence increased from 0.4/100,000 population in 1996 to 19/100,000 in 2014. We have provided a detailed description of characteristics of case-patients and the different clinical manifestations of disseminated LB (Technical Appendix[PDF - 387 KB - 4 pages] Results).

Figure 4. Monthly distribution of microbiologically confirmed Lyme borreliosis cases reported in the National Infectious Diseases Register during 1995–2014 and clinically diagnosed cases reported in the Register for Primary Health Care Visits during...
Microbiologically confirmed LB cases were reported throughout each year, although we observed a pronounced peak in seasonality in September (14.4% of all LB cases during 1995–2014) (Figure 4). More than 50% of LB cases were reported during August–November. For clinically diagnosed LB cases, seasonality was even more pronounced, and only a few cases were reported during the wintertime in Finland (November–April). Most cases (≈75%) occurred during June–September, with the peak in July (22.1% of all LB cases) and August (21.0%). Year-to-year variation in seasonality was minor among microbiologically confirmed and clinically diagnosed cases (data not shown).

This work was supported by the University of Turku, NIHW, and the Academy of Finland. The funders of the study had no role in study design, analysis, or writing of the report.