Walking the Dog, All the Way to Better Health: MedlinePlus Health News

Walking the Dog, All the Way to Better Health: MedlinePlus Health News

Walking the Dog, All the Way to Better Health

Even in bad weather, seniors get about 30 minutes of daily activity by taking care of their pet 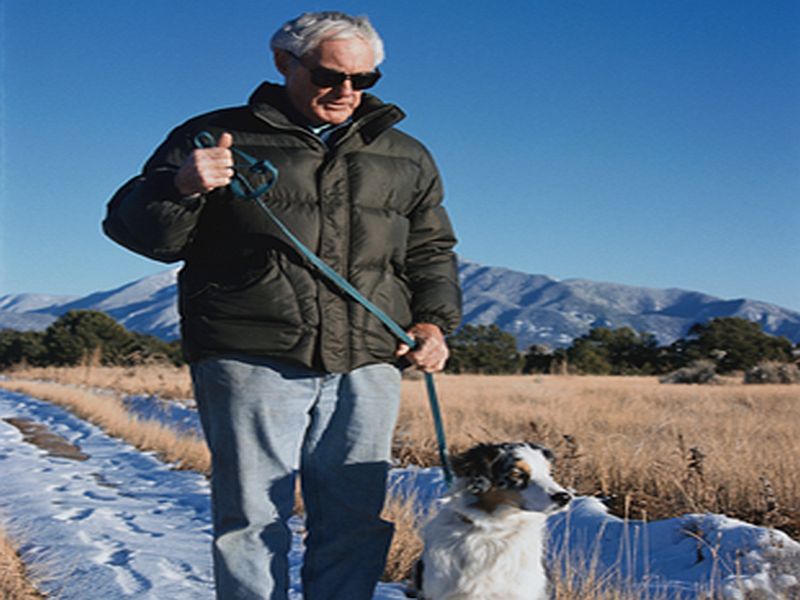 TUESDAY, July 25, 2017 (HealthDay News) -- Your dog may be more than your furry companion -- new research suggests it may also be an effective personal trainer.
The study found that dog walking gives a significant boost to older adults' exercise levels year-round.
Researchers looked at more than 3,000 older adults in England. Dog owners who walked their pooch got an average of 30 minutes more physical activity a day than other participants.
The dog walking-linked boost in activity was especially noticeable in the winter when days are shorter, colder and wetter, the study authors said.
"We found that dog walkers were much more physically active and spent less time sitting overall. We expected this, but when we looked at how the amount of physical activity participants undertook each day varied by weather conditions, we were really surprised at the size of the differences between those who walked dogs and the rest of the study participants," said study lead author Yu-Tzu Wu, of the University of Cambridge.
And, project leader Andy Jones said, "We were amazed to find that dog walkers were on average more physically active and spent less time sitting on the coldest, wettest and darkest days than non-dog owners were on long, sunny and warm summer days." He is a professor at Norwich School of Medicine, at the University of East Anglia.
"The size of the difference we observed between these groups was much larger than we typically find for interventions, such as group physical activity sessions that are often used to help people remain active," Jones added in a university news release.
The researchers noted that owning a dog is not a good idea for all older adults due to the demands of looking after a pet, but said their findings suggest new ideas to increase physical activity.
"Physical activity interventions typically try and support people to be active by focusing on the benefits to themselves, but dog walking is also driven by the needs of the animal. Being driven by something other than our own needs might be a really potent motivator and we need to find ways of tapping into it when designing exercise interventions in the future," Jones said.
The findings were published July 24 in the Journal of Epidemiology and Community Health.
SOURCE: University of East Anglia, United Kingdom, news release, July 24, 2017
HealthDay
Copyright (c) 2017 HealthDay. All rights reserved.
News stories are written and provided by HealthDay and do not reflect federal policy, the views of MedlinePlus, the National Library of Medicine, the National Institutes of Health, or the U.S. Department of Health and Human Services.