By Sally Robertson, BScMay 22, 2017
America’s top pediatricians are advising parents not to give fruit juice to children during their first year of life. It offers no nutritional benefit to babies this young and is not as healthy as parents tend to think, they warn. 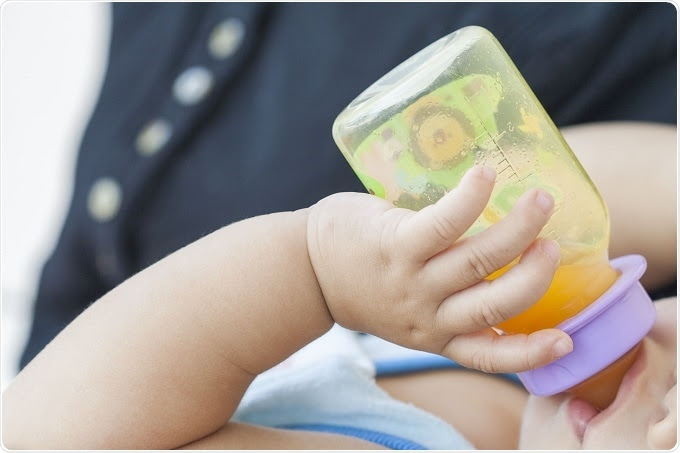 Credit: PHENPHAYOM/Shutterstock.com
The American Academy of Pediatrics (AAP) has updated its policy statement on fruit juice, which had previously advised against giving juice to children under 6 months of age. This timeframe has now been extended to one year, with pediatricians saying juice can take the place of what babies really need, which is breast milk or formula and the protein, fat and minerals they contain. It may also account for the increasing rates of obesity and tooth decay in children, evidence suggests.

This is the first time the policy has been updated since 2001 and the new statement will be published in the June issue of Pediatrics. According to the authors, fruit juice can be a healthy part of the diet among children aged 1 year and older when it is included as part of a well-balanced diet.
Stephanie Meyering, spokeswoman for the Juice Products Association says it is completely unnecessary to give juice to children aged under 1 year, but that real fruit juice “is a nutritious complement to whole fruit in a balanced diet” for toddlers and older children.
The update may come as a surprise to parents who had thought fruit juice was good for babies and even as healthy for them as whole fruit. However, lead author of the new statement, Steven Abrams (University of Texas, Austin) says whole fruit contains more fiber than fruit juice and is less of a pure sugar intake.
For example, four ounces of apple juice contains no fiber, 13 grams of sugar and 60 calories, whereas half a cup of apple slices contains 1.5 grams of fiber, 5.5 grams of sugar and 30 calories.

We want kids to learn how to eat fresh foods. If you assume fruit juice is equal to fruit, then you’re not getting that message,”
Steven Abrams, University of Texas.

The new statement also recommends limiting fruit juice intake to four ounces per day for children aged 1 to 3 years and to six ounces a day for those aged 4 to 6 years. For children aged 6 to 18 years, the recommended daily intake has been changed from 12 ounces to 8 ounces.
“We know that excessive fruit juice can lead to excessive weight gain and tooth decay,” says Abrams. “Pediatricians have a lot of information to share with families on how to provide the proper balance of fresh fruit within their child’s diet.”
Sources:
Publicado por salud equitativa en 11:52