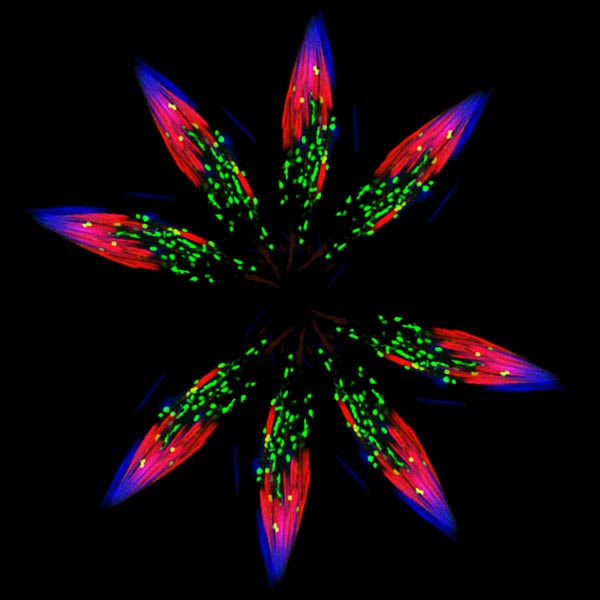 Spermatids—one stage in the formation of sperm—in the fruit fly (Drosophila). Credit: Sigi Benjamin-Hong, Rockefeller University (modified).
Although it looks like a bursting firework from a Fourth of July celebration, this image actually was created from pictures of spermatids—one stage in the formation of sperm—in the fruit fly (Drosophila). Drosophila is an organism that scientists often use as a model for studying how cells accomplish their amazing tasks. Drosophila studies can help reveal where an essential cellular process goes wrong in diseases such as autoimmune conditions or cancer. Cell death, or apoptosis, is one of these processes.
Almost every animal cell has the ability to destroy itself via apoptosis. Apoptosis is important because it allows the body both to develop normally and get rid of dangerous and unwanted cells when it needs to later in life, such as when cells become cancerous. Many different signals both within and outside the cell influence whether apoptosis happens when it should, and abnormal regulation of this process is associated with some diseases. Hermann Steller

and colleagues at Rockefeller University in New York City study Drosophila and mammalian cells to tease apart the steps of apoptosis and the many molecular signals that regulate it.
Proteins called caspases play a key role in apoptosis as well as inflammation and other cell processes. One way that cells slow or prevent cell death from happening before it should is to break down and recycle caspases. The image above shows parts of the protein-recycling system that takes place in Drosophila’s spermatid. Fibers called actin within the cell’s skeleton (red) pull proteins, including caspases, to be recycled to small structures (green) called proteasomes. The proteasomes in turn break the proteins into parts for reuse. Spermatid nuclei are shown in blue. Proteasomes do a lot of protein recycling during the formation of sperm, when most proteins in the cell are removed.
When a cell needs to induce apoptosis, it removes caspase inhibitors. This allows caspases to carry out the orderly destruction of cell proteins, which is their role during apoptosis. The Rockefeller scientists have identified the proteins that regulate caspases, allowing them to carry out their normal roles. In some diseased cells, this process can go awry.
In a condition such as cancer, caspase activity can rise and yet cells may not induce apoptosis, contributing to out-of-control cell growth. In neurodegenerative diseases, cells may hyperactively trigger apoptosis so that cells die when they shouldn’t. This suggests that understanding how to modify a step in the recycling process could lead to new treatments for some types of cancer, stroke and autoimmune and neurodegenerative diseases. The Rockefeller researchers, for example, have identified substances that can block high levels of caspase recycling without completely shutting off normal protein recycling processes. They also have found a way cells can stimulate their formation of proteasomes to increase recycling capacity when damaged proteins are building up. Learning how too much or too little protein recycling or apoptosis may cause diseases could identify new cell-level targets for therapies.
This research is funded in part by NIGMS under grant RO1GM060124.
Publicado por salud equitativa en 8:11