Sexually transmitted infections: By any other name, they're preventable | Health.mil

Sexually transmitted infections: By any other name, they're preventable | Health.mil

Sexually transmitted infections: By any other name, they're preventable 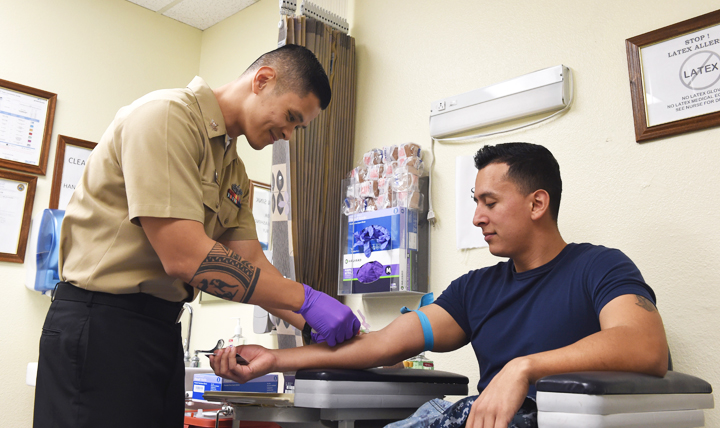 
FALLS CHURCH, Va. — The term for germs spread through sexual contact has changed over the years, from venereal diseases to sexually transmitted diseases and now, sexually transmitted infections or STIs. But one thing hasn’t changed: They’re avoidable.
“STIs are totally preventable by practicing abstinence or monogamy, or using latex condoms 100 percent of the time,” said Dr. Don Shell, director of disease prevention, disease management, and population health policy and oversight in the Office of the Assistant Secretary of Defense for Health Affairs, Health Policy Oversight.
STIs is the preferred term because it’s more precise, said Dr. Jose Sanchez, deputy director of the Armed Forces Health Surveillance Branch. The bacteria and viruses spread through oral, anal, or genital contact are infections that can cause diseases such as cancers of the mouth, throat, anus, rectum, and penis. They also can cause serious health problems including sterility.
According to the Centers for Disease Control and Prevention, men are less likely than women to get some STIs because the penis is a less penetrable and receptive breeding environment for germs than the vagina. When men do get STIs, they’re more likely than women to have symptoms, and to notice them. So men are more readily able to get STIs diagnosed and treated.
Men need to be vigilant about prevention and treatment, Shell said, not only for their own health but for the health of their sexual partners.
“Untreated STIs can lead to serious health complications,” he said. Chlamydia, for example, is a common STI that results in few complications in men. But in women, it can lead to pelvic inflammatory disease, an infection of the reproductive system organs that may result in infertility.
Syphilis rates are rising in military as well as civilian communities. According to a study published in the September 2015 issue of “Medical Surveillance Monthly Report,” the number of syphilis cases among active-duty service members rose 53 percent from January 2010 through August 2015. Men accounted for almost 89 percent of syphilis cases, and their rates steadily increased every year during the surveillance period. Rates were highest among servicemen 20 to 29 years old.
Medical experts say rising syphilis rates are a significant public health concern because people with syphilis are more likely to have human immunodeficiency virus, or to become infected with it. HIV attacks the immune system and can lead to the incurable disease AIDS. The sores caused by syphilis bleed easily, providing a way for HIV to enter the body during sex. In the MSMR study, about 25 percent of servicemen with syphilis also had HIV.
Bacterial STIs such as syphilis, chlamydia, and gonorrhea can be cured through antibiotics, though some are becoming alarmingly resistant to them, Sanchez said. But viral infections such as human papillomavirus or HPV and herpes are incurable. Medications can manage the symptoms for some viral as well as bacterial STIs.
“The good news is that most STIs are treatable,” Sanchez said. “So we can make an impact on military readiness if we can rapidly detect trends, establish early screenings and diagnostics, and enforce effective treatment strategies.”
Servicewomen are screened for some STIs as part of the annual wellness exam, but servicemen aren’t. All service members are screened for HIV every two years, and before and after deployments. They’re also screened when it’s clinically indicated by health care providers based on symptoms or answers to routine questions about sexual partners and practices. Those who test positive can remain in uniform as long as they’re capable of performing their military duties.
Sanchez said a growing STI concern is HPV, which refers to a group of related viruses. “Of all the STIs we can detect via testing, by far the highest rates of infection are for HPV,” he said.
Nearly all sexually active individuals will contract HPV, Shell said. In many cases, it goes away on its own. If not, it can eventually cause health problems including genital warts and cancer. Vaccines can prevent HPV infections, but they’re recommended for people before they become sexually active. The CDC has recommended HPV vaccination of girls since 2006 and of boys since 2011 to include two doses at ages 9 through 14 years.
Sanchez collaborated with other researchers in an HPV study of 200 servicemen that was published in the May 2015 issue of “Sexually Transmitted Diseases.” Almost 15 percent were already infected upon entering military service. This percentage was higher than what had been previously reported among the male civilian population, Sanchez said. Within 10 years of military service, an additional 34 percent had become infected with HPV.
“This study offered evidence of the potential benefit of an HPV vaccination program for servicemen, Sanchez said. “Preventing HPV infections decreases health problems and long-term health care costs, and increases readiness of the force.”
Publicado por salud equitativa en 8:10