In a bid to make the world's first while-you-wait test for breast cancer, European scientists are developing a comfortable hemispherical bowl lined with laser sources and ultrasound detectors with the potential to reduce the stages in spotting the disease into a single appointment. 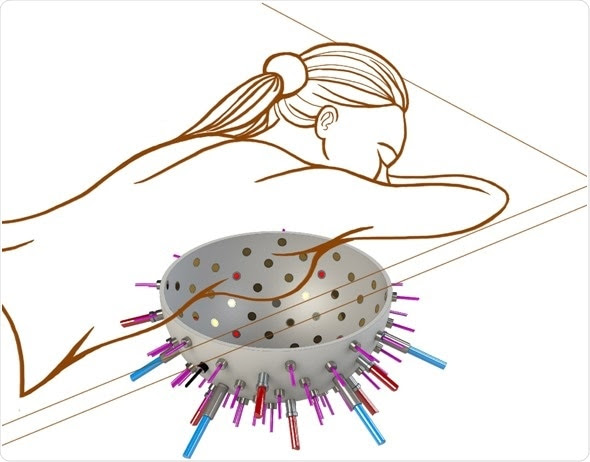 Current breast cancer diagnosis can be distressing and painful over a number of weeks.
Multiple stages can involve visiting a GP, being sent to a specialist for an x-ray mammogram, having an ultrasound, before undergoing a needle, a punch or a vacuum assisted biopsy, as well as placing one breast at a time between two metal plates in a painful clamp.
However, a new imaging system being developed by scientists at the University of Twente, in the Netherlands intends to remove the discomfort and uncertainty involved in a diagnosis.
The device employs both light and sound together in a technique called ‘photoacoustics’, combining lasers and photonics with ultrasound detection.
The size of a hospital bed, a patient lies face down placing their breast snugly into the ‘reader’, a hemispherical ‘bowl’ lined with up to a hundred optical fibers, and several ultrasound detectors.
Multiple images of a suspect breast and tumor are then acquired from dozens of different angles before assembling the multiple shots into a single 3D image.
The ‘PAMMOTH’ (or “Photoacoustic Ultrasound Mammoscopy for evaluating screening-detected abnormalities in the breast”), hopes to lead the research into photoacoustic, real-time 3D imaging of suspicious lesions. Project Coordinator Srirang Manohar explains:
“We are creating an imaging device that we hope will reduce all of the stages involved in spotting breast cancer into one convenient appointment in order to reduce time, uncertainty and the number of unnecessary biopsies. We intend to make breast cancer diagnosis a one-stop-shop, while you wait.”
Light and Sound
It works by sending short pulses of light into the breast towards the suspected lesion. Some of the delivered energy will be absorbed in the tissue and converted into heat, leading to transient thermoelastic expansion, or a mechanical ‘push’ signal from the suspected tumor.
Ultrasound detectors on the surface of the breast, from the hemispherical reader ‘bowl’ where the breast is placed, can then detect and measure these ‘push’ signals before analyzing them on site. Here the imager can look into the haemoglobin (the oxygen-carrying protein in the blood) activity within the suspected tumor.
Since tumors consume oxygen at high rates to survive, lower oxygenation levels around a suspect lesion could tell a physician that a suspect lump is more likely to be a malignant growth than not.
The imager employs a multi-wavelength illumination in the near-infrared wavelength region to extract information about blood oxygenation, using PAMMOTH’s own image reconstruction methods.

Aggressive or Benign
As part of the PAMMOTH team, researchers at University College London (UCL) are working on the mathematics, the image reconstruction and the analysis of the signals to determine how aggressive a tumor could be.
By gathering key information about the haemoglobin and oxygenation levels to and from the suspected tumor, the user could diagnose how likely it would be for the tumor to spread or whether it was simply benign.
“An aggressive tumor has a high metabolism and consumes oxygen more rapidly than normal tissue or a benign lesion. Our instrument and the mathematical approaches we are developing could allow us to check the oxygen saturation rate accurately.”
“If a patient’s oxygen saturation rate was found to be considerably lower than surrounding tissue then we could pinpoint where an aggressive tumour could be, and radiologists could understand how the tumor is likely to behave.” Manohar said.
Unnecessary Biopsies
Current techniques to diagnose breast cancer such as x-ray mammography, ultrasound or MRI scans can sometimes fail to spot a tumor from healthy tissue or a benign abnormality, resulting in tumors that are missed and unnecessary biopsies being carried out.
Unnecessary biopsies and risks of ‘false positives’ (a result incorrectly indicating the presence of a disease) in breast cancer diagnosis are hotly contested topics among medical experts today. As well as the untold stress and discomfort experienced by women all over the world by unnecessary treatments, inefficient diagnoses have an extremely worrying cost implication.
Every year in the US alone, $4 billion is spent on false-positive mammograms and breast cancer over diagnosis among women ages 40-59, according to research published in Health Affairs. A similar picture is played out across Europe with millions of Euros being spent on unnecessary mammograms.
“A prime focus of the PAMMOTH project is to develop an imager and data analysis to be able to intervene at a very early stage. We need to be able to say whether a suspect lesion is good or bad. This technique would have a substantial impact upon the money spent on unnecessary biopsies, as well as to remove the trauma involved in a diagnosis for women around the world,” said Manohar.
The PAMMOTH team hopes to have a prototype ready for 2020 ready for completion in 2021.
Coordinated in the Netherlands at the University of Twente, the PAMMOTH project received a grant of €4,352,007.50 from Horizon 2020 via the Photonics Public Private Partnership.
Participants from seven European countries include: (Netherlands) PA Imaging R&D BV, Stichting Medisch Spectrum Twente; (United Kingdom) University College London; (France) Imasonic SAS; (Germany) TP21 GMBH; (Switzerland) Universitaet Bern; (Czech Republic) Vysoke Uceni Technicke V Brne; (Lithuania) Ekspla UAB.
Source:
http://www.photonics21.org/
Publicado por salud equitativa en 13:13