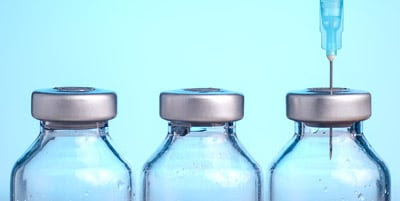 How Flu Vaccines Are Made

How Influenza (Flu) Vaccines Are Made

The most common way that flu vaccines are made is using an egg-based manufacturing process that has been used for more than 70 years. Egg-based vaccine manufacturing is used to make both inactivated (killed) vaccine (usually called the “flu shot”) and live attenuated (weakened) vaccine (usually called the “nasal spray”).
The egg-based production process begins with CDC or another laboratory partner in the WHO Global Influenza Surveillance and Response System providing private sector manufacturers with candidate vaccine viruses (CVVs) grown in eggs per current FDA regulatory requirements. These CVVs are then injected into fertilized hen’s eggs and incubated for several days to allow the viruses to replicate. The virus-containing fluid is harvested from the eggs. For flu shots, the influenza viruses for the vaccine are then inactivated (killed), and virus antigen is purified. The manufacturing process continues with purification and testing. For the attenuated nasal spray vaccine, the starting CVVs are weakened viruses and go through a different production process. FDA tests and approves vaccines prior to release and shipment.
There are many different manufacturers that use this production technology to make flu vaccines for use in the United States. This production method requires large numbers of chicken eggs to produce vaccine and usually takes longer than other methods used to produce vaccine.

There also is a cell-based production process for flu vaccines, which was approved by FDA in 2012. Until recently, this production process also began with egg-grown CVVs per FDA regulations. However, on August 31, 2016, FDA issued an approval for Seqirus, the sole FDA-approved cell-based flu vaccine manufacturer in the United States, to use cell-grown CVVs. The process of creating cell-based flu vaccines involves several steps. First, the World Health Organization (WHO) recommends cell-grown CVVs for distribution to manufacturers. Next, manufacturers inoculate the CVVs into cultured mammalian cells (instead of into eggs) and allow them to replicate for a few days. Then, the virus-containing fluid is collected from the cells and the virus antigen is purified. The manufacturing process continues with purification and testing. Finally, FDA tests and approves the vaccines prior to release and shipment.
Cell-based flu vaccine production does not require chicken eggs because the vaccine viruses used to make vaccine are grown in animal cells. Cell culture technology has the potential for a faster start-up of the flu vaccine manufacturing process. For more information, see CDC’s Cell-Based Flu Vaccines webpage.

There is a third production technology for flu vaccines that was approved for use in the U.S. market in 2013 and that involves using recombinant technology. This production method does not require an egg-grown vaccine virus and does not use chicken eggs at all in the production process. Instead, manufacturers isolate a certain protein from a naturally occurring ("wild type") recommended vaccine virus (the HA protein, which induces an immune response in people). These proteins are then combined with portions of another virus that grows well in insect cells. This “recombinant” vaccine virus is then mixed with insect cells and allowed to replicate. The flu HA protein is then harvested from these cells and purified. The purified protein is packaged while waiting for FDA testing and approval to release lots. Currently, recombinant flu vaccine is the only 100% egg-free vaccine on the U.S. market.
There are other vaccines on the U.S. market that use similar recombinant manufacturing processes. This process can produce vaccine in the shortest amount of time because it is not dependent on an egg supply or limited by the selection of vaccine viruses that are adapted for growth in eggs. There is one influenza vaccine produced using recombinant technology approved by the FDA for use in the United States at this time.
CDC and FDA monitor the safety of all vaccines licensed in the United States, including seasonal influenza vaccines. More information about the safety of egg-based, cell-based and recombinant influenza, including adverse events, contraindications and precautions, screening, and safe vaccine administration is available at Seasonal Influenza Vaccine Safety: A Summary for Clinicians.