Sponsored Content by Bruker BioSpin - NMR, EPR and ImagingMay 30 2017
Asymmetric left ventricular hypertrophy, also known as hypertrophic cardiomyopathy (HCM), is associated with high mortality in young athletes. There is speculation that, in addition to disturbances of calcium handling proteins, a genetic mutation may be involved in the pathogenesis of HCM. 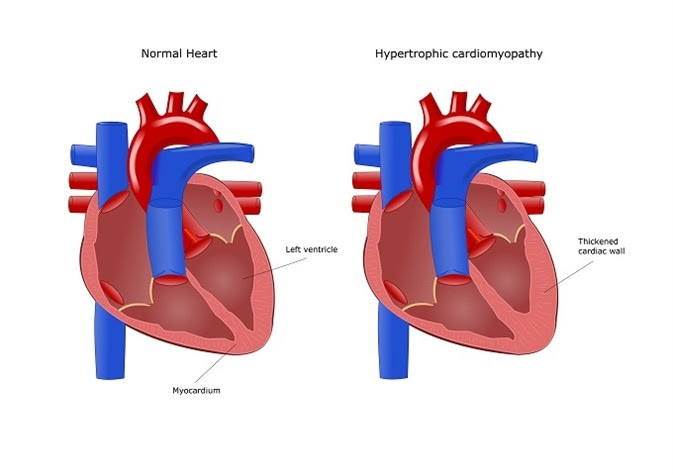 Credit: ellepigrafica/Shutterstock.com
The cardiac-specific junctophilin 2 (JPH2) gene, which is part of the junctional membrane complex, has recently been implicated in the cardiovascular disorder. This gene modulates calcium release into the sarcoplasm reticulum while potentially playing a direct role in cardiac remodeling. Researchers believe that a mutation of the JPH2 may be causally linked to HCM in addition to modifying intracellular calcium signaling.

The genetic link in HCM

The mutations involved in HCM are commonly associated with the MYH7, MYBPC3, TNNT2, and TNNI3 genes.1 A mutation usually occurs in at least one sarcomeric gene, a gene which encodes proteins for myofilaments that power normal heart contraction. Nonsarcomeric genes, including genes associated with intracellular calcium handling, are also associated with HCM development.
Proteins produced from the MYH7 gene represent the major components of the thick filament found in sarcomeres, which are the basic elements involved in muscle contraction. In the MYBPC3 gene, the produced protein is responsible for providing structural support to heart tissue and assisting in regulating muscle contractions.
Other genes, such as TNNT2 and TNNI3, provide the information for generating cardiac troponin T and troponin I, a complex that ultimately controls muscle contraction and relaxation. Understanding the importance of these genes, it’s clear that possible mutations may impair the normal functioning of the heart.
Currently, there is some evidence to prove a causality between genetic mutations and HCM, and one animal study has come close to providing more insight into this phenomenon.

Genetic mutations and HCM: is there a connection?

A study from Quick AP et al. published in the journal JACC: Basic to Translational Science has reported on a human HCM patient with a mutation of the JPH2 gene in a proband and who was also sarcomeric mutation negative.2 In this instance, there was a serine substitution for alanine on the gene. The patient also had progressive septal and left ventricular (LV) thickening as shown on specialized echocardiography and cardiac bright-blood magnetic resonance imaging (MRI).
Click here to download Bruker's MRI Upgrade program
To determine whether the patient’s genetic mutation was causally linked with HCM, researchers created a mouse model with the corresponding A399S mutation. The driving force behind determining causality is the hope that there may be a genetic approach for managing HCM. Ultimately, the mice used in this animal model underwent echocardiographic imaging at the level of the LV papillary muscles.
Click here to go to Bruker's MRI software downloads page
A Bruker BioSpin 9.4-T magnet was used to facilitate cardiac magnetic resonance (CMR) imaging in the animal model. Bruker BioSpin offers one of the most comprehensive supply of MRI and preclinical imaging tools for molecular characterization, including instrumentations used in EPR, NMR, preclinical MRI, optical imaging, Time-Domain (TD) NMR, and microCT, among other applications.
ParaVision 5.1, a Bruker MRI software, was then used to collect cine images of bright-blood in a fast low-angle shot sequence.
Intracellular calcium handling in ventricular myocytes was also studied to enable deeper understanding of the mechanisms underlying a JPH2 mutation’s potential causality association with HCM. Consistent with faster calcium reuptake into the sarcoplasmic reticulum in A399S myocytes, there was higher SERCA2a activity.
There were morphological aberrations in the mice as evidenced by MRI and echocardiography findings. Additionally, there was an increase in interventricular septal diameter and an increase in septal size and thickness relative to the free wall. Using CMR imaging, researchers were able to observe asymmetric left ventricular hypertrophy, particularly in the basal septum. There was also an indication of fibrosis via delayed myocardial enhancement. Obstruction in the subaortic outflow tract was also noted.
The CMR imaging techniques using the Bruker instruments resulted in the most reliable measurements of the animal model’s cardiac health, as the conventional echocardiographic analysis failed to provide the necessary information.
Based on the results from the CMR imaging tests, researchers of the study were convinced that the JPH2 mutation is causally associated with HCM development. Results from this study, in addition to many others, will hopefully result in future research that will fuel the development of gene-specific therapies for the treatment of HCM.