By Dr Ananya Mandal, MDJune 15, 2017
According to latest research, eating fried potatoes could be connected to an early death. The study published in the American Journal of Clinical Nutrition adds that boiled and steamed potatoes do not carry the same risk as fried potatoes. Fried potatoes studied included French fries, potato chips and hash browns. 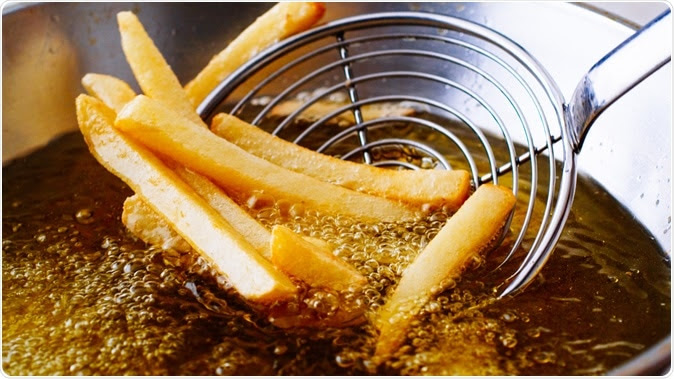 Image Credit: Jack Jelly / Shutterstock
There have been little or no studies on the effects of fried potatoes on mortality say researchers in their study. For this new study the team of researchers followed 4,400 people of ages between 45 and 79 and monitored them for eight years. These were North Americans predominantly. Lead researcher Dr. Nicola Veronese, with Italy’s National Research Council, along with his team of researchers found that those who consumed fried potatoes two to three times a week doubled their risk of an early death compared to those who did not do so.
The participants were taken from another similar cohort or group of participants called the Osteoarthritis Initiative cohort study. Each of the participants was given a Block Brief 2000 food-frequency questionnaire. This had food consumption frequency that the participant had to indicate. The frequencies were classed as follows;
Risk of death and consumption was analyzed after taking into account other factors that could lead to early death.
Results showed that there were around 58% women in the study group. During the eight years of the study, 236 participants died. The participants were classed as lowest consumers of fried potatoes and highest consumers of fried potatoes. On analysis the risk of an early death was found to be highest among those who consumed fried potatoes more than two times a week.
According to the researchers it could be the cooking oil that is high on trans fats that can explain the cause and association between fried potatoes and early death. These trans fats are typically bad for the heart and have been known to lead to heart disease like atherosclerosis that leads to increased risk of heart attacks and strokes. Veronese adds that apart from these trans fats there are other factors such as lack of exercise and being obese and overweight that can be the cause behind early deaths due to fried potatoes consumption.
The National Potato Council however adds that potatoes as such are not the dietary culprits regardless of how they are consumed. It is a healthy vegetable that has rich contents of vitamin C and contains fewer calories. Thus this study should not be a reason to chuck potatoes from the diet, advise experts. Authors of the paper advise that there should be further and larger studies in order to conclusively determine the cause-effect relationship between overall fried potato consumption and death. Until they non-fried potatoes are safe and can be consumed and fried ones may be consumed in moderation suggest nutrition advisers and experts.
Source:
http://ajcn.nutrition.org/content/early/2017/06/07/ajcn.117.154872.abstract?papetoc
Publicado por salud equitativa en 9:19