By Dr Ananya Mandal, MDMay 30, 2017
CRISPR-Cas9 is a revolutionary new gene-editing technology that has been called “molecular scissors” and has been one of the handiest tools for genetic engineers in the recent times. It makes cutting and pasting gene sequences almost as easy as it sounds. CRISPR has been hailed as a breakthrough in genetic engineering.
This new technology has been used to tap into the main mutation point of some cancers with the ability to tweak them and make changes. It has been touted to be a boon in treating genetic blindness and other genetic diseases in living animals. It could also be used in modification of human embryos in treatment of miscarriage and infertility. Potential uses have been many as were the expectations.

However a study that was published in the journal Nature Methods now shows that this new technology may not be as fool proof as it was earlier believed to be. It may still have to be polished and honed to be able to cut and paste human DNA perfectly. These snags that have been reported in the study include unwanted mutations that may be caused by the technology.
Researchers at the Columbia University were performing a study to attempt correct blindness in mice. They noted that CRISPR was successful in editing a particular gene responsible for blindness. However it also led to an alarming number of mutations in a thousand other unintended and untargeted genes. It has been known earlier that CRISPR may not be absolutely accurate in its target genes but the extent of it was unknown and unreported till now. This study now can help researchers understand the problem in a more extensive manner.
At present there are two reported clinical trials that use CRISPR in humans in China. The trial in United States was stated to begin sometime in the coming year. For these trials, predictive algorithms would be used to identify the areas that could be affected beyond the target gene areas. Thus the technology could be fine tuned and modified to increase its precision. But despite these safeguards in place, scientists are jittery about using this technology in humans too prematurely. 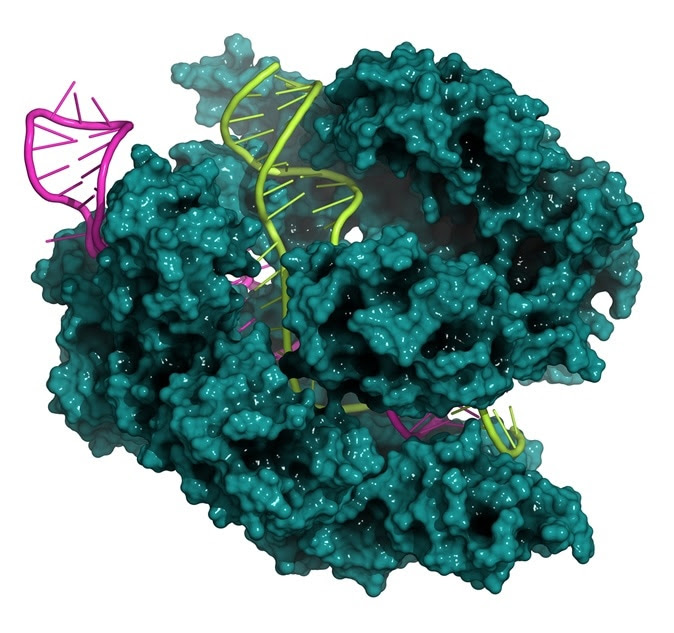 CRISPR-CAS9 gene editing complex from Streptococcus pyogenes. The Cas9 nuclease protein uses a guide RNA sequence to cut DNA at a complementary site. Cas9 protein: teal surface model. Image Credit: olekuul_be / Shutterstock
These predictive algorithms that been used to successfully identify the areas that the technique could affect beyond the target areas in the laboratory settings. But when the same algorithms were applied to the mice that were used for the blindness cure research, the algorithms failed to work. After the experiment, CRISPR has successfully corrected the desired gene leading to restoration of vision in the mice. But two mice suffered more than 1,500 unintended mutations and over a 100 deletions and insertions of genes. These were completely missed by the algorithm. However nothing was immediately found to be wrong in the mice that developed these mutations. They for example did not develop any tumors or cancers that could be pinpointed to the mutations. But far reaching impact of these mutations still remain unknown and a cause for concern especially if they are to be tried in humans.
It is not that researchers have not been working on the precision of CRISPR over the last few years after it was developed. It has been successfully hijacking the bacterial immune system to alter specific DNA sequences. But without necessary safety changes in the technique, it is unlikely that this technology will find many takers beyond the research lab and in the field. More work in the cards for this nascent technology to be effective and safe in humans.
Publicado por salud equitativa en 11:26