Americans Want to Be Fit, But Most Don't Put in the Effort: MedlinePlus Health News

Americans Want to Be Fit, But Most Don't Put in the Effort: MedlinePlus Health News

Americans Want to Be Fit, But Most Don't Put in the Effort 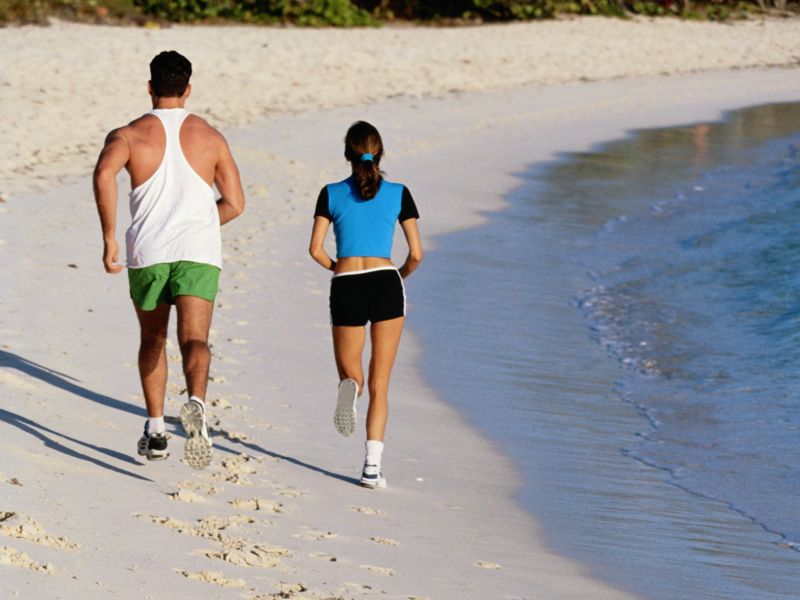 MONDAY, June 19, 2017 (HealthDay News) -- Most Americans want to be in better shape, but few are putting in the work to get there, a new survey shows.
More than three-quarters of U.S. adults said that being in shape and looking good were "very important" to them, the survey found. A similar number wanted to change something about their body appearance.
Many people judged themselves as "too fat," or worried that they were not physically strong enough.
Despite those feelings, only 31 percent said they make exercise a regular "habit." And 45 percent admitted they weren't active at all, according to ReportLinker, a French technology company that did the survey.
The survey, conducted online in May, included more than 500 U.S. adults.
None of the results surprised exercise experts.
It's well-known that most U.S. adults fall short of physical activity recommendations, said Heather Hausenblas, a professor of kinesiology at Jacksonville University in Florida.
In fact, only about one-fifth of Americans meet exercise guidelines, according to the U.S. Centers for Disease Control and Prevention.
For adults, the guidelines call for 2.5 hours of moderate aerobic activity each week, along with some kind of muscle-strengthening exercises at least two days out of the week.
Both the American College of Sports Medicine (ACSM) and the American Heart Association say Americans should exercise for at least 30 minutes five times a week.
But if so many Americans think they're out of shape and want to look better, why aren't they exercising?
For one, body dissatisfaction is not the best motivator.
"If that's the reason you're starting to exercise, you're probably not going to stick with it," said Hausenblas, who studies physical activity and body image.
"On the other hand," she said, "if health reasons are your main motivation, you're more likely to stay active."
That's partly because the health benefits of exercise go beyond the physical. Once people make exercise routine, Hausenblas said, they may notice a "host of psychological benefits," such as feeling more energized and less stressed.
It's effects like those that can help keep people on track, agreed Dr. Pamela Peeke, an ACSM spokeswoman.
"The more that physical activity becomes a habit, and you notice how good you feel, the more you miss it when you're not active," said Peeke, a clinical assistant professor of medicine at the University of Maryland School of Medicine.
Unfortunately, poor body image keeps some people from ever becoming active -- especially women, Peeke said.
"If you feel bad about your body, the last thing you want to do is strut into a gym," she said.
Fortunately, there are plenty of ways to be active other than hitting the gym, Peeke pointed out.
"Get up and walk," she said. "That's the No. 1 way of getting the ball rolling."
Peeke said she avoids the term "exercise," in favor of encouraging people to move whenever they can -- in a world full of escalators, remote controls and desk jobs.
"If you're on the phone, walk around while you talk," she suggested. "If you're at work, use the stairs to get to the bathroom three floors up, instead of using the one on your floor. We need to get creative in our daily lives."
For some people, it's helpful to exercise with others, both Peeke and Hausenblas said.
In the survey, almost one-third of respondents who exercised said they stayed motivated with the help of friends or "exercise buddies."
Others said they used smartphones and other devices to track their progress, such as seeing how many miles they were able to jog.
The type of activity has to be based on personal preferences, too, Hausenblas said.
In the survey, the most popular activity was "training at a fitness center" -- cited by 40 percent of exercisers. About one-third said they jogged, swam or played basketball, while 21 percent took yoga classes.
"What's really important," Hausenblas said, "is that you do things you enjoy. If you like being outside, go outside for a walk. If you like taking a class, do that."
And always remember that it's not about looks or competition, Peeke said. Three-quarters of survey participants admitted that they compared their physiques to others'.
"If you're comparing yourself to other people, you're automatically downgrading your own strengths," Peeke said.
Instead, she advised, focus on your personal strengths, and the more important reasons for staying active.
"Are you doing it for the sake of your well-being, and being there for your grandchildren?" Peeke said. "If your motivations are rooted in love for yourself, that's great. If it's all based on changing your appearance, then you've got a problem."
SOURCES: Heather Hausenblas, Ph.D., professor, kinesiology, Jacksonville University, Jacksonville, Fla.; Pamela Peeke, M.D., spokeswoman, American College of Sports Medicine, and clinical assistant professor, medicine, University of Maryland School of Medicine; ReportLinker survey, May 16, 2017
HealthDay
Copyright (c) 2017 HealthDay. All rights reserved.
News stories are written and provided by HealthDay and do not reflect federal policy, the views of MedlinePlus, the National Library of Medicine, the National Institutes of Health, or the U.S. Department of Health and Human Services.