TickNET, a public health network, was created in 2007 to foster greater collaboration between state health departments, academic centers, and the Centers for Disease Control and Prevention on surveillance and prevention of tickborne diseases. Research activities are conducted through the Emerging Infections Program and include laboratory surveys, high-quality prevention trials, and pathogen discovery.
Through their bites, ticks expose humans to a remarkable array of pathologic agents, including neurotoxins, allergens, bacteria, parasites, and viruses. The clinical features of tickborne illness range from mild to life-threatening, and collectively, tickborne diseases constitute a substantial and growing public health problem in the United States. New agents of tickborne disease are described regularly, and known agents are spreading to new areas.
The most common tickborne disease in the United States is Lyme disease, caused by the spirochete Borrelia burgdorferi. With >37,000 cases reported to the Centers for Disease Control and Prevention (CDC) during 2013, Lyme disease ranks fifth among all nationally notifiable conditions (1,2). Less common but potentially serious tickborne infections include anaplasmosis, babesiosis, ehrlichiosis, spotted fever group rickettsioses, and Powassan virus disease (3). Recent reports of US patients infected with Borrelia miyamotoi (4), an Ehrlichia muris–like agent (5), a novel bunyavirus (6), and a putative new genospecies of Borrelia burgdorferi (B. Pritt, pers.com.) all serve to highlight the potential for discovery of novel tickborne pathogens. In addition, several tickborne diseases of unknown etiology have also been described, most notably STARI (southern tick–associated rash illness). Easily confused with early Lyme disease, STARI is a distinct, idiopathic entity associated with bite of the lone star tick, Amblyomma americanum (7,8). This tick species has also been implicated recently as a cause of IgE-mediated hypersensitivity to red meat and certain chemotherapeutic agents (9). 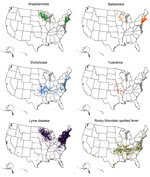 Figure 2. US cases of Lyme disease, ehrlichiosis, anaplasmosis, babesiosis, and spotted-fever group rickettsioses reported to the Centers for Disease Control and Prevention, 2001–2013. Counts include confirmed and probable cases, according to the...
Tickborne diseases pose special challenges for clinicians and public health agencies alike. Although tickborne diseases occur throughout the United States, the distribution of any given disease can be highly focal (Figure 1), and this information must be known and considered by health care providers when assessing patients. In addition, laboratory testing is often limited to serologic assays that require paired samples drawn several weeks apart to confirm recent infection, which complicates the use of laboratory testing for both patient management and public health surveillance. With regard to prevention, tick checks, repellent use, and other personal protective measures, although generally benign and inexpensive, are not especially effective (10). Despite decades of education about these measures, case reports for the more common tickborne diseases continue to increase (Figure 2). Pesticide use can reduce tick abundance (11–13) but has not been proven to reduce tickborne disease in humans (14,15). Lymerix, developed to prevent Lyme disease, is the only vaccine ever licensed in the United States to prevent a tickborne disease in humans, but it was removed from the market during 2003 amidst poor sales and unsubstantiated reports of increased adverse events (16,17).

Dr. Mead is a medical epidemiologist with CDC in Fort Collins, CO. His research interests include medical and public health aspects of Lyme disease, plague, tularemia, and other vector-borne diseases.