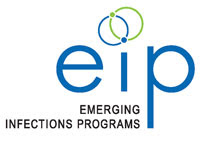 Figure. Prevalence of human papillomavirus (HPV) types among women with a diagnosis of cervical intraepithelial neoplasia grade 2 or 3 or adenocarcinoma in situ, Emerging Infections Program HPV-IMPACT project, 2008–2012. HPV-16 and...
Archived specimens were retrieved for 7,693 (72.2%) of 18- to 39-year-old women with a diagnosis of CIN2+ during 2008–2012. Of these specimens, 6,745 (87.7%) were histologically adequate and underwent DNA testing; HPV DNA was detected in 6,721 (99.6%) of the specimens. The prevalence of HPV types in CIN2+ lesions is shown in the Figure. Our findings confirmed that HPV-16 and -18 (i.e., types targeted by current vaccines) accounted for over half of all lesions in this population-based sample of women with CIN2+. DNA typing data from the project have also been helpful in predicting the effect of the new 9-valent HPV vaccine in the United States.
Vaccination and screening history data were used to demonstrate that proportions of HPV-16– and HPV-18–attributable CIN2+ in women who initiated vaccination at least 24 months before receiving an abnormal screening test result were statistically significantly lower than proportions in unvaccinated women (18). Recent data indicate substantial declines in CIN2+ among women <25 years of age since HPV vaccine was introduced; not all of these declines can be explained by concurrent decreases in the use of screening (19). Investigation is ongoing to determine the extent to which the observed decreases may be attributable to vaccine effect and to further quantify vaccine effectiveness on type-specific lesions.
The HPV-IMPACT project has provided valuable information for monitoring the effect of HPV vaccine among the US population, including data on the type distribution of HPV before widespread introduction of the vaccine. A variety of challenges to developing a sustainable population-based system for monitoring CIN2+ and associated HPV types were identified and addressed during the project’s pilot phase. Since 2011, active surveillance has been ongoing at all 5 EIP sites, and the systems have been periodically evaluated. Laboratories serving the catchment areas are monitored through routine contact with health care providers, regional and local surveys, and other means to ensure completeness of reporting is maintained over time for all women in the catchment areas. Case ascertainment methods are continually updated and refined as the recommended diagnostic terminology evolves. New mechanisms for obtaining complete vaccination histories, such as interviewing case-patients and contacting vaccine providers to verify self-reported vaccination, are being explored. Efforts are ongoing to improve methods for measuring cervical cancer screening rates.
The success of the HPV-IMPACT project exemplifies the flexibility of the EIP network to expand core activities to include emerging surveillance needs beyond acute infectious diseases. Results from this project contribute key information on the effect of HPV vaccination among the US population.
Dr. Hariri is a senior epidemiologist in CDC’s Division of Sexually Transmitted Disease Prevention. Her research interests include the effectiveness of HPV vaccine and its effect on the population and the epidemiology of sexually transmitted diseases.

We gratefully acknowledge Arthur Reingold, William Schaffner, Robert Heimer, Gary Hollick, Jill Sharma, and Danielle Miller for their expert contribution in the planning and design and/or laboratory testing of the project.
This work was supported by the CDC cooperative agreement CIU01000307.
L.M.N. was a consultant/advisory board member for Merck.