A 29-year-old man (contact 1) transported 8 dromedaries from Oman to United Arab Emirates on May 7, 2015 (Table 1). The same day, as part of a national policy for controlling MERS, samples were collected from the dromedaries at a screening center located at the United Arab Emirates border. The samples were tested by reverse transcription PCR (RT-PCR) on May 10 and found to be positive for the MERS-CoV open reading frame (ORF) 1A and upstream of E genes (10). This finding led local public health authorities to conduct active surveillance on humans who had contact with the infected dromedaries.
A sputum sample collected from contact 1 on May 10, 2015, was tested by RT-PCR on May 12 and found to be positive for MERS-CoV; the man was admitted to a hospital the same day. Follow-up respiratory samples obtained on May 13 and 14 were still RT-PCR–positive, but a sample obtained on May 18 was negative. The patient was asymptomatic at hospital admission and throughout his hospital stay (Technical Appendix[PDF - 95 KB - 3 pages]).
Contact 2 was a 33-year-old man who worked at the screening center mentioned above. He had direct contact with the same group of infected dromedaries during the sampling procedures. A nasal aspirate sample was obtained from the man on May 14, 2015, and found to be RT-PCR positive for MERS-CoV. Contact 2 was hospitalized on May 18. A follow-up sample obtained on May 18 was RT-PCR negative for MERS-CoV. Contact 2 was asymptomatic throughout his hospitalization (Technical Appendix[PDF - 95 KB - 3 pages]).
Samples from 32 other persons were also tested by RT-PCR (Technical Appendix[PDF - 95 KB - 3 pages]). None tested positive.
After the initial positive test results, the dromedaries were quarantined. Seven days later (May 14), follow-up nasal swab samples from 5 dromedaries were still positive by RT-PCR (Table 2); the animals also had mucopurulent nasal discharge. The animals were tested for the presence of MERS-CoV–specific neutralizing antibodies (11); all were seropositive. Two 4-month-old calves (ADFCA-HKU1 and ADFCA-HKU2) had the highest virus loads by real-time RT-PCR and the lowest neutralizing antibody titers (Table 2). Nasal swab samples from these 2 dromedaries were also MERS-CoV–positive by rapid antigen testing (12), which suggests the calves were still shedding virus 7 days after the first detection of virus. Virus culture was not attempted. On May 25, 2015, the 2 calves were RT-PCR negative for MERS-CoV, and the whole group of camels was released from quarantine.
Respiratory specimens from the 2 infected humans and the 5 dromedaries that were still positive at the second sampling were analyzed by dideoxy sequencing as previously described (13); the nucleocapsid gene sequences of all dromedary samples were found to be identical. Samples from dromedaries ADFCA-HKU1–3 were selected for further analysis, and a sequence contig encompassing the 3′ end of the ORF1AB gene through the 3′ untranslated region of the MERS-CoV genome (≈8,900 nt; sequence coverage 4) was obtained from each sample. Contigs from the 3 samples were identical, with the exception of a V221I (GTT→ATT) mutation in the ORF4b protein of the sample from dromedary ADFCA-HKU2. The viral RNA content of the 2 human samples available for analysis was too low to provide long PCR amplicons (cycle threshold 35.5 and 36.9 by upstream of E gene assay). However, partial sequences of MERS-CoV spike (466 nt, contacts 1 and 2), ORF3–4a (273 nt, contact 1), and nucleocapsid (451 nt, contacts 1 and 2) gene regions could be detected from the samples. All of these sequences were identical to those deduced from the dromedary specimens. Genomic sequences determined from this study were submitted to GenBank (accession nos. KT275306–KT275315). 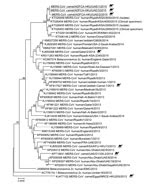