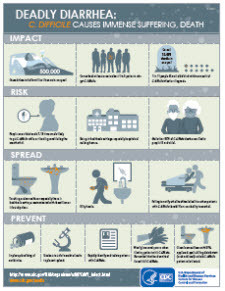 New CDC Study and Blog: National Burden of Clostridium difficile Infections
Clostridium difficile (C. difficile), a germ that causes major colon inflammation and deadly diarrhea, caused almost half a million infections in the United States in a single year, according to a study released today by the Centers for Disease Control and Prevention (CDC).  Approximately 29,000 patients with a C. difficile infection died within 30 days of initial diagnosis from illnesses such as sepsis. Of those, about 15,000 deaths were estimated to be directly attributable to C. difficile infections. 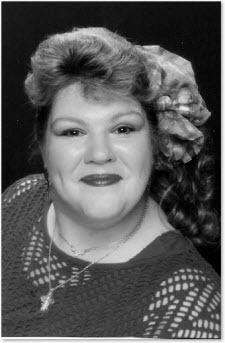 A Nurse Turned C. diff Survivor Shares her Story
C. difficile often causes devastating suffering among people who become infected.  Nurse Nancy Caralla knows this suffering all too well.  She contractedC. difficile while caring for an infected patient and also lost her father to C. difficile.  Turning her experience into a force for prevention, Nancy is now the founding executive director and president of the C diff Foundation, where she aims to raise awareness about C. difficile nationwide.
Hear more about Nancy’s experience and questions she often fields from patients and families stricken by this horrible infection at  http://blogs.cdc.gov/safehealthcare/2015/02/25/c-diff-survivor-and-advocate-shares-her-story-2.
Publicado por salud equitativa en 3:27