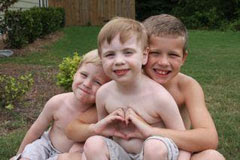 Congenital heart defects (CHDs) are the most common type of birth defect. As medical care and treatment have advanced, babies with a CHD are living longer and healthier lives. Learn more facts about CHDs below.

What are Congenital Heart Defects (CHDs)?

CHDs are present at birth and can affect the structure of a baby’s heart and the way it works. They can affect how blood flows through the heart and out to the rest of the body. CHDs can vary from mild (such as a small hole in the heart) to severe (such as missing or poorly formed parts of the heart).
About 1 in 4 babies born with a heart defect has a critical CHD (also known as critical congenital heart disease).1 Babies with a critical CHD need surgery or other procedures in the first year of life.

Listed below are examples of different types of CHDs. The types marked with a star (*) are considered critical CHDs.

Signs and symptoms for CHDs depend on the type and severity of the particular defect. Some defects might have few or no signs or symptoms. Others might cause a baby to have the following symptoms: 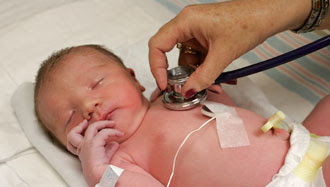 Some CHDs may be diagnosed during pregnancy using a special type of ultrasound called a fetal echocardiogram, which creates ultrasound pictures of the heart of the developing baby. However, some CHDs are not detected until after birth or later in life, during childhood or adulthood. If a healthcare provider suspects a CHD may be present, the baby can get several tests (such as an echocardiogram) to confirm the diagnosis.

Treatment for CHDs depends on the type and severity of the defect present. Some affected infants and children might need one or more surgeries to repair the heart or blood vessels. Some can be treated without surgery using a procedure called cardiac catheterization. A long tube, called a catheter, is threaded through the blood vessels into the heart, where a doctor can take measurements and pictures, do tests, or repair the problem. Sometimes the heart defect can’t be fully repaired, but these procedures can improve blood flow and the way the heart works.

The causes of CHDs among most babies are unknown. Some babies have heart defects because of changes in their individual genes or chromosomes. CHDs also are thought to be caused by a combination of genes and other factors, such as things in the environment, the mother’s diet, the mother’s health conditions, or the mother’s medication use during pregnancy. For example, certain conditions a mother has, like pre-existing diabetes or obesity, have been linked to heart defects in the baby.2,3 In addition, smoking during pregnancy as well as taking certain medications have also been linked to heart defects.2,3
Learn more about research on CHDs »

Living with a CHD

As medical care and treatment have advanced, infants with CHDs are living longer and healthier lives. Many children with CHDs now are living into adulthood. It is estimated that more than two million individuals in the United States are living with a CHD. Many people with a CHD lead independent lives with little or no difficulty. Others might develop disability over time. Some people with a CHD have genetic problems or other health conditions that increase their risk for disability.
Even with improved treatments, many people with a CHD are not cured, even if their heart defect has been repaired. People with a CHD can develop other health problems over time, depending on their specific heart defect, the number of heart defects they have, and the severity of their heart defect. For example, some other health problems that might develop include irregular heart beat (arrhythmias), increased risk of infection in the heart muscle (infective endocarditis), or weakness in the heart (cardiomyopathy). People with a CHD need routine checkups with a cardiologist (heart doctor) to stay as healthy as possible. They also might need further operations after initial childhood surgeries. It is important for people with a CHD to visit their doctor on a regular basis and discuss their health, including their specific heart condition, with their doctor.
Learn more about living with a CHD »