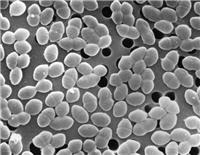 For more images of this bacterium, search the Public Health Image Library

What is vancomycin-resistant enterococci?

Enteroccocci are bacteria that are normally present in the human intestines and in the female genital tract and are often found in the environment. These bacteria can sometimes cause infections. Vancomycin is an antibiotic that is used to treat some drug-resistant infections caused by enterococci. In some instances, enterococci have become resistant to this drug and thus are called vancomycin-resistant enterococci (VRE). Most VRE infections occur in hospitals.
Top of page

What types of infections does VRE cause?

VRE can live in the human intestines and female genital tract without causing disease (often called colonization). However, sometimes it can cause infections of the urinary tract, the bloodstream, or of wounds associated with catheters or surgical procedures.
Top of page

Are certain people at risk of getting VRE?

The following persons are at increased risk becoming infected with VRE:
Top of page

What is the treatment for VRE?

People with colonized VRE (bacteria are present, but have no symptoms of an infection)  do not need treatment. Most VRE infections can be treated with antibiotics other than vancomycin. Laboratory testing of the VRE can determine which antibiotics will work. For people who get VRE infections in their bladder and have urinary catheters, removal of the catheter when it is no longer needed can also help get rid of the infection.
Top of page

How is VRE spread?

How can patients prevent the spread of VRE?

If a patient or someone in their household has VRE, the following are some things they can do to prevent the spread of VRE:

What should patients do if they think they have vancomycin-resistant enterococci (VRE)?

Anyone who thinks they have VRE they must talk with their healthcare provider.
Top of page

For more information about prevention and treatment of HAIs, see the resources below:
Publicado por salud equitativa en 3:49