Few diseases are more tragic or mysterious than amyotrophic lateral sclerosis (ALS), which begins with signs of muscle weakness – often in one limb – and can progress to paralysis and death within a few years.

Rare cases of ALS are hereditary, but in most cases the disease is sporadic, with no known cause. When mutations in the SOD1 protein were first connected to familial ALS in 1993, scientists theorized the discovery would offer clues to sporadic ALS (sALS). Since then, SOD1 has become the most studied protein in ALS research, but there have been doubts about its relevance to the sporadic form of the disease.

A new study in Nature Neuroscience* makes a strong case that the SOD1 protein can indeed contribute to sALS. The study shows that in people with sALS, it is possible to detect SOD1 protein that is genetically normal but has properties similar to mutant SOD1.

"For a long time, there has been a hypothesis that an otherwise normal SOD1 protein could become damaged and acquire toxic properties. Our work shows that this type of SOD1 is actually present in patient tissue," said Daryl Bosco, Ph.D., the first author on the study and an assistant professor of neurology at the University of Massachusetts Medical School in Worcester. The senior author of the study was Robert H. Brown, Jr., M.D., D.Phil., who is chair of the neurology department at the same institution.

ALS is characterized by the death of muscle-controlling nerve cells in the spinal cord, called motor neurons. As these neurons die, the body’s voluntary muscles weaken and waste away. Most patients die from respiratory failure.

SOD1 mutations are responsible for about 2 percent of all ALS cases. They are also the basis for disease in the most commonly studied mouse models of ALS. The mutations change the structure and function of SOD1 in ways that render it toxic to motor neurons. Some studies suggest that mutant SOD1 proteins cause a breakdown of cellular energy factories called mitochondria. Other research suggests they interfere with the transport of molecules and other cellular cargo along the axon, the long appendage that extends from the motor neuron and makes contact with muscle.

These observations go a long way toward explaining the disease process in rare familial cases of ALS. But does SOD1 have any role in sALS?

Dr. Bosco and her colleagues approached that question by making use of an antibody called C4F6. This antibody recognizes the abnormal structure of the mutant SOD1 proteins associated with familial ALS. The researchers found, however, that C4F6 can also detect SOD1 in sALS patients. The antibody lit up SOD1 in spinal cord tissue from four of nine sALS patients who were confirmed negative for SOD1 mutations.

Next, the researchers looked for evidence of SOD1 toxicity in sALS. They isolated SOD1 proteins from sALS patients, and added these proteins to squid axoplasm – which is the cellular material inside very large squid axons. Much like mutant SOD1 proteins, the sALS-associated proteins interfered with axonal transport.

Finally, the researchers explored the kinds of chemical changes that might cause the SOD1 protein to change shape and become toxic in sALS. They exposed purified SOD1 protein to hydrogen peroxide, creating a damaged, "oxidized" form of the protein. This protein reacted with C4F6 and interfered with axonal transport in the squid axon assay.

"Oxidation is just one example of a chemical change that could cause SOD1 to take on toxic properties," said Dr. Bosco. "We are open-minded as to what the actual modifications might be in sporadic ALS."

Based on their findings, Dr. Bosco and her colleagues are attempting to generate a mouse model of sALS. Such a model could provide a useful alternative to mutant SOD1 mice.

Drs. Bosco and Brown received support from the National Institute of Neurological Disorders and Stroke. Dr. Bosco was supported as an early-stage investigator. 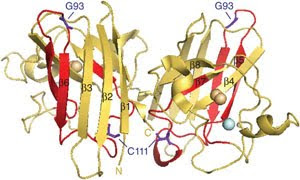